After starting off by building wide area, low-power IoT networks in individual cities, MachineQ, the Comcast-owned industrial IoT unit, is several months into a revised, over-the-top-focused deployment model that enables the company to pursue business in and out of Comcast's US cable footprint and begin to formulate a global services launch strategy.

"When we first started MachineQ, we were out there building networks, strategically, to see what customers and what the market wanted," said Alex Khorram, MachineQ's general manager. 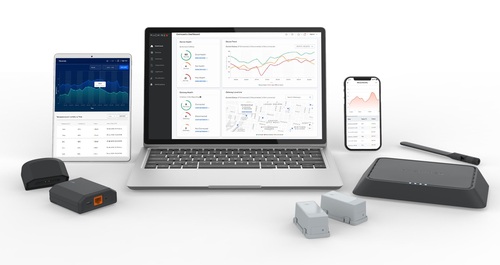 Comcast's machineQ IoT product family features a range of low-power sensors, indoor and outdoor gateways (its flagship indoor 'Area 8c' IoT gateway is pictured at the far right) that are all underpinned by a cloud-powered software platform called MQcentral.

The resulting feedback was that many customers desired "a different relationship with the technology" that enabled them to deploy low-power networks focused on their manufacturing facilities, medical campuses or retail locations. "They just needed the basic tools," Khorram said.

Instead of relying solely on IoT networks built and managed by MachineQ, customers and other potential partners were increasingly interested in more of a do-it-yourself model. They would rather purchase products and software tools from MachineQ that, in turn, put them in position to install the systems, onboard the IoT sensors at their various locations and then have the ability to manage the whole thing. And the general connectivity could either come from Comcast, if available, or from another service provider.

Under this new model, MachineQ sells those products through its own channels and directly through an online store. Its "Starter Kit," for development and testing purposes, features an eight-channel LoRa gateway, a development kit and a one-year software license that runs $199. For customers that are ready for commercial deployment, the company also sells a lineup of indoor and outdoor gateways (including models that support WiFi and Ethernet backhaul or cellular and Ethernet backhaul) and a range of sensors that run on MachineQ's cloud-powered software platform.

MachineQ, which still leans heavily on the LoRaWAN protocol for its low-power, long-distance industrial IoT service, has taken on more of a widespread, Internet-like approach, rather than a more telecom-like angle whereby the company would build out its own networks on a market-by-market basis, Khorram explained.

"IoT is more Internet than telecom," he said.

Via its new business and deployment model, MachineQ says it will be able to scale up much faster that it would using the original wide area network-building approach. MachineQ has already begun to work with customers and partners in several markets outside Comcast's cable footprint, including a smart cities project in Wichita, Kan.

Comcast has not disclosed revenues and other financials for MachineQ, a company that arrived on the scene in 2016 and today has about 100 employees. But MachineQ now has "hundreds of paying customers," Khorram said.

The US today; tomorrow, the world
MachineQ is also setting its sights on the global market and is in the process of building versions of its gateways and other IoT devices and sensors that support LoRa channel maps that will enable its products and software to operate in regions such as Europe, Asia and Latin America.

"Our partners... whether it's system integrators or others [are] global," Khorram said, noting that many of Machineq's customers are experts in verticals with global scope. "The market demands that we have international products. We are addressing that need appropriately."

MachineQ styles itself as technology-agnostic, but LoRaWAN is "our foundation," Khorram said. "We're seeing a tremendous amount of adoption among builders and developers. In many ways, it's an unlicensed technology with the benefits of licensed control and security... But we are looking at everything under the sun to complement what our customers want."