How NB-IoT bombed: An IoT tale of hubris and no-show

"Waiting for NB-IoT" could be a new telecom-themed play in tribute to Samuel Beckett. It would feature a couple of world-weary executives reminiscing about their time in the industry as they await the arrival of NB-IoT. Like Godot in the Beckett original, the eponymous technology would be destined never to show up.

Flung together as hastily as a child's sandcastle, NB-IoT is looking like a soggy old mess and an example of extreme hubris by a sometimes cocksure industry. In a ranking of hyped telecom technologies that eventually bombed, it must be one of the lead contenders for the top spot in the last 25 years. 3G, now being switched off worldwide, is probably the closest rival.

NB-IoT's overly swift development pre-2017 was triggered by the emergence outside the mobile industry of super-efficient technologies for connecting all manner of basic "things," from temperature monitors in factories to smart meters in homes. Using unlicensed spectrum, these rivals, with names like Sigfox and LoRa, initially put the heebie-jeebies up cellular. NB-IoT, its licensed-frequency riposte, would see them off, said Matt Beal, the director of technology strategy for Vodafone, one of NB-IoT's devotees.

"NB-IoT will crush Sigfox and LoRa because it means there will be no need for them," Beal bragged to Light Reading in April 2016, as Vodafone opened a dedicated NB-IoT lab at its UK headquarters. The operator was then forecasting 1.4 billion connections based on so-called "low-power, wide-area network" (LPWAN) technologies, including NB-IoT, by 2020.

Not going to plan
It has not quite worked out as planned. In the June update of its mobility reports, which track telecom technologies, Ericsson reckoned only 100 million connections were based on either NB-IoT or LTE-M, a higher-speed alternative, at the end of 2019. Although it classed 1.5 billion connections as "cellular IoT," most of these used good old-fashioned 2G.

Other data gatherers have disclosed similarly low figures. Omdia, a sister company to Light Reading, believes the number of NB-IoT connections crept past the 100 million mark at some point in the last six months. If that is higher than the amount implied by Ericsson's report, Omdia analysts think nearly all the NB-IoT business is currently in China, aided by a government push. "It's been disappointing, as a whole," says Josh Builta, Omdia's IoT director. "Outside of China, which is almost all the NB-IoT connections to date, numbers have not shown much growth and some operators have ended NB-IoT service altogether." 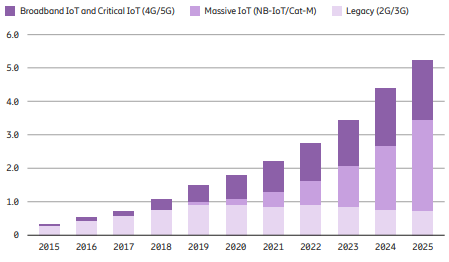 Source: Ericsson. Note: Cat-M is the same as LTE-M.

Japan's NTT DoCoMo is perhaps the most high-profile service provider to have given up waiting for NB-IoT. In March, it revealed it would switch off the service it had launched a year earlier so that it could "concentrate management resources." Dish, the US operator building the country's fourth mobile network, abandoned its own efforts in May, writing off $253 million in the process. "Sales are pitiful compared to the 'billions' forecast and revenues so small that the operators hardly notice," says William Webb, the CEO of Webb Search Limited, a consulting business.

That neatly sums up one of the main problems for NTT DoCoMo and others with cold feet  the cost of maintaining a business that makes a negligible impact on sales. Vodafone, for instance, had 85 million IoT connections in total at the end of March but made only 783 million ($877 million) in IoT revenues for the year, a figure equal to less than 2% of its group sales. Judging by Ericsson and Omdia data, most of these connections were on 2G networks, however. Operators can justify keeping those on life support because they prop up not only the IoT business but also voice and roaming services.

Persuading 2G customers to adopt NB-IoT-based services would bolster the new technology, but too few users are willing to budge. As a more mature technology, 2G still comes with lower module prices, says Christian Kim, a senior IoT analyst at Omdia. "For many potential customers, the time and resources needed to make the switch still cannot be justified," says Builta.

The success of LTE-M has been a further problem for NB-IoT. That technology was originally pitched at a slightly different problem  objects that move around and need a bit more bandwidth than NB-IoT can muster. But it seems to have intruded on NB-IoT's turf. "The unit price of LTE-M modules has come down a lot, to $5-7 per unit, reducing NB-IoT's price advantage," says Kim. Countries including Australia, Japan, South Korea and the US have experience using LTE-M as an alternative to NB-IoT, he notes.

Struggling to fit in
Like an awkward teenager, NB-IoT has been left struggling to fit in. "NB-IoT is a fairly limited technology that cannot support a wide number of use cases," says Builta. Its problems have been compounded by a series of technical issues. After it was first standardized in the summer of 2016, equipment from China's Huawei turned out to be incompatible with gear made by Ericsson, according to several industry executives. Effectively, there were more than two NB-IoT standards in the market.

Even now it is bedeviled by complexity, say critics. "NB-IoT is a zoo in terms of the protocol, which is changing quite often," says a well-placed industry source, requesting anonymity. "People get worried because they develop a device and then the firmware has to be changed."

Webb thinks much broader problems explain the IoT flop. Back in 2010, he points out, both Cisco and Ericsson were anticipating around 50 billion IoT connections by 2020. Ericsson's latest mobility report identified just 10.7 billion in total last year, the vast majority served by short-range systems like Bluetooth, Wi-Fi and Zigbee. The massive undershoot happened largely because of an industry assumption that IoT "would be as easy as selling iPhones," says Webb.

His detailed thoughts on this topic are the subject of a recently published book, The Internet of Things Myth, co-authored with Matt Hatton, another IoT expert. The super-condensed version is that operators have made a series of mistakes in the last ten years. Assuming everything should be connected, paying too much heed to connectivity rather than systems management and failing to come up with a genuinely "open" IoT standard are some of the most egregious.

On the business side, he adds, there has been a lack of focus on transforming business through IoT and too much on simply tweaking existing practices. Also missing from the equation is a "value chain that generates sufficient profit for all the players," says Webb.

For all his apparent gloom, Webb believes IoT will eventually get the tens of billions of connections that were forecast. "We are optimistic  IoT is necessary and there are viable use cases  but we are not optimistic that all of the problems will go away fast." Above all, there is still a lack of progress on the development of a single, common standard, he says. 5G, less a single standard than a club of technologies into which NB-IoT has been admitted, is certainly no panacea, as far as Webb is concerned. 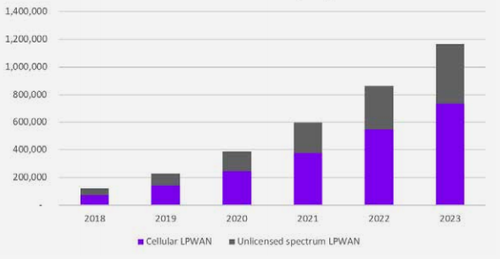 Forecasters remain hopeful that NB-IoT will not be a perennial no-show. Ericsson continues to predict there will be more than 2.5 billion connections based on either NB-IoT or LTE-M by 2025, although it does not provide a breakdown. Omdia, which is currently preparing new forecasts, previously estimated there would be more than 700 million "cellular LPWAN" connections by 2023.

"I would point that while the NB-IoT and LTE-M standards were announced around four years ago, in many areas, like North America, nationwide NB-IoT networks were just achieved last year," says Builta. Plans to sunset 2G networks in this part of the world "could provide the impetus for customers to finally make that change," he adds.

NB-IoT, then, could still provide a somewhat satisfactory conclusion that Vladimir and Estragon, the protagonists of Waiting for Godot, were denied in their story. By then, under the 5G umbrella, it may look very different. And, for many service providers, it seems unlikely to bring either riches or an end to their existential angst. Any version, though, is probably better than a total write-off.

Like what we have to say? Click here to sign up to our daily newsletter
COMMENTS
Newest First | Oldest First | Threaded View
Add Comment
Be the first to post a comment regarding this story.
EDUCATIONAL RESOURCES
sponsor supplied content
eBook: Monetize the Enterprise - 6 Ways to Capture the B2B Opportunity
eBook: The 3 Key Digital Mediation Challenges - And How to Solve Them
Case Study: APAC CSP Boosts Efficiency of Enterprise Operations with CSG
Private 5G Networks and Testing
Which Path to Convergence Is Right for You?
Data Center Top Tips: 10 Issues That Can't Wait
DDoS Trends Report
The Challenge of 5G Security
Building the 5G experience
Grow Your Revenues With Innovative Customer Engagements and Business Models
Educational Resources Archive
More Blogs from Morris Lore
Towerco consolidation would show up huge conflicts of interest