ASML, an obscure Dutch firm, may be the most vital cog in tech

Best known for its canals, liberal attitudes and culture of cycling, the Netherlands also plays host to what might be the most important company in the world that hardly anyone would recognize. Headquartered in the unassuming Dutch town of Veldhoven, ASML makes the equipment needed to produce the most advanced semiconductors on the planet. For economies hooked on technology, its disappearance would be devastating.

Thanks to a technology gamble years ago, ASML is the only company that can sell extreme ultra-violet (EUV) lithography machines to chipmakers such as Samsung and TSMC. Lithography is the process of imprinting electronic circuits on silicon wafers, a sort of complex etch-a-sketch that turns the raw material into a valuable commodity. Like ASML, Japan's Canon and Nikon sell machines based on deep ultra-violet lithography (DUV). But neither has an EUV product.

The distinction is best envisaged as the difference between a big black marker and a fine-tipped pen, according to Lucas van Grinsven, ASML's head of communications. DUV has a wavelength measuring 193 nanometers, or billionths of a meter. With EUV, that shrinks to 13.5 nanometers. Those state-of-the-art chips whose transistors measure just five or seven nanometers are made with EUV equipment, says van Grinsven. 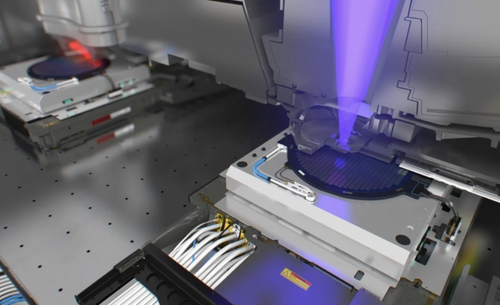 Lithography systems at work on a silicon wafer
(Source: ASML)

ASML's importance to chipmaking giants such as Intel, Samsung and TSMC has fueled a dramatic rise in its share price since late 2018, when the need for EUV was still being questioned. Worth about 137 then, a share now trades for more than 570 in Amsterdam, valuing ASML at more than 230 billion ($260 billion). That is about six times the market capitalization of Ericsson, whose sales last year were about $3.8 billion higher than ASML's.

Demand for ASML equipment has also driven a sharp increase in sales. The Dutch company's revenues were up nearly a third last year, to about 18.6 billion ($21.2 billion), and its net income soared 64%, to 5.9 billion ($6.7 billion). The annual report it published this week shows that ASML sold 309 lithography systems worldwide last year, compared with 258 in 2020. That indicates the expense of lithography equipment. The 2021 numbers equate to revenues of 60 million ($68 million) per lithography system, up from 54 million ($61.5 million) a year earlier.

But ASML's monopoly status in a critical sector also puts it in an awkward position. The Dutch government has denied it an export license for the sale of EUV technology to SMIC, a Chinese foundry. The legal pretext for that was provided by the Wassenaar Arrangement, an attempt by 42 industrialized countries with democratically elected governments to control the export of technologies that have dual civil and military uses. EUV falls under its remit.

The blockade is a massive problem for Huawei, China's kit-making giant. It is already unable to buy chips from TSMC or Samsung, the world's most advanced foundries, because of US trade rules. If ASML could sell to SMIC, Huawei might have an alternative source of high-end semiconductors for its smartphones and basestation equipment. Hurt by various sanctions, it has acknowledged a 30% drop in revenues last year.

The trade war has compelled China to pursue self-sufficiency in semiconductors and pour investment into the sector. But ASML thinks it will struggle to build EUV expertise. Even Nikon, with all its DUV experience, believed EUV was too big and risky an investment, says van Grinsven. "The barrier to entry is very high."

"Early in 2021 we became aware of reports that a company associated with XTAL Inc., against which ASML had obtained a damage award for trade secret misappropriation in 2019 in the USA, was actively marketing products in China that could potentially infringe on ASML's IP rights," it says. ASML has urged customers not to support DongFang JingYuan Electron, the company in question.

But outside China, the current enthusiasm for investing in silicon foundries puts ASML in a very strong position. Just this week, Europe unveiled plans to invest 43 billion ($49 billion) in semiconductor production this decade as it eyes a 20% share of the market by 2030, double its level today. Intel, meanwhile, aims to invest between $25 billion and $28 billion in capital expenditure this year, up from just $14.3 billion in 2020, while TSMC is budgeting for $30 billion.

Some experts have warned the historically cyclical industry is heading for another glut  that today's pandemic-induced shortages will give way to crashing prices and unsold stock. The alternative view is that 5G and other technologies will continue to buoy demand. It's one, unsurprisingly, to which ASML subscribes. And if it can stay relatively unscathed amid the trade wars, at least the next few years are looking good.