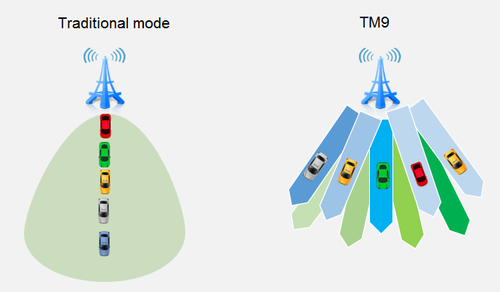 Comment (0)
Mobile networks and smartphones have been developing rapidly over the past few years, and people's lives increasingly rely on mobile internet. Mobile phones are becoming an irreplaceable virtual assistant around the world. The reason behind this phenomenon lies in the ability of mobile phones to quickly transmit data anytime, anywhere. This means that high throughput is at the core of the entire mobile phone experience. TM9, a standardized transmission mode defined by 3GPP, is the core technology for further improving FDD LTE user throughput. This technology can greatly improve the data transmission capabilities of mobile phones by reusing spectrum. The addition of new spectrum resources is not required.

How Does TM9 Significantly Enhance the Data Throughput Without Requiring Additional Spectrum Resources?

LTE user throughput has been significantly improved over the past few years by aggregating several carriers. However, limited spectrum resources must be shared by the UEs. When there are too many UEs, each one is able to obtain only a small portion of those limited resources. As a result, the user perceived throughput decreases in densely populated areas or indoor scenarios. Throughput declines and experience is more likely to deteriorate in hotspot areas or busy hours, just like in rush-hour traffic jams where cars get stuck regardless of how fast or powerful their engines are.

To further improve the data throughput for mobile phones, global leading operators have deployed 4T4R networks on a large scale in 2017 and plan to outmigrate legacy 2T2R networks, which is like moving from a 2-lane highway, to one with four lanes. In this way, the operators expect to enhance the user perceived throughput of mobile phones. However, mobile apps are still in the midst of explosive growth, live streaming and short videos are becoming more and more popular, and virtual reality (VR) is flourishing. All these trends are bound to require the increasingly demanding data throughput on the terminal side and to place huge pressure on network capacity. Therefore, it is necessary to ensure high data throughput for mobile phones as the demand will be increasing many folds. In these circumstances, TM9 is introduced to significantly improve the mobile internet access experience without adding additional spectrum. This technology will enable TM9-capable UEs to report radio channel status to the network, which then forms dedicated narrow beams for target UEs when multiple-antenna technology, such as 32T32R, is deployed on live networks. The narrow beams generated using TM9 are independent of each other. In this way, spectrum can be reused and the overall network capacity can be multiplied. Each mobile phone's exclusive use of an independent beam significantly increases the user perceived throughput and cell capacity. The increasing number of antennas and TM9 combined enable more UEs to have exclusive beams, which greatly improves the data throughput of mobile phones.

Since 3GPP's release of TM9 in 2011, the TM9 industry has matured. Mainstream chipset vendors, such as Qualcomm and HiSilicon, have launched TM9-capable mobile phone chipsets, and more than 20 mobile phone models are powered with such chipsets. TM9 can be activated through one-click operations after software packages are released by phone manufacturers. Currently, the penetration rate of TM9-capable UEs is over 40% in leading markets, and TM9 has been activated for certain high-end smartphones from mainstream brands. Mainstream operators have launched TM9 pilot projects. More than 10 operators, such as China Mobile and Verizon, have completed TM9 field tests, and 2018 will see the deployment of TM9 on up to 30 commercial networks. Once that happens, the internet experience provided by TM9-capable mobile phones is bound to enter a new era.