Web-Scale Networking: Time for Telcos to Get on Board

Telcos have got to be getting a bit tired about hearing how their hyperscale peers are disrupting everything -- with the implication that if the telcos don't adopt hyperscalers' ways, they will perish. It may not be as dramatic as all that, but the truth is, the hyperscalers have come up with a new way of building, deploying and managing their networks, riding a bullet train of efficiency and agility that has taken them miles beyond their slower moving telco peers. The hyperscalers have embraced disaggregation, deploying thousands of white box servers and switches running modern operating systems, open source software, and automation at an unprecedented scale. This combination has allowed them to deploy services more rapidly and more cost effectively. Isn't this exactly the type of innovation that telcos are looking for?

Heavy Reading recently conducted a survey of global telcos on behalf of Cumulus Networks, a leading supplier of Linux network operating system software. The survey found that telcos are indeed looking to achieve many of the same outcomes that the hyperscalers have already attained. Three of their top IT/networking priorities for 2018 were to reduce operational, hardware and software costs. Web-scale networking addresses these aims. Automation helps lower operational costs by reducing the time needed to deploy and manage infrastructure, making it possible to support more devices per admin. White box servers and switches are notably less expensive than proprietary hardware, by virtue of their large volumes and use of merchant silicon. Open source software, while certainly not free, still costs less than proprietary software controlled by a single vendor. Cumulus Networks was one of the pioneers of web-scale networking, and continues to disrupt the traditional networking market with its Linux Network OS. 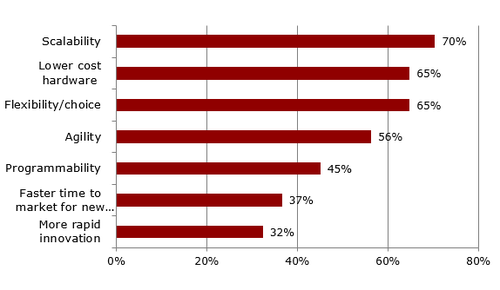 The web-scale approach of disaggregation, open source and automation first disrupted the server market. Companies found that they could get the same capabilities and performance as a vertically integrated solution from a standard x86 server running the open source Linux operating system. The networking domain followed shortly thereafter, with similar levels of disruption. Initial deployments of web-scale networking came in the data center. Changing traffic patterns necessitated a change in architectures, leading to leaf-spine replacing the three-tier model. High-volume white box switches from companies like EdgeCore and Quanta quickly gained traction. Those switches run Linux operating systems -- just like the x86 servers that also reside in the data center. Having the same operating system in multiple domains helps simplify and optimize operations. More recently, Facebook's Voyager project has shown that web-scale networking is well-suited for the optical transport domains as well, with a solution to provide data center interconnect (DCI).

Disruption is never easy, and the one about to occur in the telco networking domain will be no exception. Web-scale networking presents a new paradigm that will take some time to institutionalize. The benefits on the other side, however, are too compelling for telcos to put it off any longer. As much as they may hate hearing about how the hyperscalers have figured it all out, they will love how much more efficient and agile their networks and operations will be once they board the web-scale networking train. Cumulus Networks stands at the ready to help them take that ride.

SPONSORED: A new Heavy Reading survey indicates that CSPs face a variety of hurdles to overcome when deploying MEC platforms.