Google is stepping up its multi-cloud game, launching Anthos, an open platform to run apps anywhere, on-premises or in public clouds. Anthos supports Google's own public cloud of course, as well as well as competitors Amazon Web Service and Microsoft Azure.

Anthos, announced Tuesday, lets enterprises run apps anywhere, on existing-on premises hardware or in the public cloud. It's designed to move existing applications to the cloud, without modifying code. Anthos is based on the Cloud Services Platform Google launched last year.

Anthos, which is a software solution, works on Google Cloud Platform with Google Kubernetes Engine (GKE), as well as managing workloads running on third-party clouds including AWS and Azure, Google said in a blog post Tuesday. Apps can be managed across clouds using common environment and APIs.

Google is partnering with Cisco -- given prominent placement, demonstrating the close relationship the two companies -- as well as VMware, Dell EMC, HPE, Intel and Lenovo on delivering Anthos on their own hyperconverged infrastructures. Google has also lined up systems integrator partners, including NTT Communications, as well as Accenture, Cognizant, Deloitte, Wipro and others.

Surprise? Not really Support for competitors AWS and Microsoft will be surprising to casual observers, but not to anybody who's been paying attention to the cloud market. Google has been espousing a multi-cloud strategy for some time, and true multi-cloud support requires support for AWS and Azure.

Moreover, Google is in third place in the public cloud market, behind second-place Microsoft and AWS, which has as much market share as its next four competitors combined, according to a February statement by Synergy Research. So support for AWS and Azure gives Google a foot in the door with cloud operators embracing a multi-cloud strategy. 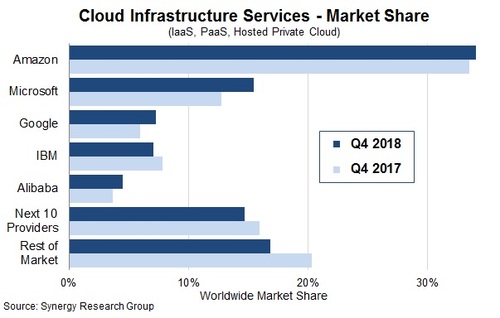 Like the old saying goes: "if you can't beat them, join them."

Like Google, IBM is taking a multi-cloud approach; that strategy is a factor behind IBM's $34 billion Red Hat acquisition., with plans to run Red Hat as an independent business post-closing.

But wait there's more Google launched Anthos at its Google Cloud Next customer and partner conference in San Francisco.

And it debuted partnerships with seven open source companies specializing in data management and analytics.