UK Bumpkins Told Not to Expect Fiber in Their Lifetimes

If you are in your late 60s and live in a part of the UK that is "hard to reach" with fiber, you might get some heavenly harp lessons before high-speed broadband arrives in your neighborhood, judging by current life expectancy and the UK government's latest broadband plan. (See Eurobites: UK Fine-Tunes Its Full-Fiber Future.)

Shocked into action by unfavorable comparison with Europe's fiber leaders, the UK government is determined to make all-fiber networks available to every home and business -- by 2033.

Just soon enough, then, to support the next wave of social media services for teenagers born today. If the robots haven't taken over by then, the only reason may be that UK networks are too slow for artificial intelligence. Perhaps the UK will be in the vanguard of resistance to the Terminator-style machines the human race is battling. If Elon Musk strikes scientific gold, some of us may already be living on Mars.

In all seriousness, the most terrifying thing is not the UK's broadband lag, but just how marathon-esque it may become. If the current regime is allowed to persist, warns the Department for Culture, Media and Sport (DCMS), fiber will only ever reach about 75% of the population, and not before 2038 at the earliest.

Portugal already tops this level, according to the DCMS, with 89% of premises able to enjoy all-fiber services. With coverage at 71% of the population, Spain is not far behind. And while France is nowhere near those figures, with all-fiber networks available to just 28% of people, the percentage is "increasing quickly," says the DCMS. 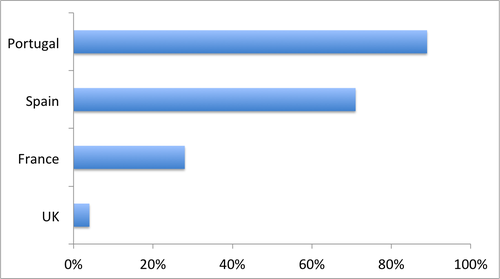 In the UK, meanwhile, just 4% of premises can receive all-fiber services. Broadband success in the pre-fiber era, as the regulator crowbarred open the BT Group plc (NYSE: BT; London: BTA) network, has been matched by fiber failure, and may even have contributed to it. The companies that flourished as "local loop unbundlers," installing their own DSL equipment in BT's exchanges, did not worry about investing in their own fiber networks. For any tempted, the difficulty of accessing BT's ducts and poles -- to lay fiber without digging new "passive" infrastructure -- has quelled interest.

This is supposed to have changed. Ofcom, the national regulatory authority, has recently forced BT to halve rental prices for so-called "duct and pole access" (DPA), says the DCMS. Other changes are supposed to cut deployment times in half. But Vodafone Group plc (NYSE: VOD), which is now collaborating with a fiber specialist called CityFibre, remains unimpressed. (See Vodafone Gets Set for Gigafast Assault on BT.)

Guilhem Poussot, the head of Vodafone's new "gigafast" program, says gaining entry to passive infrastructure owned by Openreach, BT's networks business, is still far more cumbersome than accessing ducts and poles in Portugal. This could potentially hold up Vodafone's rollout of gigabit-speed services with CityFibre. While the two companies are initially targeting communities in which CityFibre already owns passive infrastructure, they may eventually need to rely more heavily on Openreach's ducts and poles, spokespeople acknowledge.

This particular DPA issue is not the only regulatory shortcoming, either. DPA is not mandated in business markets, which means it is unavailable from Openreach for mobile "backhaul" links between basestations and core networks. Nor can mobile operators yet buy from Openreach the "dark fiber" services that would give them more control over connections. Ofcom previously tried to mandate dark fiber but messed up its methodology and was shot down by legal authorities after a BT challenge. This dark fiber gap threatens to put the UK at a disadvantage to other European countries when it comes to 5G rollout, Vodafone has argued. (See Europe's Backhaul Black Hole Looms Above 5G.)

For all the government's grand rhetoric about making it easier for operators to access buildings, and gain the planning permissions for network deployment, these Openreach issues are of paramount importance. The big difference between the UK and the southern European countries it trails is that regulation of the former state-owned national network -- whether by design or accident -- has been less effective in the UK.

The DCMS knows there is a problem. Commenting on Ofcom's practice of treating business markets differently from residential ones, it says: "This distinction between markets may lead to inefficient investment decisions." It also says there is "evidence" of the case for a "viable, cost-effective dark-fiber access remedy on Openreach for mobile backhaul."

Yet everyone outside BT already knew this. The challenge is not figuring out what is wrong but coming up with a solution. The government's solution, it seems, is to wag a finger at Ofcom and hope it listens. "The government encourages Ofcom to consider the merits of this regulatory option," it says on dark fiber. "Ofcom should consider moving to single, unified market reviews," it advises on DPA.

In the meantime, the UK bumbles on. With few real infrastructure rivals and a limp-wristed regulator, BT is in little hurry to build a nationwide gigabit network, especially if it is made to sell wholesale access at regulated rates. What limited pressure there has been from rivals and regulators has extracted a commitment from the incumbent to build an all-fiber network for 3 million premises by 2020. But this would equal just 11% of the total. Fiber-starved, sexagenarian bumpkins would be advised to move abroad.