From the outside, it has not been a pretty year for the Alphabet Access business. The broadband division that encompasses both Google Fiber and Webpass lost another CEO, continued to delay deployments and even backed out of the city of Boston with its wireless service. (See Google Fiber Exits Beantown .)

Yet through it all, the company has remained relentlessly sunny about its prospects. And while it's not spending nearly what it once did to fund fiber build-outs, it appears to be learning from some of its mistakes, and it may even be creating a viable new path forward.

This is significant because Jain comes to the table with actual experience running an Internet service provider business. Previous CEOs Craig Barratt and Greg McCray had run companies that served the telecom industry, but neither had any direct experience leading an ISP before taking the helm at Access. That's not a knock against them by itself, but it may help explain why the company appeared unprepared for what it would find as it tried to enter new broadband markets.

Conversely, Jain was the chief operating officer at Time Warner Cable all the way up to its acquisition by Charter Communications Inc. Before that, he was president and COO of Insight Communications (acquired by TWC) for more than 10 years. So Jain can have no illusions about how difficult the broadband access business is. And in fact, he may bring an entirely different ethos to the Google Silicon Valley environment as someone who hails from East Coast cable country.

New leadership isn't the only thing that's changed at Access. According to policy head John Burchett, the business has shifted strategy in the last year.

"What's changed is we've decided we really need to focus on the markets we're in," said Burchett, speaking at the Incompas Policy Summit. "We need to get our business fundamentals. We need to find better and cheaper and more efficient and less disruptive ways to deploy."

Burchett also noted that the company has figured out where the biggest pitfalls to deployment lie. Asked what was surprising about entering the ISP business, Burchett answered without hesitation that it was make-ready pole attachment policies, i.e. the ability to get Google Fiber's broadband equipment installed on utility poles.

"Total nightmare," commented Burchett. "And in fact at the moment we're focusing almost all of our construction in shallow trenching and other things because the poles have been so difficult to get on... That would be the one that I think really threw us for a loop." 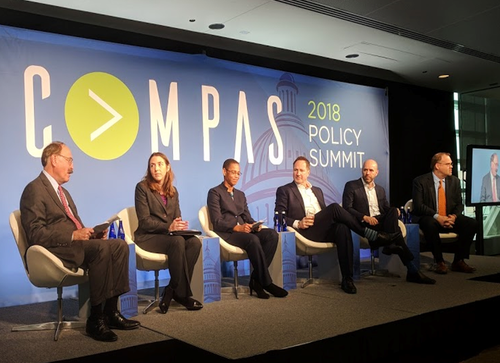 On that pole attachment front, Google Fiber may be getting a break in the near future. The Broadband Deployment Advisory Committee (BDAC) at the Federal Communications Commission (FCC) has voted to recommend a One Touch Make Ready (OTMR) provision that would streamline the process, and there is significant political will in Congress to push forward policies that would speed up broadband build-outs -- particularly ones that don't cost money. (See Good News for Google at the FCC.)

Burchett sits on the BDAC and has been one of the advocates fighting for the new OTMR recommendation. It might have been a surprise to see Google on the committee given the fact that the company has publicly reined in its broadband ambitions. But whatever has gone wrong with the Access division recently, it hasn't stopped the company from lobbying its competitive broadband agenda in Washington.

In addition to supporting regulatory changes in the wireline industry, Google has also pushed for opening up spectrum in the 3.7-to-4.2 GHz band for new wireless services. (See Google Taking 3.5GHz Tests to NASCAR.)

Burchett acknowledges the difficulties the Access group has had, and the ones it still faces.

"I think it probably started with a desire to disrupt an industry that we didn't see much competition, we didn't see much improvement in, and with a little bit of the Silicon Valley hubris [we] sort of thought, 'Oh, we can do it better.' "

The challenges have proven more difficult than the company expected, but in typical Google fashion, Burchett also thinks better days are ahead.

"We've made a lot of internal progress, and we feel like we're doing pretty well and in a pretty good place," Burchett said. He added that "from the outside world it certainly looks like things have stalled. Internally it doesn't feel that way."

The proof, of course, is in the pudding. Access has a new leader and a new roadmap. Now it has to deliver results.

brooks7 2/22/2018 | 12:31:02 PM
Re: Distrupting Disruption A friend of mine who is a Family Law Attorney gave me a really good quote once that I think sums this up.  "Don't confuse your Google Search with my Law Degree."  I think that Google didn't understand the landscape that they stepped into and were taken aback by why things are the way they are.