Verizon's One Fiber initiative in Boston wasn't a one-off endeavor. Now that the telco has similarly teamed up with the city of Sacramento, Verizon has made it clear that it intends to pursue a model of tying fiber rollouts to aggressive small cell deployments and smart city pilot projects.

The advantage? Cities smooth the way for Verizon to install infrastructure that will be critical to future wireless revenues, and the telecom operator gets a chance to promote its Internet-of-Things technologies just as communities start to experiment with new IoT applications. (See Verizon's Boston Smart Cities Pilot Begins.)

To be sure, the cities partnering with Verizon Communications Inc. (NYSE: VZ) get a lot out of these deals too. In Sacramento, Verizon is delivering technology and services valued at more than $100 million. However, that investment is designed as much to help Verizon secure a long-term strategic advantage over competitors as it is to put the tactical pieces in place for near-term development in Sacramento.

There's also a catch, and one that crops up in almost every deal ISPs -- not just Verizon -- make with city governments. Verizon isn't disclosing when and where it will seek to install new fiber strands beyond select traffic intersections and certain key areas where it's agreed to provide free WiFi service to city parks. The telco will be "deploying hundreds of miles of fiber throughout the city," according to master services agreement, but Sacramento has limited control over how the company prioritizes deployment locations.

"At certain times in the negotiations toward the end ... they would ask and we would show them where our fiber path was going to be," says Hubert Riley, who leads government affairs for Verizon's Smart Communities practice. But he adds that the overall deployment plan is "very secretive" and anything Verizon shared with the city has to be kept confidential by city officials as well.

Welcome to the world of public/private broadband partnerships. 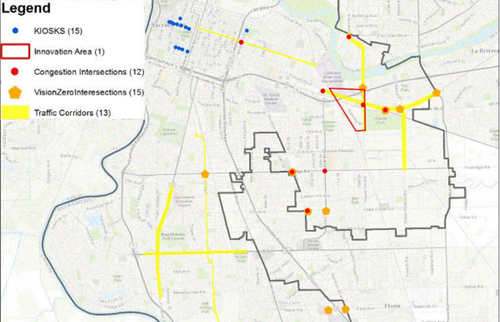 Increasingly, cities and network operators are coming to terms with the fact that each needs something from the other. Cities need better connectivity overall, for which they're willing to exchange the preferred notion that all citizens should have access to equal service. Operators need to a way to cut through regulatory red tape so they can get the necessary equipment installed to sell more high-margin wireless services for which they're willing to exchange some of their own resources to be dedicated to civic improvement and digital inclusion efforts.

In Sacramento, the deal with Verizon came together very quickly. Riley says that when Mayor Darrell Steinberg took office in December, the new chief made clear he wanted to take calculated risks to help the city elevate its profile and attract new businesses. Steinberg visited Verizon's innovation center in San Francisco in January and sat down with Verizon's vice president of Smart Communities, Lani Ingram. Negotiations started virtually immediately with the mayor apparently telling Ingram that the city was interested in a non-exclusive deal that would have Verizon providing new broadband connectivity and helping to solve certain city challenges, and the city agreeing to ease the process of equipment installations with financial and time-saving incentives.

"The idea," says Riley of the company's approach, "was [to ask] how do we become a partner to the city instead of just going in and trying to get the best rate possible?"

Discussions continued for several months, and then Verizon announced the Sacramento partnership on June 1. The city council voted unanimously to approve it five days later.

From a broadband perspective, Verizon secured very specific and significant benefits from Sacramento. These include 20 years of free access to existing city-owned conduit, and a waiver on attachment fees for the first 101 small cells Verizon deploys. For later 5G small cell deployments, the city has also agreed that Verizon will only have to pay attachment fees based on the California Public Utilities Commission standard, which is a lower rate than Sacramento typically charges.

On the process and paperwork side of the equation, Sacramento has promised to streamline permitting for attachments to assets like municipal streetlights. And where fiber is concerned, the city has agreed to speed up approvals for right-of-way access as well.

In return for these benefits, Verizon will deliver free public WiFi in select locations, host a Science Technology Engineering and Math (STEM) outreach program for students and sponsor a number of high school internships.

"We're providing free WiFi to 27 city parks, and a lot of those parks will be in underserved parts of Sacramento," says Riley.

Verizon smart city kiosk pictured above, with an image from partner Frog Design on the left, and one of the kiosk in real life on the right

Verizon will also collaborate with Sacramento on several smart city initiatives. It will deploy intelligent traffic capabilities at a dozen or so intersections, install 15 digital kiosks around the city and offer the local government free access to the Verizon ThingSpace IoT platform. Much of what Verizon is developing in the smart city space is still experimental, so any insights it gleans through its work with Sacramento will only serve to improve the company's strategy for smart city rollouts in other communities.

And yes, there will be additional communities.

Asked if Verizon plans to take its public/private partnership model beyond Boston and Sacramento, Riley says that although the details may look different, and the approach won't work everywhere, the telco has every intention of pursuing similar deals elsewhere.

darkducobu 7/29/2018 | 11:52:06 AM
Re: Maybe Apples & Oranges Are the non-competition clauses similar with France or other European Union countries?
Reply | Post Message | MESSAGES LIST | START A BOARD

Joe Stanganelli 6/27/2017 | 11:29:26 AM
Re: Maybe Apples & Oranges @non_bosco: Well, from what I have observed, non-compete clauses, historically, have been notoriously problematic and difficult to enforce -- particularly in California.

(DISCLAIMER: Neither legal advice nor the affirmation, recognition, initiation, solicitation, or acceptance of an attorney-client relationship. For actual legal advice, personally consult with an attorney licensed to practice in your jurisdiction.)
Reply | Post Message | MESSAGES LIST | START A BOARD

I've been writing about it for 20 years and still ask myself that question.

These companies all but own state legislatures, and have ensured that regional regulators are utterly toothless when it comes time to hold them accountable. And these days, the feds are pretty eager to nibble on their earlobes as well as we see by the steady erosion of net neutrality and privacy protections. Bottom line: nobody cares -- as long as there's money being bandied about for campaign contributions.
Reply | Post Message | MESSAGES LIST | START A BOARD

Should have gotten some provision to provide residential fiber out of 'em!

Intead they got bupkis!

How can this company using this strategy over and over without any problem ?
Reply | Post Message | MESSAGES LIST | START A BOARD

KBode 6/23/2017 | 8:34:57 AM
Be careful, cities... If you're a city and you're not looking back over all of the complaints about Verizon taking taxpayer-funded subsidies and tax cuts but not finishing its deployments (PA, NY, NJ, MA), you've got yourself to blame when, in five years, these new citywide deployment promises wind up being equally hollow.
Reply | Post Message | MESSAGES LIST | START A BOARD