Is the US Ready to Close the Fiber Gap?

US cable and telecom companies have been insistent about driving fiber deeper into their networks, but how much fiber investment is realistic, and how much is wishful thinking?

According to an estimate by Deloitte, the US will need to invest between $130 billion and $150 billion in fiber deployments over the next five to seven years. To put that in context, AT&T Inc. (NYSE: T)'s capex budget is roughly $22 billion for 2017, but that covers spending for all types of infrastructure and other initiatives, not just fiber connectivity. AT&T lists software-defined networking, security, smart city initiatives, IoT and wireless among its investment targets, making actual fiber deployment just a fraction of its overall spending plans. (See AT&T Boasts 2-Year, $40B+ Spend .)

And AT&T has the biggest capex budget by far of any of its domestic peers.

As another data point, Verizon Communications Inc. (NYSE: VZ) has signed an agreement with Corning Inc. (NYSE: GLW) to spend at least $1 billion for fiber optic material by 2020; not an insignificant amount, but a drop in the bucket compared to the more than $100 billion total that Deloitte cites in its report. (See Corning Lands $1B Deal With Verizon.)

Since it's hard to get a sense of what the big telcos are actually spending on fiber deployments -- including both materials and labor -- perhaps the best number to look at is the all-in budget for fiber expansion in a single city. One of Verizon's most significant consumer broadband commitments in recent years has been its agreement to connect areas in Boston through a One Fiber initiative beginning in 2016. The cost? Three hundred million (that's million, not billion) dollars over six years. 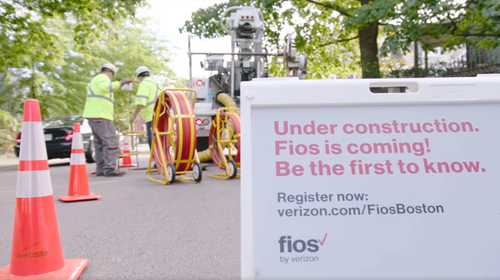 Deloitte argues that the current industry environment doesn't provide enough incentives for fiber deployment, but it's difficult to make a precise evaluation because operators don't reveal many of the details behind their investments. It's also true that, whatever the target investment number should be, wireline spending is picking up.

In addition to telco initiatives, cable companies are also investing in deeper fiber networks. Comcast Corp. (Nasdaq: CMCSA, CMCSK), for example, has adopted a "hyperbuild" approach of adding metro fiber to a region and then building outward for both commercial and residential services. And Altice has committed to deploying fiber to the home across nearly its entire US footprint by 2022. (See Altice Plans FTTH for Entire US Footprint.)

Fiber provider Corning has also said that it's forecasting an increase in sales in its optical business to $5 billion by 2020, up from $3 billion in 2016, a fact cited in a recent Jefferies & Company Inc. report. Some of that will come through merger and acquisition activity, but the company expects some of it to come through natural market growth.

Perhaps the most important factor to consider in future fiber investments is how the business models for deployment are shifting. As Kagan analyst Jeff Heynen points out, there are now multiple new strategies for monetizing fiber networks, including cloud-based services, higher-quality video offerings and the promise of 5G wireless applications.

Heavy Reading analyst Dan Grossman also notes that many of these new services can be delivered by the same fiber deployments. As Grossman puts it, operators recognize the inefficiency of siloed infrastructure and are now looking toward converged fiber access platforms that should significantly improve their return on investment. In his report, Grossman even goes so far as to say that "fiber is sexy again," citing data that shows fiber construction is up across commercial, municipal and upstart service providers. (See Converging the Access Network.)

Whether the US can hit Deloitte's numbers for fiber investment remains to be seen, but certainly fiber is looking like a better financial bet than it has in many years. There's no doubt that more fiber deployments are on the way.

Rankings in the International broadband penetration and speed race is a public policy issue that's pretty far removed from actual investment decisions. The US is not precisely chasing prestige for the quality of our infrastructure. South Korea, Hong Kong, Japan and Singapore made it national policy to get to the top of the rankings, and subsidized the incumbents heavily to get there.

Rural communities have a quantifiable cost for lack of broadband Internet access. That's why so many of them are taking their fate into their own hands.

Tier-1s and Tier-2s care little about social costs. They're ramping up because they've revisited the business case for doing so, and this time the numbers add up. Plus a few other business reasons.
Reply | Post Message | MESSAGES LIST | START A BOARD

Things are changing. US homes passed with FTTH by 2019 will increase from 32.5M to at least 55M, based on Hal Singer's tally of public announcements. Even AT&T is on track for 17M HHP - at some point in the near future, Gigapower is going to surpass FiOS in homes marketed.

Thanks.  I think you have conflated many ideas here and I am not sure that they end up at the conclusions that are being drawn.

1 - Cable is in the process of deploying DOCSIS 3.1 for Residential Use.  That basically eclipses in speed pretty much anything that copper networks are going to do.  I recognize that theoretically G.fast gets there (possibly), but until I see AT&T saying they are replacing U-verse (VDSL2 based) with G.fast, then we are talking about a niche product.

2 - US Telcos have given up the race in Wireline Residential Broaband with 2 exceptions:  FiOS and Rural Telcos.  In fact, they gave up this chase over 10 years ago.  Nobody wants to recognize this because we want the FTTH installs to grow.  And yet, outside the rural telcos the deployment of FTTH has been trivial - including Google Fiber.  FiOS was completed in its scale about a decade ago and connected millions of homes.  Does the rest of the US even equal the extent of the FiOS deployment yet (and yes I know many of those homes are now part of Frontier)?

3 - 5G is an issue but not for the Fixed Wireless versions.  That will probably deploy more like WISPS and will create their own problems with Tower/Antenna Placement.  Read the posts earlier this year about Pole Attachment.  Now go talk to people about Tower Construction and you will see that Pole Attachment seems solvable by comparison (just wait till you have to file an Environmental Impact Statement).  That means Tower growth is going to be very slow.  I have run into startups that want to put 5G electronics in every street light.  I can't imagine Cities doing that nor can I imagine how that will end up being shared, but hey somebody is at least thinking.

4 - Despite this notion of a combined Access, it frankly makes no sense - except for the incumbent.  Why does it make sense for a combined Access for AT&T in New York or Denver?  If they are leasing transport, then that will have almost nothing to do with Residential Broadband.

So, do I think there will be an ongoing growth of fiber networks and it will continue at a fast pace?  Yes, I do.  But there are lots of downtown areas in major metros (NY, LA, SF, etc.) that have significant amounts of fiber construction to do for Business Services.  This notion of a ubiquitous fiber Residential Network is flawed.  Cable is at least 10 years away from needing to do it (if you can do Gbps over DOCSIS then why do FTTH).  Telcos are focused on wireless for residential (why sell a house 1 phone when you can sell it 4).  The idea was that video packages will justify FTTH.  If we cord cut, than this is gone and the current deployments support what we have.

msilbey 9/6/2017 | 9:43:57 AM
Re: Status Quo Dangers Alison- I'm hearing more from city governments doing analysis now of the fiber and conduit assets they have, and what they think they're going to need. I wouldn't say the trend is prevalent, but the more sophisticated folks recognize that this analysis has to happen.

msilbey 9/6/2017 | 9:43:32 AM
Re: Bullish on fiber Gap between what exists now and what fiber will have to be deployed to support future applications and services, including 5G.
Reply | Post Message | MESSAGES LIST | START A BOARD

alison diana 9/6/2017 | 9:37:50 AM
Status Quo Dangers What is the cost of NOT investing in fiber -- especially as other countries have national plans (both taxpayer-funded and customer-funded)?

One problem, which Mari mentioned: Nobody has any really clear idea of the amout of lit and dark fiber snaked around the country since operators (understandably) view this as competitive and confidential data and municipalties often do not have any good records, given the different administrators who've come and gone over the course of fiber deployments. It's then even tougher to tell where and how much fiber exists, making estimates that much more complicated to generate.
Reply | Post Message | MESSAGES LIST | START A BOARD

Duh! 9/5/2017 | 12:39:45 PM
Bullish on fiber As I discuss in my Heavy Reading report, US providers have a lot of drivers and enablers for going all-out on fiber construction over the next few years. That includes Tier-2s (at least the healthy ones), Tier-3s, munis, coops, and upstarts. Adding up all the factors speaks to a fiber construction boom over the next 3-5 years. That, of course, assumes favorable business conditions and smart Federal and State regulation.

The big take-away that I got from the Deloitte report was that opex dominates carriers' cash flow, leaving relatively little for capex and dividends.  Most of that opex goes to maintaining copper plant, legacy equipment and manual processes in support of declining businesses -- a vicious cycle. Technology transition will free up increasing amounts of that cash for further capital investments in fiber, white boxes and automation -- a virtuous cycle.

I'm continuing to dig into all of this.