Think of high-speed German infrastructure and one is likely to imagine the country's autobahns, where cars can still be driven (legally) as fast as they will go -- not its broadband networks.

While former state-owned telcos in France and Spain are building super-fast fiber networks to customers' doorsteps, Deutsche Telekom is still polishing its much slower copper lines. If gigabit-speed services become economically important in the next few years, Germany could find itself in Europe's slow lane. (See Germany's Gigabit Lag and Orange Sticks to High-Fiber Diet.)

Pressure is mounting on Deutsche Telekom AG (NYSE: DT) to embrace fiber. In the latest competitive development, rival operator Vodafone Germany has bragged that its 500Mbit/s cable service is now available to about 2.5 million households, more than 6% of the country total, across 100 German cities. It is now focused on expanding service availability in the capital city of Berlin. (See Eurobites: Google's Q2 Gouged by EU Mega-Fine.)

High-speed competition from cable rivals is a worry for Deutsche Telekom, which has continued to lose broadband market share to these players. It was this trend that in 2012 persuaded the incumbent to start investing in a technology called vectoring, which boosts broadband speeds by cutting out the interference between copper lines. Even with vectoring, though, Deutsche Telekom cannot deliver more than 100 Mbit/s over its ageing last-mile networks. 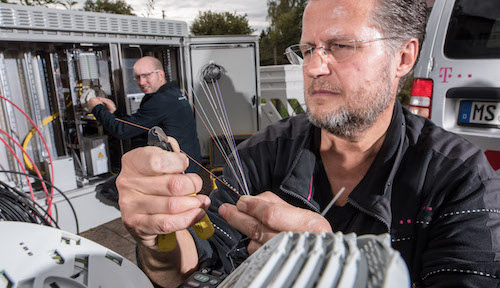 Technicians work on the expansion of Deutsche Telekom's fixed-line network.

The operator's most recent step is to commit funds to super vectoring, an even higher-speed copper-based technology that extends the frequency range over which signals travel. Deutsche Telekom plans to launch a super-vectoring service in mid-2018, it told analysts in May when announcing results for the first three months of this year. But super vectoring also looks relatively pedestrian next to Vodafone's latest offering, topping out at about 250 Mbit/s.

Timotheus Höttges, Deutsche Telekom's chief executive, has repeatedly insisted that a major rollout of fiber-to-the-home (FTTH) networks could not be justified commercially. Following substantial investments in previous years, the company is to spend 1.5 billion ($1.8 billion) in 2017 on expanding its fiber-to-the-curb networks. That equates to as much as 15% of annual revenues from German fixed-line services. Yet despite all of its investments so far, more than 12 million German homes still cannot get any kind of fiber-based service from Deutsche Telekom, and more than one half of households cannot receive more than 50 Mbit/s. Connecting every premise in Germany to fiber would cost between 60 billion ($70 billion) and 80 billion ($93 billion), Deutsche Telekom has previously indicated. And the availability of higher-speed networks has not led to an uptick in service revenues in other parts of the world.

In Germany, regulation is also a persistent bugbear. Because it is deemed to be a dominant player, Deutsche Telekom has been required -- like Europe's other fixed-line incumbents -- to provide wholesale services to rivals on terms acceptable to authorities. The difficulty of agreeing on what was acceptable to both Deutsche Telekom and the regulator previously appeared to hold up the deployment of vectoring. Given the economics involved, finding common ground on FTTH would be even harder. "We do not want to build a network for United Internet," said Höttges last year, referring to a company that has relied on wholesale arrangements with Deutsche Telekom to provide broadband services. (See DT's $1.1B Vectoring Plans Thrown Into Doubt After New Ruling.)

Next page: The fiber squeeze

You will find that DT started deploying a variant of FTTC back right after reunification.  They ended up having to turn it off and overbuilding the fiber they put in with copper to support DSL.  Telcos have memories like elephants and I suspect they are still nervous about deep fiber.