BERLIN -- Broadband World Forum 2017 -- The network operator community might all agree that the ultimate end goal for fixed broadband networks is fiber all the way to the home or business but there's still a lot of capex being pumped into squeezing the most out of copper and coax cables.

That much is evident at this year's BBWF show in Berlin, where, despite still being something of a niche technology, Gfast is still a hot topic as it finds its way into more and more major networks.

UK incumbent BT has long been a fan and, following months of pilots and live trials, is about to unveil its commercial residential broadband service offering based on the copper-line boosting technology, the head of the operator's Technology, Service and Operations (TSO) unit, Howard Watson, told Light Reading. Gfast is a major component of BT's short and mid-term plans, as it plans to use the technology to deliver broadband speeds of way beyond 100 Mbit/s to up to 10 million homes in the UK. (See Eurobites: BT Broadens Gfast Rollout.) 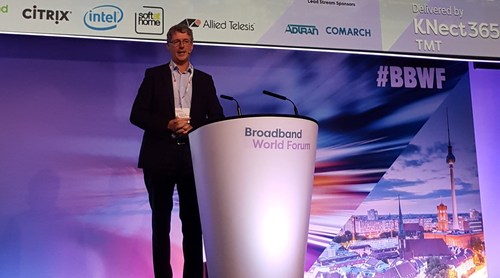 But while BT has been one of the main flag-wavers for Gfast it is by no means alone. AT&T is just one of a number of major operators in the US using Gfast to supplement its FTTH plans, particularly for the delivery of high-speed broadband services over coax in multi-dwelling units (MDUs). And AT&T is very keen to push broadband vendors to deliver even faster speeds using advanced Gfast capabilities as it seeks to gain a competitive edge over the US's major cable operators. (See this story from our sister site UBB2020 -- AT&T Whips the Gfast Horse, Demanding Faster.)

On the other side of the world, Australia's NBN has just announced plans to launch broadband services in 2018 using Gfast capabilities: See Australia's NBN Plots Gfast Launch in 2018, Blames RSPs for Network Issues for the full story and check out the discussion about NBN's plans in this video:

In addition, Deutsche Telekom AG (NYSE: DT) has been here talking about how Gfast is part of its Access 4.0 strategy to develop a broadly applicable next-generation, disaggregated fixed access POD (point of delivery) that it can roll out as it revamps its central offices. (See DT Preps CORD Effort to Slash FTTB/H Costs.)

For more on what's been going on in Berlin, see the following reports from Light Reading, UBB2020 and another of our sister sites, Telecoms.com: