What Is Synamedia's Exit Plan?

Synamedia, the startup formed in late 2018 via the acquisition of Cisco Systems's video software unit, is focused on reestablishing and stabilizing relationships with its largest customers in the near-term. But it's already thinking about what the company might look like three to five years down the road.

"The right perspective is going public," Abe Peled, Synamedia 's chairman, said in a sit-down with Light Reading last week at CES in Las Vegas, when asked what sort of exit plan he had in mind for the company.

Of course, no path forward is set in stone, and will be directed in part by the state and health of the markets. But Peled realizes that Permira , the private equity firm backing Synamedia, will eventually be looking for its payback on the venture.

But now that the keys are back in Synamedia's hands, the priority is to reconnect with the company's customers and "deliver on critical projects in-flight," Peled said. Some of Synamedia's major customers include AT&T Inc. (NYSE: T), Vodafone, Comcast Corp. (Nasdaq: CMCSA, CMCSK) and Comcast's recent acquisition, Sky, the UK-based media company and service provider that just made an investment in Synamedia. (See Eurobites: Sky Takes a Stake in Synamedia.)

That is being followed by a "hybrid" strategy in which Synamedia intends to enable its installed base of major pay-TV operators to convert their systems into multi-screen platforms that deliver traditional TV services along with OTT-sourced content on a unified device and platform.

"That's the basis of our growth strategy... and what we believe pay-TV operators need to evolve into," Peled said.

He is not overly concerned with a narrative building that some cable operators are starting to entertain the idea of letting their higher-cost video business languish and instead focus on their higher-margin and growth-oriented broadband businesses. He said that notion is more popular among smaller operators rather than the major ones Synamedia works with that continue to invest in their own video products. "That's why we're not focusing on tier-2 guys," he said. (See New Household Formation Vital to Cable's Broadband Growth Story in US and Cable One Gets Credit for Putting Pipes Ahead of Programming.)

The other priority is to embark into fresh product areas for the company, including targeted advertising and a new service that London-based Synamedia has developed that enables its partners to zero in on a growing credential-sharing issue and, perhaps, turn that into a new, premium-level revenue stream. (See Synamedia Turns 'Casual' Password Sharing Into Revenue Stream and Synamedia CEO Seeks New Video Service Tangents .) 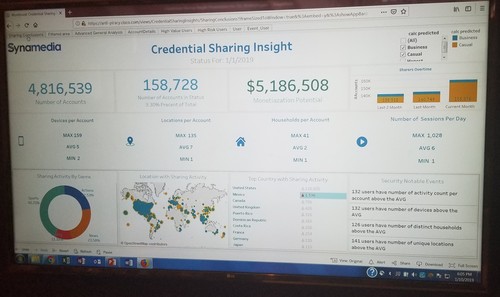 Synamedia is testing a new product aimed at helping the company's partners get a grip on credential sharing issue, and is piloting it for free as it assesses the size and scope of the issue and establishes the value and business model for the product that will eventually hit the market. Pictured is a dashboard of the product that Synamedia demonstrated at CES.

Synamedia is piloting the credential-sharing product for free with a small set of customers as the company attempts to understand the value of the product before establishing the business model.

That approach extends well beyond core elements like conditional access and digital rights management. "We've been strong about revenue protection, but the game has moved on," Peled said, adding that the service can also be used to disrupt a larger and more troubling piracy ecosystem. (See Netflix-Backed ACE Sinks Another Video Piracy Threat .)

brooks7 1/15/2019 | 3:01:13 PM
Re: Arris STB business PE would only be interested if this was an asset acquisition and a large number of the employees were left behind.  It does seem like the kind of business (milking cash flow out of a long tail) that Platnum Equity would do.

James_B_Crawshaw 1/15/2019 | 2:35:11 PM
Re: Arris STB business I doubt PE would be interested in that. Have you looked at Tecnicolor's share price recently? Humax or another Asian manufacturer is a more likely acquirer I think.
Reply | Post Message | MESSAGES LIST | START A BOARD

Jeff Baumgartner 1/15/2019 | 12:39:37 PM
Re: Private equity has to have an exit Good points. Going the IPO route does seem the least likely exit given the history you point to, plus the market conditions. At the same time, interested observers are wondering what might happen if CommScope does try to sell Arris's video set-top box biz...If they go that route, PE seems the mostly likely suitor. Perhaps some PE would look to acquire both software and hardware and take a ambitious run at the struggling video biz? JB
Reply | Post Message | MESSAGES LIST | START A BOARD