After the US government this week approved the AT&T and Time-Warner merger, it's a good time to look at why AT&T is pursuing this merger and the broader landscape of where the two largest North American operators are going -- and what it means for their financial position.

The AT&T and Time-Warner combination will cap a long rivalry between AT&T and Verizon to add scale and diversify media assets. Context is important. One thing driving mega-mergers is the need to change the telecommunications operating model. As we'll demonstrate, the communications business has become expensive and less productive, so these giants are looking to diversify into vertically integrated media-and-distribution companies in an attempt to compete with content companies. And it's all been fueled by enormous amounts of debt.

There is nothing wrong with large amounts of debt if you methodically expand a business, add important investments, or even leverage your existing business so that you improve cash flow and increase shareholder returns. But for AT&T and Verizon, which have added more than $100 billion in debt collectively, it's hard to see where it's gotten them. In fact, their collective expansion vision seems to have done the opposite -- added heft and confusion to their business, while showing very little return to shareholders.

Will AT&T's merger with Time Warner solve that? It's hard to tell yet. But the history of larger mergers on this scale is not good (Time-Warner and AOL, anybody), and I believe it's more of a sign of desperation than anything.

Let's walk through the history of this debt binge and what it's yielded.

Debt deluge
First, let's look at the amount that's been borrowed. Keep in mind the communications business has always been debt-intensive. You need to borrow billions of dollars for capital spending to invest in the plant and technology. The service provider model has traditionally been a utility model, whereby you invest in a plant to deliver services, then increase the monthly revenue with the addition of subscribers, then pay off the interest and investors at the same time.

But over the last decade, the borrowing process has accelerated. Each of these two North American giants had many agendas for the massive capital raises, including acquisitions, capital investment and spectrum license acquisition. But it's not exactly easy to understand the strategy or how it's going to pay off end. That much is shown by simple numbers, such as cash generated by operations and share prices.

As the charts below show -- they've each increased their leverage while operating cash flows have remained fat. 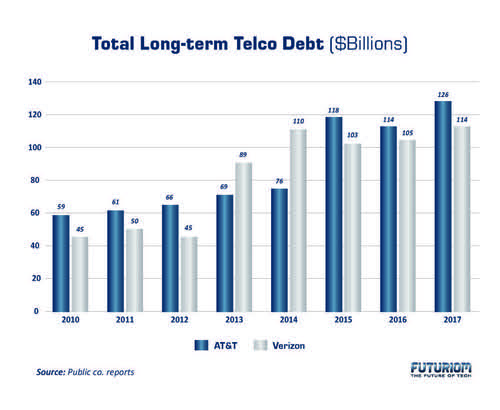 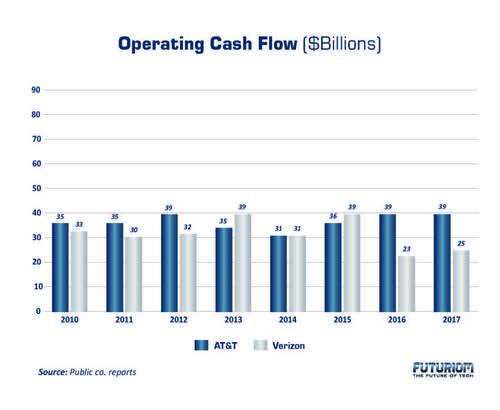 In theory, a debt binge should yield some sort of return -- better cash flow or strategic position. It's hard to see this result.

Messy strategic roadmap
Why have AT&T and Verizon borrowed so much? They have a long list of things they need to acquire and spend on. This includes capital investment, strategic acquisitions, spectrum licenses and other assets.

Most of the money has gone toward acquisitions -- some of them very large. A look over the history of the spending and acquisition paints a somewhat messy picture of what's going on. Let's take a look at some of the major moves that have run up the tab and produced questionable results.

What's next?
Will all of these assets pay for themselves?

I don't see it happening. The telcos are trying to diversify into content when they should instead be focused on their core business -- building networks and charging for value-added technology. It's clear they see content as part of the value-add but customers so far don't seem to be reacting that way. It's clear they are allergic to paying higher prices for bundled content.

How do we know?

The proof is in the numbers: Netflix revenues and its share price are rising fast because of the allure of high-quality unbundled content. Meanwhile, since AT&T bought DirecTV, it has lost more than 1 million pay-TV customers! In other words, the business for which it paid nearly $50 billion appears to be eroding.

Meanwhile, Verizon also appears to be in the business of sweating old content assets. AOL owns a slew of dying brands, and Yahoo's web pages look like they come from 1998. Verizon appears to focused on squeezing more advertising dollars out of these assets rather than investing in them.

Next, you can throw in the fact that the network operators, or NetContent operators, are among the most hated customer service operations in the world. Temkin Associates in 2017 found that AT&T and Verizon were respectively ranked #314 and #316 out of 331 companies for customer satisfaction, according to the feedback of 10,000 consumers. TV service providers and internet service providers regularly rank dead last in a survey of customer satisfaction in 20 industry groups, according to Temkin.

This may be why both companies share prices have been falling. Investors may be realizing that a dangerous diversification strategy built on $100 billion in debt -- while interest rates are rising and their customers are filled with remorse -- may not be the best idea.

brooks7 6/19/2018 | 4:47:44 PM
Re: Is Comcast in the same boat?
I just to point out 2 errors in what you are saying:
1 - Most of the purchases are actually for network assets.  You can argue that they overpaid for them or whatever. Outside of DirectTV, AOL, and Yahoo are network assets, mostly wireless.
2 - Netflix is becoming a content owner.  Just like Comcast.  Now just like AT&T.  Content and Applications (for the latter see Microsoft, Amazon and Google) are much more profitable when done well.  When done poorly, Content and Applications crater like John Carter on Mars.
Finally, I agree with your assertion and that the telcos need to stick to their knitting.  This would be best done by shutting down most of the NFV/SDN stuf and most of the HQ staff as well.  Build networks and put more money into making them better.  Wireless and Fiber to the Business is where it is at.  Let the rest rot in the ground.  Stop trying to turn a pure commodity into something more exotic.  Stop trying to invent network services that nobody will buy (My favorite is when they trot out Time-of-Day networks, which have been around for decades).
seven
Reply | Post Message | MESSAGES LIST | START A BOARD

And no, it does not seem very different.

The history of a bunch of suits in NY trying to manage mega-empires is not good.

It's something the WSJ has now picked up on:

History shows us that these marriages/mergers don't work out and yet.... here we are again.

Is there anything that COULD be different this time around? AOL/Time Warner was in a different eon altogether, before real broadband of any kind was available (and when 'OTT' referred mostly to reactions to an Eddie Murphy joke) so the comparison is a little tough, but I still can't figure what AT&T is going to do with Time Warner unless it has a medium-term strategy to become a media/content company and outsource its network business -- the much talked-about netco/servco split.