Turning from the antennas and cables of its telco business to the world of credit cards and savings accounts, Orange has set its sights on becoming a major European bank. After introducing its inaugural banking service to France about a year ago, the French telecom incumbent is poised for bank raids in Romania and Spain in 2019. In total, seven countries in Europe will feature an Orange Bank service by 2023, under plans revealed late Friday. The operator has set itself a target of having some 4 million Orange Bank customers across Europe within six years, by which time the operator plans to be generating 500 million ($567 million) in net banking income (NBI).

While Orange (NYSE: FTE) is not the only telco with a bank job in its plans, it is probably the most ambitious. Triggered by its 2016 acquisition of a 65% stake in a small European bank called Groupama, its move into finance forms part of a diversification strategy under which Orange aims to generate about 13% of its revenues from non-telecom services by 2022, up from 9% today. With little room for expansion in the telecom market, where it is already one of the world's biggest players, Orange sees banking as one of its most promising growth opportunities and the company already has invaluable mobile finance services experience from its operations in Africa. (See Eurobites: Orange Bank Is Open for Business, Orange May Become Bank With Groupama Takeover and Orange Money Is 10 Years Old.)

The rationale is certainly convincing. As France's biggest telco, Orange already has a relationship with more than 25 million consumers, and one of the country's most recognized brands. Surveyed around the time of the Groupama takeover, around a third of its customers expressed interest in an Orange Bank service, the operator then claimed. By relying on the Groupama assets, its own retail and network footprint and its existing employees, Orange should be able to keep a lid on the investments needed to set up a new financial business. The banking service would allow Orange to boost customer spending and attract new subscribers, it reasoned. (See Orange Claims Customer Interest in Bank Move.) 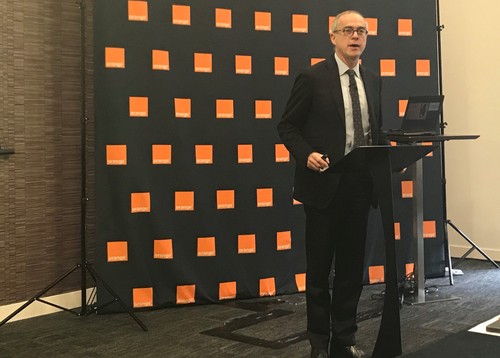 Other than the convenience of buying more household services from a single provider, what can Orange offer that a traditional bank cannot? The telco's broad strategy is not to develop entirely new banking products but to improve what is already there. Technology is a critical part of this makeover. Orange's mobile app scored higher than any rival service during a recent third-party survey, according to executives. A misplaced credit card can be cancelled with a touch, says Ramon Fernandez, Orange's chief financial officer, and reactivated just as easily if found. Bank customers normally wait 48 hours to see the details of a transaction: With Orange's app, those show up instantly.

Technology should also support a low-cost business model for Orange. A digital assistant powered by Watson, the IBM Corp. (NYSE: IBM) artificial intelligence system, today answers around half of all customer queries. That cuts down on the need for human assistants and in-store support. Indeed, while Orange is using physical stores and staff to lure and sign up customers, it expects any subsequent relationship with its banking clients to be largely digital. (See Robot Wars: Telecom's Looming AI Tussle, Hold-Up at Orange Bank: Launch Hits Buffers and Orange Plans Bank Raid With AI, Digital Weapons.)

Execution is of paramount importance. The French retail banking market is already extremely competitive, and traditional banks have been launching their own mobile and online services. Nor does Orange have any kind of monopoly on AI: Crédit Mutuel, a French bank with more than 7 million customers, is also using IBM Watson for customer support. The risk in Orange's case is that a heavy reliance on AI becomes a drawback as more complex services are introduced. Even when it adds a mortgage offer in 2020 or 2021, Orange plans to continue providing support mainly through digital channels, says Paul de Leusse, the deputy CEO of mobile finance services. But Orange would never enter a new banking market unless every issue has been resolved and the service is deemed "100% bulletproof," he explains. (See Altice Puts Squeeze on Orange With Bank Move  Report.)

Next page: Hold up