Equinix is setting its sights on big game with a $1 billion-plus joint venture to operate data centers in Europe for the likes of Amazon, Microsoft and other hypercloud players.

It's a small customer pool -- just a dozen companies, says Equinix -- but potentially big bucks for the data center and colocation provider, whose main business is providing interconnectivity for service providers, enterprises, and, yes, cloud providers.

Equinix and GIC, Singapore's sovereign wealth fund, launched a joint venture in late June for more than $1 billion, to develop and operate xScale data centers in Europe, the two companies said in a news release this week.

The opportunity is big. Amazon Web Services alone operates in 21 geographic regions worldwide, while Microsoft Azure boasts availability in 140 countries. Google said in February it spent $25.46 billion in capex in 2018, mostly on data centers and offices.

"Hyperscalers have growing requirements for capacity, deploying compute and storage around the world," Schwartz says. "Historically, that hasn't been a category of service Equinix offered." Equinix has had "deep relationships" with hyperscalers, but is focused on interconnections and smaller deployments; the new joint venture is looking to change that, Schwartz says.

"It positions Equinix to be responsive to requirements from hyperscalers in a way we haven't in the past," Schwartz says.

Until now, hyperscale vendors have been building data centers for themselves in home markets, and relied on third-party operators and developers overseas. "We think we can build on the relationships we have with them already," Schwartz says. The 12 companies combined now contribute more than $500 million per year to the company's overall $5.2 billion revenue, not counting the xScale business.

Equinix faces competition for its new xScale business. In addition to the hyperscale companies building their own data centers, Digital Realty, CyrusOne, NTT and local providers also serve that business.

The xScale data center locations are within 500 meters of existing Equinix International Business Exchange (IBX) data centers, to leverage the existing interconnectivity business with the new venture, Equinix says. Locations are London and Paris -- where Equinix will sell existing data centers to the joint venture -- as well as Amsterdam, two sites in Frankfurt, and an additional London facility, for a total of six sites with 155 megawatts of power capacity. 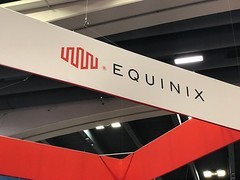 Equinix is dedicating 15 full-time staff, which it calls the Hyperscale Infrastructure Team (or, redundantly, the HIT Team) to developing and executing the facilities and the xScale projects as a whole, working in conjunction with Equinix's overall staff, Schwartz says. In addition to launching the six sites, the HIT Team is executing sales, engineering support, customer engagement and looking to expand to locations worldwide.

Equinix chose to do the deal as a joint venture, rather than maintaining sole control, for financial reasons, Schwartz says. Equinix is already spending $2 billion on capex outside of xScale, and anticipates that the xScale project could deploy at least $5 billion in capital over several years, up to $1 billion annually. "We're concerned about the capacity of our balance sheet to support that. And we think if it goes well we could go even beyond $5 billion," Schwartz says. "So we wanted to have a structure in place to source that capital that wouldn't be constrained by the Equinix balance sheet." Additionally, Equinix believes it can get better debt terms as a joint venture, and that investors will find it more appealing to keep the projects separate.

The xScale data centers are different from Equinix's traditional business in that each data center is designed for a few customers, not a hundred or more, with reduced shared resources and reduced need for physical security between racks, Schwartz says.

Equinix started in Europe because that's where it has existing business with hypercloud providers, allowing Equinix to go to investors with a proven business. It plans to expand the venture worldwide.

Why this matters
Equinix's strategy is a wrinkle in the love-hate relationship between communications service provides (CSPs) and cloud platforms. On one hand, the development of additional public cloud infrastructure offers new business opportunities to CSPs -- enterprises and consumers relying on apps that run in the cloud need connectivity to reach those apps, which creates demand for the services offered by telcos, cable companies and other network operators.

On the other hand, the public cloud creates high performance expectations from users that service providers struggle to meet: Users are used to controlling their cloud services through a web browser or mobile app, and turn up or shut down services in minutes, and they can get frustrated when they're unable to do the same thing with connectivity from service providers.

The move also adds another relationship layer to the increasingly complex cloud infrastructure and services sector, as Equinix teams up with a third-party investor to target a very specific set of hypercloud customers.

The relationship also adds yet another dimension to the increasingly tangled relationships between communications networking, data center and web services companies, all of which are increasingly partners as well as rivals.

In other cases, carriers are rejecting partnership deals. Australia's Telstra has been approached by web giants offering exclusive deals to partner on edge services if it restricts its role to connectivity provider; the company has apparently spurned those offers.

And cloud providers are starting to get into the connectivity business themselves. For example, Facebook is offering wholesale fiber to local and regional telcos. AWS unveiled its Global Accelerator networking service in November, providing connectivity to enterprise cloud customers. And of course Google launched Google Fiber ten years ago, with mixed results.