The reason, he thinks: Timing is critical to both networks and music. "The reason that network engineers are often good engineers is because we've been subnetting all our lives," he said.

And then he launched into song: "The Public Cloud Song," sung to the tune of Tracy Chapman's "Fast Car."

Unfortunately, we don't have a recording. But here's what it looked like: 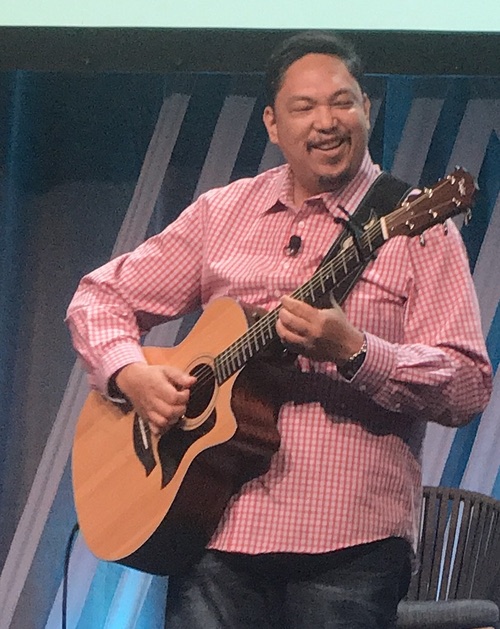 And here's a wide-angle shot, showing the lyrics. 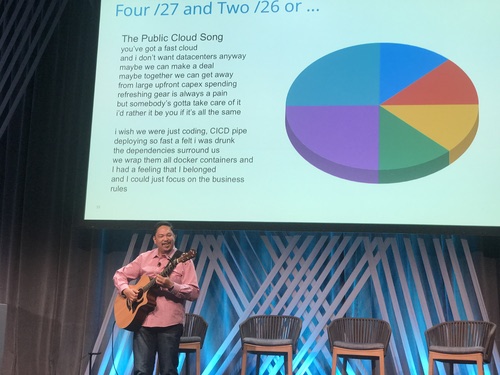 Full-size, more readable.
Boost your knowledge of cloud-native software and innovations driving data center transformations! Join us in Austin at the fifth-annual Big Communications Event May 14-16. The event is free for communications service providers -- secure your seat today!

"That was the theme song at Ticketmaster when we started our journey to hybrid cloud," Arigo said. The company initially hoped to shutter its data centers and go to public cloud. But that proved impractical. For more on that, see: Ticketmaster: 'Self-Inflicted DDoS' Is Our Business.

Michelle 4/15/2018 | 5:04:18 PM
Re: Just press play I would like to see the data on that as well. I hope there are large numbers of musician-engineers. We know music is good for the brain during childhood development and beyond.
Reply | Post Message | MESSAGES LIST | START A BOARD

kq4ym 4/15/2018 | 4:04:43 PM
Re: Just press play I wonder how true it is tha engineers are slso musicians, I would suspect that may very well be true of many professions where folks tend to be proficient at what they do. As a former music teacher, I know that only a small percentage of students end up a professional musicians but a lot of them end up in the professional world in other lines of work.
Reply | Post Message | MESSAGES LIST | START A BOARD

Of course it's not, but there is no video. If I had wheels, I'd be a wagon.

Maybe we could write our own public-cloud song. (That'd show them!)
Reply | Post Message | MESSAGES LIST | START A BOARD

Joe Stanganelli 3/31/2018 | 10:12:55 PM
Re: Just press play @Michelle: At least with the lyrics posted and knowing what song it's to the tune of, you can pretty much figure out how it goes.
Reply | Post Message | MESSAGES LIST | START A BOARD

Michelle 3/30/2018 | 1:34:22 PM
Just press play I am disappointed you didn't have the recording of the cloud song. It's the only reason I clicked the headline. I tried to find it elsewhere online - no luck.
Reply | Post Message | MESSAGES LIST | START A BOARD
EDUCATIONAL RESOURCES