Comment (1)
Tens of billions of intelligent, connected devices coming online represent a kind of "dark matter" that IT has been unable to see or secure, says Microsoft. The vendor seeks to shine a light on the darkness with new IoT security services launched.

The dark IoT devices, including smart devices in the home and workplace as well as industrial equipment, are powered by microcontroller units (MCUs). Every year, 9 billion MCU devices are shipped worldwide, Microsoft Corp. (Nasdaq: MSFT) says.

"The MCU devices are the dark matter of the computing universe," Galen Hunt, Microsoft distinguished engineer, and partner group program manager, Azure Sphere, said in an interview at the Microsoft Ignite conference in Orlando, Fla., last week. "They outnumber everything else ten to one and they haven't been connected until now." Microsoft estimates there will be 20 billion MCU devices deployed by 2020, and 80 billion by 2025, Sam Hunt, Microsoft director of Azure IoT, said. 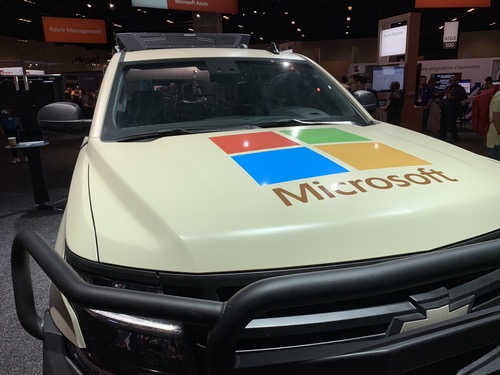 Connected cars, like this one on the Microsoft Ignite show floor, are among the billions of IoT devices that will come online and require securing in the next few years.
Now entering its fifth year, the 2020 Vision Executive Summit is an exclusive meeting of global CSP executives focused on navigating the disruptive forces at work in telecom today. Join us in Lisbon on December 4-6 to meet with fellow experts as we define the future of next-gen communications and how to make it profitable.

He added, "If the devices don't have security, they're an open playfield for hackers, and with MCU devices it's particularly concerning because they actually control physical things in your environment."

And often these devices are unsecured, simply because manufacturers found it impossible to build in security at IoT's low price point.

Additionally, many of these devices have not been secured because the risk was perceived as low -- which it was, before the devices were connected. For example, a Las Vegas casino was hacked through a fish tank thermometer. Hackers attacked through a vulnerability in the thermometer, which gave them a foothold on the network and access to the casino's high roller database, Hunt said. "You say, that's a fish tank thermometer -- why does it need to be secure? It's network connected."

Also, Microsoft announced last week that it is integrating IoT security into Azure Security Center, giving security pros a single pane of glass from which to manage security on a suite of Azure services, including IoT.

RituGupta 10/5/2018 | 11:20:05 PM
hi That paragraph just reminds me of how all of these big corporations around the whole are just trying to capitalise and monetize something that shouldn't have to be. At the end of the day, they just want to make money off providing people a service that should be made a free commodity. Information and access to information should not be held hostage because people are not able to afford logging into or gaining the connections to it!
Reply | Post Message | MESSAGES LIST | START A BOARD
EDUCATIONAL RESOURCES