IBM and the US Army have signed a 33-month, $135 million contract that will have Big Blue providing cloud and IT services to the division responsible for logistics support and data storage.

The US Army's Logistics Support Activity (LOGSA) and IBM announced the agreement on Tuesday, which is an extension of a deal that the two signed in 2012. In addition to the cloud, the contract covers cognitive computing, Internet of Things (IoT), security and software development.

While the original contract essentially established an infrastructure-as-a-service (IaaS) plan for the LOGSA -- the division pays for what cloud services it uses -- this new agreement will push the Army toward other areas, such as software-as-a-service (SaaS) and other cloud-based technologies, as well as IoT.

"Over the past four and a half years, LOGSA has benefitted from the business and technical advantages of the cloud," LOGSA Commander Col. John D. Kuenzli, wrote in a September 6 statement. "Now, we're moving beyond infrastructure as-a-service and embracing both platform and software as-a service, adopting commercial cloud capabilities to further enhance Army readiness." 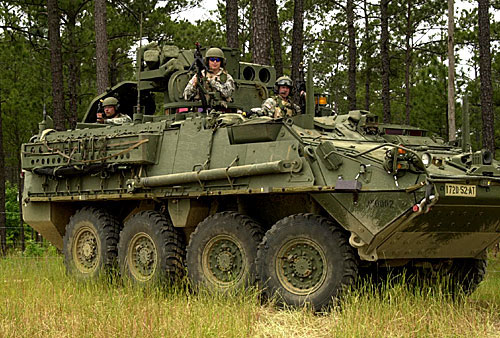 US Army's Stryker is the next IoT challenge
(Source: Wikipedia)

For example, IBM and the Army are using on-board sensors within vehicles that collect some 5 billion data point that are fed into the Watson IoT service. The system then analyzes all that data, including structured and unstructured data, to create predictive models that can recommend repair schedules to ensure that these vehicles won't break down.

IBM and the Army have already done a proof-of-concept test of this IoT system that includes about 10% of the Army's Stryker fleet.

The contract also calls for expanded programs that include cybersecurity, cognitive computing and faster application development and delivery.

The US Army and IBM have a history of contracts for various IT services. Earlier this year, the computing giant signed a five-year, $62 million deal to provide private cloud services for one of the Army's main missile testing and deployment arsenals. (See US Army Drafts IBM for Private Cloud.)

kq4ym 9/18/2017 | 9:32:13 AM
Re: Hmm.. Does IBM support any other country's military? IBM and others should see a "booming" business in coming years as the military seemingly is building up it's infrastructure, and the cloud business should see great things happening as the administration favors all things defendin the country from tanks to aircraft and aid to friendly nations.
Reply | Post Message | MESSAGES LIST | START A BOARD

It looks like Canada uses IBM for some military healthcare services, but that's not quite the same...