Yahoo Japan is the largest portal in that country, bigger there than Google in search and mail, Amazon in shopping, eBay in auction, and Netflix in streaming. "Because of their success, they've experienced traffic growth that's unprecedented, and had to increase their infrastructure," Apstra CEO/founder Mansour Karam tells Enterprise Cloud News.

Yahoo Japan is partly owned by SoftBank Corp. , and is independent of its former US parent, Yahoo, which Verizon Communications Inc. (NYSE: VZ) acquired in 2016. (See Verizon Sports Big Plans for Yahoo.)

Yahoo is looking to Apstra to automate standing up, configuring and manage multivendor elements of the cloud provider's 20,000 node network. Apstra will start on 500 devices, with plans to expand, Karam says.

Apstra has been generating revenue globally since 2016, with hundreds of nodes in production, according to Karam. 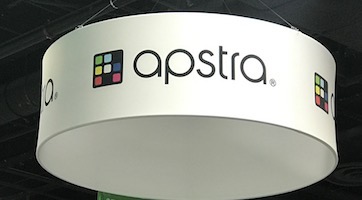 Apstra's AOS intent-based networking software automates network configuration by allowing network operators to state their intent -- what they want the network to do -- and leave the particulars of configuring ports and feeds to AOS.

"The Apstra intent-based analytics allow us to specify how we want our network to operate. We tell AOS what we want to happen vs. doing it ourselves," Kenya Murakoshi, senior manager of the site operations division within the system management group at Yahoo Japan, said in a statement from Apstra. (See Yahoo Japan Deploys Apstra for Intent-Based Networking.)

Murakoshi adds, "Apstra's telemetry then provides deep insight into the state of our network and alerts us if there are risks like cabling or traffic imbalance issues that need to be addressed. Deployment of AOS at Yahoo! Japan went smoothly without major issues."

Yahoo Japan met exploding Internet traffic by adopting a leaf-spine networking architecture to accommodate large volumes of east-west data center traffic, essential to supporting web applications, Karam says. The Japanese business modeled its architecture on Facebook . However, where Facebook had to write its own automation tools, Yahoo Japan, a decade later, is able to purchase the equivalent from Apstra, Karam says.

Cisco popularized the idea of intent-based networking in a strategic announcement last year, and Juniper Networks Inc. (NYSE: JNPR) got into the intent-based automation game a couple of months later. (See Cisco Revs Up Network Automation and Intent-Based Networking: What Does It Mean for Your Cloud?.)

But Apstra is different in a couple of ways: It was earlier, launching in 2014. And Apstra is vendor-agnostic.