Juniper turned in gloomy results for the fourth quarter and fiscal 2018 on Tuesday, due to weakness in the cloud and service provider business. But it noted bright spots, including enterprise and security, and said it expects to return to growth in the second half of 2019. 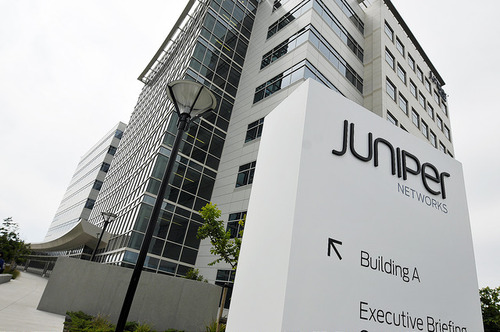 Juniper attributed the slowdown to cloud and service provider business woes, but said enterprise and security are growing. Enterprise business grew 13% sequentially in the quarter and 14% year-over-year. Security grew 34% sequentially in the quarter and 18% year-over-year and beat $100 million quarterly revenue for the first time in several years. Software grew 32% year-over-year, accounting for more than 10% of revenue during the fourth quarter. Software will continue to increase as a percentage of revenue over time, CEO Rami Rahim said on an earnings call with analysts Tuesday.

On the other hand, service provider revenue declined 15% year over year for the quarter, and cloud revenues declined 8% year-over-year.

The decline in cloud business comes from "cloud customers now consuming the capacity they have built into their networks and, yes, running them harder before they increase their build-up," Rahim said.

Juniper expects to return to growth during the second half of 2019. The company expects improved revenues from an upcoming 400Gbit/s switch, as well as the transition of service providers to 5G and telco cloud. Cisco Systems Inc. (Nasdaq: CSCO) and Arista Networks Inc. already have 400Gbit/s switches, and Arrcus supports 400 Gbit/s on white box switches. (See Arista Promises New 400G Switches for These Cloudy Times, this Cisco press release and Arrcus Takes White Box Switches to 400G.)

Additionally, Juniper expects a strong year for new product introductions, refreshing nearly all its product lines. These include a new MX line card for carrier 5G, a 400Gbit/s platform that will help Juniper gain inroads into the data center, and improvements to its Contrail Enterprise Multicloud platform to help midsized to large enterprise customers transition to multicloud, Rahim said.

Also, Juniper plans new silicon photonics capacity, to be introduced at the upcoming OFC Conference in March in San Diego.

On the other hand, Juniper expects continued weakness in the cloud and service provider verticals. And the US government shutdown was a blow for Juniper as the federal government comprises about 15% of enterprise revenue.

Juniper is struggling to transition its business from legacy to new hardware, as well as software and services. That's a struggle shared by other vendors. To cite three examples: IBM is looking to move to cloud, analytics and cognitive computing; Cisco is in a multi-year transition from equipment sales to recurring revenue from software and services; and Oracle Corp. (Nasdaq: ORCL) is having difficulty transition its customers from on-premises to the cloud. (See IBM Had a Very Good Day in the Cloud , Cisco Reports Strong Q1, but Service Provider Business Lags Growth and How Long Will Oracle Just Tread Water?)

Juniper expressed confidence in its long-term business, and plans to enter a $300 million accelerated share repurchase program and increase its quarterly dividend by about 6% to $0.19 per share.