Cisco is extending data center-class networking and compute to the cloud, edge and Internet of Things -- a strategy it's calling "data center anywhere."

Additionally, Cisco revealed new Internet of Things products and services for the edge -- expanding intent-based networking "from the carpeted to the non-carpeted world," Cisco says. [Ed note: What about the world of rugs?]

"There is nothing centralized about data anymore," Dan McGinnis, Cisco lead data center product marketing for networking, tells Light Reading. Centralized data centers are still important, but public and private clouds are becoming equally as important. And Internet of Things and mobile devices are driving the need for networking and compute to the edge -- this is particularly an issue for telcos. 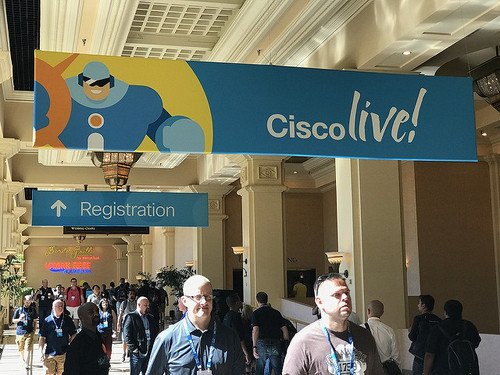 CiscoLive 2017
Light Reading is bringing together all of the key players in the automation revolution in a NEW location! Don't miss the Telco Automation Everywhere event on April 2 in New York City. Join us as we tackle the business and technology challenges behind building autonomous networks. This event is free for communications service providers -- register today!

The availability of new HyperFlex for Branch systems simplifies the administration of remote locations, like retail outlets. "You just ship the systems out there, have someone rack it, connect it and do everything else remotely," Tod Brannon, Cisco director of product marketing for compute, tells Light Reading.

The technology is useful for telcos looking to simplify administration of remote points of presence, particularly with the emergence of 5G.

The vendor is streamlining its data center software enterprise agreements for standardized three- and five-year terms. Organizations can add new software to the package -- for example, Cisco's Tetration analytics -- and then pay for what they use when the next license payment is due. That's designed to make it easy for organizations to try new software services from Cisco, Brannon says.

For telcos and other network service providers, Cisco is looking to make it easier to support edge applications that will become more prevalent as the Internet of Things (IoT) expands and as 5G architectures (including distributed cloud capabilities) are deployed. Telcos such as AT&T have the resources to build their own technology for the edge, but smaller telcos need Cisco's help, McGinnis says (or hopes).

Cisco's move beyond the data center competes with a similar initiative by VMware Inc. (NYSE: VMW), which announced its software networking strategy unifying the data center, branch offices and the cloud, in the spring. (See VMware Takes On Cisco & Juniper With Network Vision and How VMware Plans to Put the Screws on Cisco.)

And Arista Networks Inc. announced plans to extend its data center networking to the campus in the summer with its acquisition (for an undisclosed sum) of Mojo Networks, a move that added 250 employees to Arista's headcount. (See Arista Challenges Cisco on Campus Networks and Arista Finds Its Campus Mojo.)

The new hardware devices, in the company's Catalyst line, include ruggedized, automated hardware with a modular design that can easily be upgraded to support 5G and beyond, Vikas Butaney Cisco VP product management, IoT, tells Light Reading. In IT, products turn over every two to five years, but in factories and other industrial Internet locations where IoT is emerging, turnover is more like seven to ten years, meaning products need to be upgradable in place.

For carriers, the Cisco initiative presents a couple of opportunities: IoT installations often use cellular connections between tens of thousands of devices connected through routers, while other devices, such as smart meters on homes or connected cars, have direct connections to cellular networks.