The settlement, due Aug. 20, "will result in the dismissal of all pending district court and [US International Trade Commission] litigation between the parties," according to the document.

The two companies also issued a joint statement: "Cisco and Arista have come to an agreement which resolves existing litigation and demonstrates their commitment to the principles of IP protection. They have agreed that, with limited exceptions, no new litigation will be brought over patents or copyrights related to existing products, for five years. In addition, for three years, they will use an arbitration process to address any patent issues regarding new products. As part of this agreement, Arista will be making a $400m payment to Cisco, is committed to maintaining the product modifications it made as a result of previous rulings, and will be making limited changes to further differentiate its user interfaces from Cisco's," the companies said in a joint statement.

The settlement doesn't close out the litigation entirely, part of the lawsuit continues in appellate court, regarding legal protections for user interfaces, the companies said. 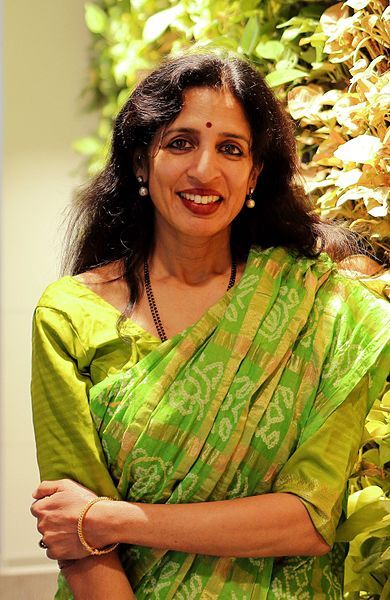 Arista CEO Jayshree Ullal. Photo by Theolive123 [CC BY-SA 4.0], from Wikimedia Commons
Now entering its fifth year, the 2020 Vision Executive Summit is an exclusive meeting of global CSP executives focused on navigating the disruptive forces at work in telecom today. Join us in Lisbon on December 4-6 to meet with fellow experts as we define the future of next-gen communications and how to make it profitable.

Additionally, Arista agreed to make modifications in its command line interface (CLI). That interface was crucial to the litigation, which was initially filed in late 2014. Cisco charged that Arista ripped off Cisco's command line interface and commands, which gave Arista a competitive leg up because the many network engineers trained in Cisco equipment would have a big head start in operating Arista gear. Arista countered that the CLI is an industry standard and not Cisco's intellectual property. (See Arista CEO: Cisco Lawsuit Is 'Smear Campaign' and Cisco Slams Arista With Massive Patent & Copyright Suit.)

Arista later counter-sued and the litigation spread over multiple jurisdictions.

As a result of the agreement, Arista will revise its second quarter 2018 financial results reported Aug. 2, to record a legal settlement charge of $405 million to operating expenses, which includes legal fees, and a reduction of $99 million to its provision for income taxes, resulting in revised GAAP net loss for the quarter of $155 million. (See Arista Passes $2B Run Rate with $519.8M 2Q Revenue, Up 28.3% YoY.)

The settlement is a nice chunk of change for Arista, which in its earnings report last week bragged that it had just cleared $2 billion annual run rate. However, the settlement removes a serious threat; the company had been barred at times from importing its equipment from to the US from outside manufacturers, and had to rewrite its code to remove the disputed intellectual property.

kq4ym 8/17/2018 | 7:38:49 PM
Re: A bargain I wonder how much the attorney fees were for Arista or how much would be contemplated if there were no settlement. i would guess those numbers had a great deal to do with what has come about even when considering who might be legally correct or at least the lawyers led them to believe they were.
Reply | Post Message | MESSAGES LIST | START A BOARD

The pre-IPO lawsuit you're probably thinking of was the OptumSoft vs. Arista suit, which had nothing to do with Cisco: https://www.forbes.com/sites/ryanmac/2014/06/05/on-the-verge-of-ipo-arista-networks-faces-lawusit-from-a-billionaire-cofounder/

Regarding Cisco's relationship with Arista, you might be mistaking Arista for one of Cisco's spin-ins (Insieme), but to clarify:

Cisco was never an investor in Arista. Arista was funded by Andy Bechtolsheim and David Cheriton.

Arista never used even a single line of Cisco code (and Cisco never accused Arista of doing so; see this blog post for more details: https://blogs.arista.com/blog/protecting-ip-or-market-share).

Arista's CEO (Jayshree Ullal) was not Cisco's CTO. She headed the switching business unit at Cisco, so she was a "mini-CEO" of switching, if you will. A very important role, to be sure, but not formally a "CxO".

The lady who was Cisco's CTO for a while is Padmasree Warrior. Before she went to Cisco, she was CTO at Motorola, and predicted that the iPhone was a "fad" that was going to fail. If you Google "Padmasree Warrior iPhone", you'll find the article she wrote. It's pretty hilariously wrong, not just in hindsight, but even at the time...
Reply | Post Message | MESSAGES LIST | START A BOARD

James_B_Crawshaw 8/6/2018 | 7:10:29 PM
Re: A bargain Well the stock did go up a few percentage points on the news so I guess it is seen as good though nott otally unexpected news. It is nice to see companies dropping the lawsuits  and focusing on differentiation through technology. We had a similar detente between Amdocs and Openet recently. In fact, litigation in the telecom industry appears to be on the decline somewhat as the video below explains.

Would be interesting to hear who is "everyone" in this context.

The suit was filed by Cisco in December 2014, almost to the day 6 months after Arista's IPO. The timing coincided with the expiration of the post-IPO lockup period for Arista employees, no doubt with the intent to screw Arista employees by torpedoing the stock price right around the time that people could start selling a little bit of stock.

This entire lawsuit has been bullsh*t from Day One. It was Cisco's last chance to slow down Arista, and it has had its intended effect of being hugely distracting and expensive for Arista.

On the corporate level, it was the 800 lb gorilla bullying a small, nimbler competitor who was earning market share with a superior product and support/customer service. On a personal level, it was pettiness from JC, Mario, Luca, and their gang, who were afraid that they were going to be "shown up" by Andy, Jayshree, and co. (and rightly so, as history now teaches us).
Reply | Post Message | MESSAGES LIST | START A BOARD
EDUCATIONAL RESOURCES