The retail industry will lead spending for cognitive and AI, overtaking banking this year by a slight margin, according to a report from analysts at International Data Corp. released Thursday.

Retail firms will invest $3.4 billion this year on AI use cases, including automated customer service agents, expert shopping advisors and product recommendations, and merchandising for omni-channel operations. Retail spending will overtake banking -- but just barely, as banking will spend $3.3 billion.

The third-largest industry will be discrete manufacturing, spending $2 billion, for a range of use cases including automated preventative maintenance and quality management investigation and recommendation systems.

The fourth-largest industry, healthcare providers, will allocate most of its $1.7 billion spending to diagnosis and treatment systems, IDC says.

"The cognitive/AI use cases that will see the largest spending totals in 2018 are: automated customer service agents ($2.4 billion) with significant investments from the retail and telecommunications industries; automated threat intelligence and prevention systems ($1.5 billion) with the banking, utilities, and telecommunications industries as the leading industries; and sales process recommendation and automation ($1.45 billion) spending led by the retail and media industries," IDC says.

"Three other use cases will be close behind in terms of global spending in 2018: automated preventive maintenance; diagnosis and treatment systems; and fraud analysis and investigation," according to IDC. "The use cases that will see the fastest spending growth over the 2016-2021 forecast period are: public safety and emergency response (75.4% CAGR), pharmaceutical research and discovery (70.5% CAGR), and expert shopping advisors and product recommendations (67.3% CAGR)." 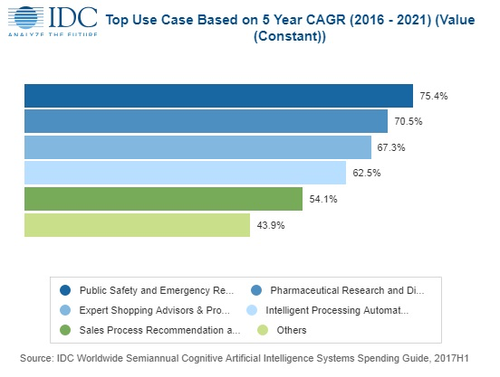 "On a geographic basis, the United States will deliver more than three quarters of all spending on cognitive/AI systems in 2018, led by the retail and banking industries," IDC says. "Western Europe will be the second largest region in 2018, led by retail, discrete manufacturing and banking. The strongest spending growth over the five-year forecast will be in Japan (73.5% CAGR) and Asia/Pacific (excluding Japan and China) (72.9% CAGR). China will also experience strong spending growth throughout the forecast (68.2% CAGR)."

Phil_Britt 3/22/2018 | 9:38:53 PM
AI not a Silver Bullet AI is fine for handling very low-level, mundane requests. And AI has improved. But just like autmomated voice response, too often companies rely too much on technology without realizing that if too many people leave, customers don't get the help they need and the remaining workers are disastisfied as well.
Reply | Post Message | MESSAGES LIST | START A BOARD
EDUCATIONAL RESOURCES