ORLANDO, Fla.  Microsoft Ignite  Quantum computing remains more of a theory than a practical means of solving complex, research problems. However, if Microsoft CEO Satya Nadella can be believed, it's creeping closer to reality.

During his keynote at the company's annual Ignite conference here, Nadella and a team of Microsoft researchers ditched the usual Windows, Office and Azure pitches to focus on the company's still evolving efforts to bring quantum computing into research departments, as well as the enterprise. (See Microsoft Serving a Slice of AI With Everything at Ignite.)

Quantum computing is viewed as the next great leap in computing, picking up where the world's largest supercomputers end. Microsoft stands as one of the few tech companies with the resources and financial backing to be able to explore this area of computer science. IBM has also pushed its own research into this area. (See IBM's Quantum Computing Coming to the Cloud.) 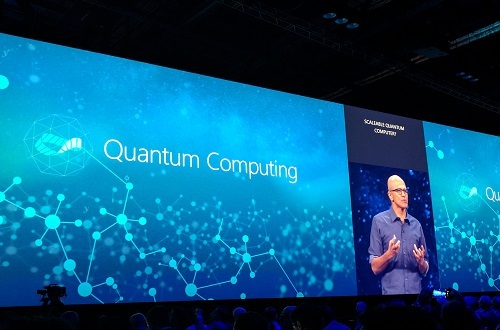 Unlike traditional computing, which is based on binary 1s and 0s, quantum computing uses quantum bits, or "qubits," that can represent 0, 1, or both numbers at the same time.

In addition to research efforts into issues from healthcare to global climate change, quantum computing can also provide greater security to various systems.

In his talk, Nadella noted that Microsoft's efforts to build a quantum computer stretch back a decade, starting under the auspices of former company Chief Research and Strategy Officer Craig Mundie.

"We set out with a goal of not just trying to achieve a few scientific milestones, but we went back to the very first core principles and asked what would it take to build a truly scalable quantum computer," Nadella said during the keynote.

One the biggest advances within its research is what Microsoft calls the topological qubit.

Since qubits are inherently unstable, this method actually divides the electron that makes up the qubit so it can live within two different sections of the system. It's both local and global and provides some of the stability to make the quantum computer work.

In addition to creating topological qubits, the researchers are working to create additional stability for the quantum system by using a deep freeze -- about absolute zero, or30 millikelvin -- to help keep the electrons from coming apart. At this level, the system that hosts the quantum system is colder than the temperatures found in deep space. In order to create the total system, a traditional-architecture computer operating at cryogenic temperatures is used to control the quantum computer. 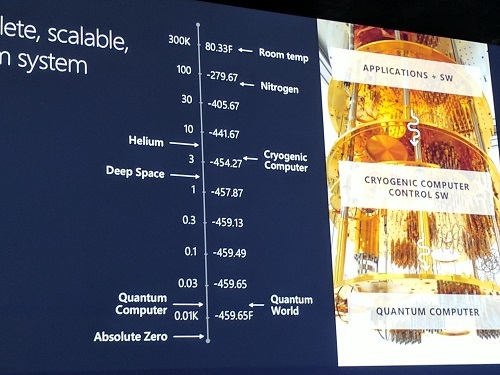 However, one of the main breakthroughs that Nadella and the researchers discussed was a new programming language that can allow developers to create apps to help debug quantum systems. The language, which the company did not name, is integrated within Visual Studio and will be available for previews by the end of the year.

In addition, developers that sign up can use Microsoft Azure to simulate more than 40 qubits of computational power.

Microsoft also plans to offer a simulator that works on a computer where developers can test their various algorithms to see how they would perform within the quantum system.

mhhfive 10/2/2017 | 8:07:39 PM
Re: Bob and Alice meet @MSFT I know there are some projects that are trying to create a standard quantum computing programming language.. but I haven't followed how much progress they've made. Presumably, it's dependent on the advances in QC hardware....
Reply | Post Message | MESSAGES LIST | START A BOARD

You are right about the time it may take to find a real use case...
Reply | Post Message | MESSAGES LIST | START A BOARD

Meh. Quantum computing isn't going to be able to perform general computational problems for quite some time. There is no programming language....
Reply | Post Message | MESSAGES LIST | START A BOARD

Ariella 9/26/2017 | 2:12:45 PM
Re: Bob and Alice meet @MSFT @Michelle Yes, we should consider whose vision proved more accurate and compare shows like Star Trek  and The Jetsons.
Reply | Post Message | MESSAGES LIST | START A BOARD

Michelle 9/26/2017 | 1:11:18 PM
Re: Bob and Alice meet @MSFT Agreed. I think we're still far away from any practical use for quantum computer, but that day will come. The future of computing will look a lot different than today.
Reply | Post Message | MESSAGES LIST | START A BOARD

Ariella 9/25/2017 | 9:44:22 PM
Re: Bob and Alice meet @MSFT @Michelle That would be regarded as a heretical statement by any Apple fan. Happily, I'm not in that group. It's true that Quantum computing really has the potential to effect a paradigm shift.
Reply | Post Message | MESSAGES LIST | START A BOARD

I think this beats any Apple announcement of late :)
Reply | Post Message | MESSAGES LIST | START A BOARD
EDUCATIONAL RESOURCES