Is Apple's Car 'The Mother of All AI Projects'?

The rumors that have swirled around Apple's Project Titan have died down considerably over the last 18 months as the company has shifted focus to other areas. Now, however, CEO Tim Cook has breathed new life into company's much ballyhooed endeavor.

In an interview with Bloomberg on June 13, Cook noted that the company is indeed working on a type of autonomous systems for vehicles, which he called "the mother of all AI projects."

The Apple Inc. boss noted three trends that are shaping the vehicle industry right now: Electric-fueled cars, autonomous systems creating self-driving vehicles and ride sharing, popularized by companies such as Uber and Lyft. Taken together, these three technologies form the core of what Apple might do in the car market with adding in its own flavor of artificial intelligence.

"I think there is a major disruption looming there. Not only for self-driving cars but also the electrification piece," Cook told Bloomberg. 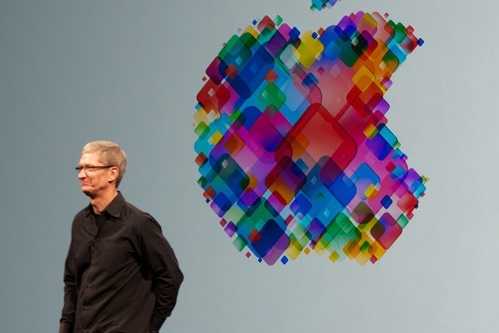 Not your father's Apple Car
(Source: Mike Deerkoski via Wikipedia)

As with all things Apple, Cook was purposely vague about what the company had in store. Rumors have swung from the company building its own car, to perhaps creating a reference model for an Apple car that a manufacturer could follow. Or the company could be building an interface that takes advantage of the AI and machine learning found in Siri.

However, Cook did hint that this project is difficult and that may be the reason Apple hasn't talked about it for the last few months. Either way, look for AI to play a big role in the iPhone maker's future.

"It's probably one of the most difficult AI projects to work on, and so autonomy is something incredibly exciting for us but we'll see where it takes us," said Cook. "We're not saying from a product point of view what we will do but we are being straightforward that it's a core technology that we view as very important."

Apple is also getting deeper into augmented reality, as well as virtual reality.

Despite the interview, Apple remains tight-lipped about Project Titan -- which is reportedly the codename for Apple's self-driving car project -- although paperwork filed with the California Department of Motor Vehicle and the National Highway Traffic Safety Administration have shed some light on what the company is planning.

For a time, the number of engineers working on Project Titan kept growing and growing until the company put the brakes on several months ago -- about the time tidbits from the project dried up.

Susan Fourtané 6/30/2017 | 10:37:38 PM
Apple's Car As with every big project, especially first generation ones, Apple will not reveal the totality of its plans, or how advanced the project is. On a different note, I thing there are plenty of projects called "Titan" in the cooking. -Susan
Reply | Post Message | MESSAGES LIST | START A BOARD

[email protected] 6/26/2017 | 12:50:04 PM
Re: Possibility and reality There are so many working on self-driving cars, AI and automation it will be a race to the finish, however, if legislation does not keep up we will find ourselves with great technology that isn't truly available to the general public. We are seeing technology move into so many new areas without full consideration of the implications. This is just one of them.
Reply | Post Message | MESSAGES LIST | START A BOARD

kq4ym 6/26/2017 | 9:18:30 AM
Re: Possibility and reality Well, we certainly aren't getting any real info from Apple yet of the mystery project. Maybe there's a clue when "Cook did hint that this project is difficult," which may mean either we see some real stuff happening eventually, or we don't because it was really really difficult?
Reply | Post Message | MESSAGES LIST | START A BOARD

danielcawrey 6/18/2017 | 2:44:21 PM
Re: Possibility and reality If Apple is really building an AI-based car, I would anticipte it will take years to become commercialized.

It's still too early. I know people want to believe the driverless future is near. However, the reality is that people still drive. Almost everyone still does.
Reply | Post Message | MESSAGES LIST | START A BOARD

[email protected] 6/14/2017 | 12:10:21 PM
Re: Possibility and reality Exactly if it can't be monetized to achieve a revenue stream that will create leadership, it doesn't warrant the investment. AI is not the panacea or the apocalypse of mankind as so many headlines shout, it is simply another form of technology innovation that we will harness for the appropriate uses.
Reply | Post Message | MESSAGES LIST | START A BOARD

Scott_Ferguson 6/14/2017 | 12:03:40 PM
Re: Possibility and reality @maryam: I think that is also the reasons Cook said it was such as a tough project. Not only is the tech hard to master, but what do you do with it once you have created it? Where's the value add?
Reply | Post Message | MESSAGES LIST | START A BOARD

[email protected] 6/14/2017 | 11:59:12 AM
Possibility and reality Apple is being realistic about the possibility and reality to monetize AI, while it is the hot topic of discussion today, so many of the expectations of what it can do are exaggerated and inflated. It will take time for AI to become proficient and we will need to live through the bumps in the road to get us there.AI will find its place in repetitive tasks but I think it will be a long time until AI finds its place in any task requiring judgment or impacting life and death decisions.
Reply | Post Message | MESSAGES LIST | START A BOARD
EDUCATIONAL RESOURCES