IBM is taking a major step with bringing quantum computing into the mainstream with a new project called Q Network, which will give businesses, government agencies and research universities access to Big Blue's quantum systems.

JPMorgan Chase, Daimler AG, Samsung Corp. , Oak Ridge National Lab and Oxford University are among some of the enterprises and other organizations that are joining IBM Corp. (NYSE: IBM) Q Networks.

These businesses, agencies and universities will now have access to IBM's 20 qubit quantum computer. Big Blue also has plans to construct a 50 qubit system and supporting processors. 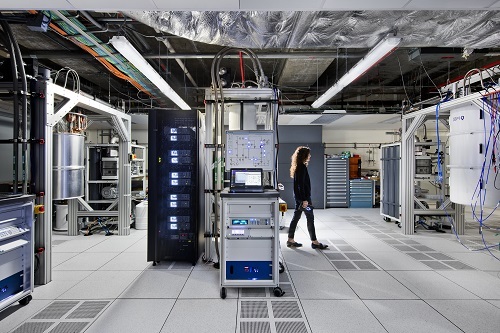 A quantum computing system to call your own
(Source: IBM)

As part of the new Q Network, IBM and its partners are planning to build four regional quantum computing hubs, which includes one each in Japan, the US, the United Kingdom and Australia.

As of Thursday, IBM notes that over 60,000 users have run about 1.7 million quantum experiments through its Q Experience program.

With its long traditional in building supercomputers and other high-performance computing systems -- think of the days of Road Runner and the Blue Gene family -- it's not surprising that IBM is plunging head-first into quantum computing. (See IBM's Quantum Computing Coming to the Cloud.)

"IBM sees the next few years as the dawn of the commercial quantum era -- a formative period when quantum computing technology and its early use cases develop rapidly," Dario Gil, vice president of AI and IBM Q at IBM Research, wrote in the December 14 announcement. "The IBM Q Network will serve as a vehicle to make quantum computing more accessible to businesses and organizations through access to the most advanced IBM Q systems and quantum ecosystem."

The other big tech firm that sees a future in quantum computing is Microsoft Corp. (Nasdaq: MSFT), which released its own developer kit and a new programming language called Q# this week to allow developers to create simulations. (See Microsoft Releases Quantum Development Kit & Programming Language.)

IBM offers a similar set of developer tools through its QISKit kit.

When it comes to the new Q Network members, the different companies and organizations plan to focus on their particular area of expertise. For instance, Daimler is planning to research new ways of developing materials to manufacture automobiles. The company is also planning on using quantum computing to develop autonomous cars, as well as how to better route fleet logistics.

Michelle 12/31/2017 | 10:25:35 PM
future now This is an exciting development! I've been waiting for quantum computing to open up to more folks. This is how we'll finally get a clear picture of what can be done (or at least closer to it). The promise of quantum computing is fascinating. Real-world applications should be very interesting. I'm looking forward to future updates of this project.
Reply | Post Message | MESSAGES LIST | START A BOARD
EDUCATIONAL RESOURCES
sponsor supplied content
IDC Whitepaper: Key Considerations When Operationalizing Artificial Intelligence Strategy
Design Guide: best-in-class hybrid IT infrastructure with AWS Outposts
Blueprint: optimize data exchange with AWS Outposts
Ericssons Cloud RAN e-book: A comprehensive guide to adopting, deploying, and scaling virtualized 5G in your networks
The Four Key Components of Cloud RAN
How to get the most out of 5G mid-band in Cloud RAN
QCT Introduces New Innovative Family of Edge Servers for the Telco Marketplace.
TOOL - Interactive Experience: Learn how to Evolve your Architecture and Monetize Next Generation Metro and Edge Networks
Whitepaper  Achieving IP/Optical Convergence: Building from Existing Networks
Executive Guide  Enabling Next-Generation Metro and Edge Networks for Communications Service Providers
Educational Resources Archive
More Blogs from Scott Ferguson
Podcast: Agile IT & the Rush Toward Digital Transformation - Sponsored by SAP