Google has seen the future and it's artificial intelligence. Now, however, the search engine giant is putting its financial muscles behind a new venture capital fund that will filter money to a number of new AI startups.

The company hasn't said much about this new fund, although multiple reports indicate that Anna Patterson, a vice president of engineering at Google who specializes in AI, will oversee the new fund. These reports also indicate that this fund will be driven by engineers rather than the money men and women typically associated with this type of venture, with the company also looking to supply mentorship, advice and even working space.

The fund is expected to make investments of $1 million to $10 million depending on the startup.

The market for AI, machine learning and analytics startups has been getting attention lately thanks to two significant acquisitions. In May, Apple confirmed it bought Lattice Dark, a company that specializes in analyzing "dark data" for an undisclosed sum. (See Apple Quietly Acquires Machine Learning Specialist Lattice Dark.) 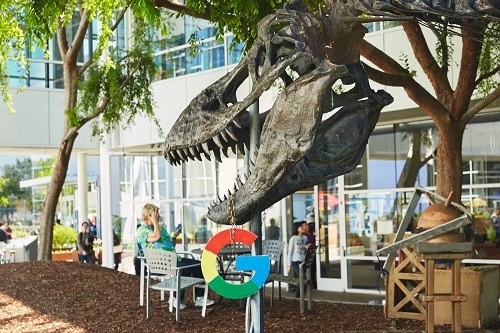 Not a tech dinosaur.
(Source: Google)

At about the same time, Cisco announced it would pay $125 million for MindMeld, another startup that is developing AI and natural language applications. Cisco plans to use some of this technology within its Spark cloud computing collaboration products. (See Cisco Buying AI Specialist MindMeld for $125M.)

By getting into specific AI investments, Google is joining a number of big tech firms putting money into the technology, as well as a number of independent venture capital firms, including Y Combinator, Sequoia Capital and Andreessen Horowitz.

However, it's not clear why Google hasn't talked much about this, especially since its Google Ventures fund is well known. In addition, the company talked openly about how AI fits into its plans during its recent I/O 2017 conference, including an update to its Tensor Processing Unit (TPU) chips that is expected to push the limits of machine learning. (See Google's TPU Chips Beef Up Machine Learning.)

One possibility is that Google might want a first crack at buying these startups.

Also of note, the new fund and its executives will report up through Google proper, and not through Alphabet -- the overall corporate umbrella.

kq4ym 6/8/2017 | 9:23:56 AM
Re: 8/28/17 Very interesting that Google is going to put the decision making in the hands of engineers instead of the traditional money men and woman who normally choose to hand out millions of dollars to startups and those companies in the AI field. It will be interesting to watch to see how the engineers do compared to the previous way of selecting candidates.
Reply | Post Message | MESSAGES LIST | START A BOARD

I really do think AI has the opportunity to take computing to the next level. Amazingly, we're still stuck using keyboards and touchpads. AI will be the new interface.
Reply | Post Message | MESSAGES LIST | START A BOARD

JohnMason 5/31/2017 | 12:14:30 PM
Re: Tribeca If I recall correctly, Tribeca emphasized engineers over financial experts because they found engineers communicated best with other engineers, not just in terms of knowledge, but in terms of culture. I am guessing the same applies to the AI industry. Google is going the right thing, in my opinion.
Reply | Post Message | MESSAGES LIST | START A BOARD

Scott_Ferguson 5/31/2017 | 12:07:32 PM
Re: Tribeca @John: For sure. What I thought was interesting about this was that it focused on one technology -- AI -- and that a lot of the decisions would be made by engineers over the money people. I think that makes it a very unique approach.
Reply | Post Message | MESSAGES LIST | START A BOARD

JohnMason 5/31/2017 | 10:54:36 AM
Tribeca Sounds a little like what Tribeca Venture Partners has been doing for awhile. (I believe they came to my campus once to recruit.) Big companies have been strategically using in-house venture funding for some time.
Reply | Post Message | MESSAGES LIST | START A BOARD
EDUCATIONAL RESOURCES
sponsor supplied content
IDC Whitepaper: Key Considerations When Operationalizing Artificial Intelligence Strategy
Design Guide: best-in-class hybrid IT infrastructure with AWS Outposts
Blueprint: optimize data exchange with AWS Outposts
Ericssons Cloud RAN e-book: A comprehensive guide to adopting, deploying, and scaling virtualized 5G in your networks
The Four Key Components of Cloud RAN
How to get the most out of 5G mid-band in Cloud RAN
QCT Introduces New Innovative Family of Edge Servers for the Telco Marketplace.
TOOL - Interactive Experience: Learn how to Evolve your Architecture and Monetize Next Generation Metro and Edge Networks
Whitepaper  Achieving IP/Optical Convergence: Building from Existing Networks
Executive Guide  Enabling Next-Generation Metro and Edge Networks for Communications Service Providers
Educational Resources Archive
More Blogs from Scott Ferguson
Podcast: Agile IT & the Rush Toward Digital Transformation - Sponsored by SAP