Gradient won't just provide startups with money; the new companies will also get access to Google experts and bootcamps, while Google takes a minority stake in startups in which it invests, according to a post on the Google blog announcingGradient on Tuesday.

The company's AI investments have already begun, including Algorithmia, a marketplace for algorithms and functions, as well as Cogniac, a tool suite for creating and managing visual models, Alphabet says. 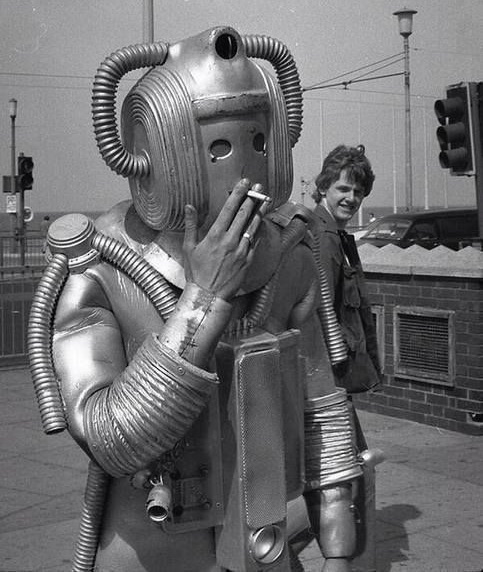 A cyberman from the TV series Doctor Who, in the 1960s. Definitely artificial, but if it were truly intelligent, it would know smoking is bad for you. Via Vintage Geek Culture

Gradient will invest in ten to 15 deals this year, committing $1 million to $8 million each, according to a CNBC article. Alphabet is looking to spur innovation in AI.

Alphabet declined to comment to Enterprise Cloud News, but pointed us to the CNBC article.

Gradient portfolio companies will be able to get advanced AI training from Google, with a Google engineer working onsite and providing assistance for a set period of time, CNBC says.

In addition to Algorithmia, other startups already participating in the program include: Aurima; Cape, a service for remotely controlling drones; and Dyndrite, CNBC says.

Separately, Google this week announced the People + AI Research initiative (PAIR), to study and redesign the ways people interact with AI systems, according to a post on the Google blog.

AI is a growing opportunity for technology providers. Enterprises are looking to increase AI and cognitive computing spending by nearly 60% in 2017, to $12.5 billion by the end of the year, according to IDC. (See AI, Cognitive Spending Soaring to $12.5B in 2017.)

kq4ym 7/25/2017 | 8:11:40 AM
Re: Race And not only may the payoff financially be good if a small percentage take off, it seem that because Google is putting some of it's people to work cooperatively they may have a greater control in what direction to lead the projects.
Reply | Post Message | MESSAGES LIST | START A BOARD

Phil_Britt 7/17/2017 | 10:31:05 AM
Re: Race I agree that it looks like a good strategy. Google/Alphabet has enough cash to invest in multiple startups and can win with a good batting average. If only one third of the investments pay off, but pay off handsomely, it will lead to a financial windfall.
Reply | Post Message | MESSAGES LIST | START A BOARD

Susan Fourtané 7/15/2017 | 8:01:25 AM
Artificial Intelligence in the 1960s Mitch  Nice job finding Dr Whos Cyberman from the 1960s. :) I wonder where the picture was taken. I also wonder if the other guy in the photo ever thought his face was going to be all over the Internet or the world more than 50 years after. I also wonder if he, or the smoking cyberman are still alive. But your picture made me also wonder about artificial intelligence in the 1960s. I found this short video quite interesting: https://youtu.be/aygSMgK3BEM
Reply | Post Message | MESSAGES LIST | START A BOARD

Susan Fourtané 7/14/2017 | 2:42:56 PM
Interaction with AI Indeed, Daniel, its a race. I find the People + AI Research initiave quite interesting. One of the most fascinating things about AI is about the ways people are going in interact with AI systems and the learning this will involve. Since there are going to emerge two defined groups: Those for AI and those against it, interaction is going to take an important role, as well as considerations on the ethics of AI.
Reply | Post Message | MESSAGES LIST | START A BOARD

I like Google's strategy. It's similar to the one it executed during the cloud salad days. Invest and eventually acquire tons of small startups with niche expertise.
Reply | Post Message | MESSAGES LIST | START A BOARD
EDUCATIONAL RESOURCES