The Internet of Things is fast becoming a trillion-dollar industry. A recent report from IDC shows spending on IoT could reach $772.5 billion by the end of 2018, with the whole market headed toward $1 trillion by 2020.

Over the next four years, IoT spending is expected to increase by a compound annual growth rate (CAGR) of 14.4%. This means that by 2020, the market should hit the $1 trillion market and then increase to $1.1 trillion by 2021, according to IDC.

Spending on hardware, including sensors, modules, infrastructure and connected devices, is expected to be the biggest category, with $239 billion expected to be spent in 2018. However, IDC is predicting that IoT-related software will grow faster than any other category -- at a CAGR of 16%. 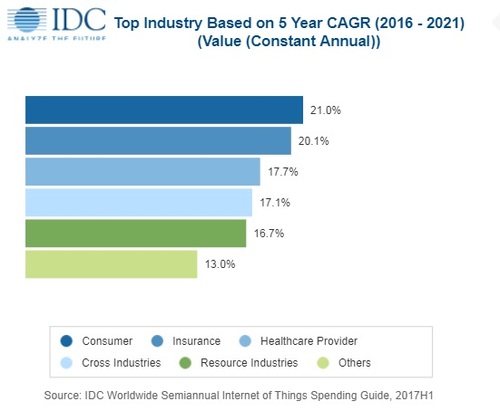 "Software creates the foundation upon which IoT applications and use cases can be realized," Carrie MacGillivray, an IDC analyst, wrote in the December 7 report. "However, it is the services that help bring all the technology elements together to create a comprehensive solution that will benefit organizations and help them achieve a quicker time to value."

It's this large increase in IoT spending across the board that has the industry looking to invest.

In October, Dell Technologies (Nasdaq: DELL) announced that it would start to leverage all the various components of its business, including Dell EMC, VMware, Secureworks, RSA, Boomi and Virtustream, into a new offering that Michael Dell called the "Distributed Core." The idea here is that IoT is forcing companies to create edge networks to process the data, but businesses also need the cloud and other data center equipment to store and further analyze IoT data to produce long-term results. (See Dell Putting Its Company Muscle Behind New IoT Strategy.)

The three biggest industries that will spend the most on IoT in 2018 are manufacturing ($189 billion), transportation ($85 billion) and utilities ($73 billion). IDC also predicts that cross-industry spending, which includes a range of markets such as connected cars and smart building, will represent about $92 billion in spending.

IoT-related consumer spending is expected to reach $62 billion by the end of next year.

China is expected to spend more than any other country on IoT. By the end of 2018, China will have spent some $209 billion on various IoT equipment and projects, with the US spending $194 billion. Japan and South Korea are also expected to be leading IoT spenders next year.

Ariella 1/2/2018 | 8:09:53 PM
Re: IoT spending @PhilBritt yes, though sometimes they just sell themseles on what they don't need or don't know how to implement because they are just chasing the new shiny thing out there. Shiny things can prove valueless to your business if they don't integrate into the overall strategy.
Reply | Post Message | MESSAGES LIST | START A BOARD

Phil_Britt 1/2/2018 | 4:23:18 PM
Re: IoT spending Yet there are still companies (and consumers) who get sold bills of goods (sometimes from executives) about how a new technology is a "must-have."
Reply | Post Message | MESSAGES LIST | START A BOARD

Ariella 1/2/2018 | 7:05:09 AM
Re: IoT spending @PhilBritt Absolutely, technology should never be pursued merely for its own sake. It has to fit in with the larger organizational goals to be of real value.
Reply | Post Message | MESSAGES LIST | START A BOARD

I fully agree. But those investing in IoT need to determine how the new gadget(s) will improve business. Too often firms make business investments without thinking through how to truly benefit from the technology.
Reply | Post Message | MESSAGES LIST | START A BOARD

Ariella 12/11/2017 | 5:29:41 PM
IoT spending We should be expecting exponential growth in this area. I think the time will come when the item that is not somehow connected to the internet will be the exception rather than the rule.
Reply | Post Message | MESSAGES LIST | START A BOARD
EDUCATIONAL RESOURCES
sponsor supplied content
IDC Whitepaper: Key Considerations When Operationalizing Artificial Intelligence Strategy
Design Guide: best-in-class hybrid IT infrastructure with AWS Outposts
Blueprint: optimize data exchange with AWS Outposts
Ericssons Cloud RAN e-book: A comprehensive guide to adopting, deploying, and scaling virtualized 5G in your networks
The Four Key Components of Cloud RAN
How to get the most out of 5G mid-band in Cloud RAN
QCT Introduces New Innovative Family of Edge Servers for the Telco Marketplace.
TOOL - Interactive Experience: Learn how to Evolve your Architecture and Monetize Next Generation Metro and Edge Networks
Whitepaper  Achieving IP/Optical Convergence: Building from Existing Networks
Executive Guide  Enabling Next-Generation Metro and Edge Networks for Communications Service Providers
Educational Resources Archive
More Blogs from Scott Ferguson
Podcast: Agile IT & the Rush Toward Digital Transformation - Sponsored by SAP