Trollope posted about his experience on Medium last week: "I Stand with the Dreamers."

"I was 11 years old when my parents divorced and my mother moved me and my 9-year old brother from Canada to Los Angeles," Trollope writes. "She was a free spirit, and neglected to get visas for herself or for us. She found us a school (of sorts), and she got herself a job right away. She met and married my stepfather, an American citizen, when I was 14."

He continues: "At 16, I visited Mexico. When I returned to the U.S., I was detained at the border. At the time, I had no legal right to be in the U.S. I was a high school student and until then I had no clue that I had been living here without the right documentation.

Trollope, as a boy, with his mother. 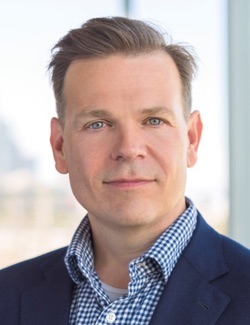 "We spent the next two years dealing with the INS under threat of deportation, until we were able to obtain green cards. I still remember how scared I was, and how, if not for the understanding and hard work of others, I might not have been able to stay in the country I knew as home.

"I went on to become an American citizen. I swore to protect this great country, which has given me and countless others an opportunity to create a rich and fulfilling life. I am still committed to protecting the path to citizenship for others.

"I was a dreamer, and I stand with the dreamers."

Trollope spoke with Enterprise Cloud News on Thursday. I asked him why he decided to write his essay.

"It felt like it was a relevant story to tell," Trollope said in an interview over (naturally) Cisco's Webex conferencing system. He was spurred by the controversy over the Deferred Action for Childhood Arrivals (DACA) order, which protects undocumented immigrants brought to the US as children by their parents.

DACA was ordered by then-President Barack Obama, and President Donald Trump on Tuesday said it will expire in six months, leaving legal residency in limbo for nearly 800,000 young people brought to this country by their parents without documentation.

"Immigrants are painted in a certain way," Trollope said. "People can end up in that situation in a lot of ways, and for a child its a scary thing. And I wanted to make my voice heard on it."

Trollope says he has not talked about his experiences publicly before.

"It never seemed relevant," he said, adding, "I value my privacy, frankly."

Trollope notes that he has gotten negative comments on his post, from people warning that "illegals" will bring in their families by the millions and take Americans' jobs.

For example, one comment on Trollope's Medium post, signed by "Dave Avery": "Those 850,000 'Dreamers' you speak of can bring in thousands of their relatives under the 'Chain Migration' act once they receive their American Citizenship! Is that what you really want?"

Trollope responds curtly, "Yes it is."

"What about the killer gang member dreamers and thieves?" responds Lex McGuire

Other comments are supportive. Anne Gadd Grandy writes: "I can relate to your story. I became a US citizen (born in Montreal) when I was 19. My dad was British, my mom French-Canadian. We also thought we could be 'asked to leave' even though we filled out alien address cards every January. We eventually became citizens. This was a moving experience that should be open to others. When we shut our doors and build walls, we close our hearts to our fellow humans."

Trollope's mother -- who now lives in Mountain View, Calif., where she teaches art -- brought her children to Los Angeles in 1983, and Trollope had his problem on the Mexican border five years later. "I had gone back to Canada a few times to visit. And every time I had come into the country from Canada, I just showed my passport and they stamped it and didn't ask any questions. I didn't know there was anything wrong," Trollope says.

But coming back from Mexico was different. "The border patrol person asked me 'are you a citizen, where is your paperwork?'" Trollope didn't understand the questions "He whisked me to a holding area and left me there for two hours. Of course that was terrifying." This was before the cell phone era, Trollope notes; he couldn't contact anyone.

Officials wanted to send Trollope "back to Mexico," Trollope says. "I'm not from Mexico," he told them. "I don't speak Spanish. I don't know anyone there." Trollope had been visiting Mexico City a few days.

"I was, obviously, kind of freaked out," Trollope says. "I pleaded with them that this wan't an acceptable solution. Somehow that got through to them; they understood." The authorities required Trollope to make a sworn declaration, with a date in court to sort the problem out.

"One thing that struck me at the time is that the INS is not a particularly friendly place for immigrants," Trollope says. "And it's not a fun process. You get there early in the morning, in LA, and you wait. There were thousands of people waiting. Families and kids and old folks. It was hot in the summertime. You wait for your number to be called and you can't leave. If your number is called and you're not there you lose your place."

Today, Trollope is senior vice president and general manager of Cisco's applications group, primarily overseeing software and software-as-a-service (SaaS), including collaboration technologies, the company's $1.4 billion AppDynamics acquisition and $3.7 billion Jasper acquisition, and Internet of Things. He reports directly to CEO Chuck Robbins and he sits on the executive leadership team. He oversees more than $5 billion in revenue and well over 5,000 employees.

Most of the feedback Trollope has received on his essay is "extremely positive," he says. "But like I mentioned there were a couple of folks challenging from the other side."

"I feel great about being an America," Trollope says. "I married an American. I have three kids born here. I feel this is an incredible country."

He adds, "I would not have had the opportunities I had here in any other country." Trollope has lived in England, in Canada, and seen the western world. "This is a special place, a very special country. I remember every single detail of the moment of the swearing ceremony, becoming an American citizen."

Says Trollope, "I made my way in this great country and I want other people to be able to do that."

kq4ym 9/20/2017 | 8:48:52 AM
Re: So many immigrants have stories like this... It would seem the universal "law" that would apply to these situations might be "compassion, empathy, and equality." While there are of course arguments on both sides of the issue, a global economy and easy travel makes it necessary to perhaps allow for greater mobility of the world's citizens.
Reply | Post Message | MESSAGES LIST | START A BOARD

Susan Fourtané 9/20/2017 | 3:14:19 AM
Re: So many immigrants have stories like this... Thats how a human with some common sense and a heart should act. Its mean to punish children of immigrants. I wonder if there is an universal law about this.
Reply | Post Message | MESSAGES LIST | START A BOARD

Phil_Britt 9/19/2017 | 1:15:28 PM
Re: So many immigrants have stories like this... Too many positins are taken without thinking them through to mollify a certain base. Remember how Rick Perry was booed during a Republican debate for saying people should have a heart regarding the children of immigrants?
Reply | Post Message | MESSAGES LIST | START A BOARD

Susan Fourtané 9/14/2017 | 11:01:34 AM
Re: So many immigrants have stories like this... Thats a pity. I think he doesnt care about how much he is damaging the whole country either with all his spoiled child-like behaviour. I dont see there will be any advancement in anything during his term. On the contrary. Sorry about that.
Reply | Post Message | MESSAGES LIST | START A BOARD

mhhfive 9/8/2017 | 12:24:59 PM
So many immigrants have stories like this... It's cruel to deport people covered by DACA. Congress really should change the law to help these people instead of punishing them for a crime they didn't knowingly commit.
Reply | Post Message | MESSAGES LIST | START A BOARD
EDUCATIONAL RESOURCES