Sure, Apple's products are overhyped. But they satisfy customers, and they get better every year.

Remember Buffy the Vampire Slayer? The fantasy TV series chronicled the adventures of a teenage girl with superpowers, and her friends, as they fought vampires and other supernatural menaces.

Every year, the world very nearly came to an end, but total destruction was averted at the last minute by Buffy and her plucky pals. It got to be a running joke on the show. When Buffy was finally killed (spoiler alert: she got better), the epitaph on her tombstone said, "She saved the world. A lot."

Apple is like that. Twice a year, Apple holds its big product announcement events. And every one of those announcements is revolutionary, world-changing, your-life-will-never-be-the-same.

I've been following Apple and using their products for ten years, since the iPhone introduction. I have a Mac, iPhone, iPad, Apple Watch, and I had a pair of AirPods until I lost the darn things in Las Vegas a few weeks ago. I'm still a loyal Apple user.

But am I happy? Enthusiastic? I use Apple products every day; can anybody be enthusiastic about something they use with that degree of frequency? Like any fan of anything (sports teams, Star Wars), I spend a lot of my time complaining.

And so, as always, I tuned in to the live stream of Apple's latest big announcement on Tuesday with a jaded eye. Apple introduced new Apple watches, an Apple TV and iPhones. Here are the highlights of what I found -- the good, the bad and the indifferent -- illustrated with screen captures of the video stream, as viewed on my trusty Mac. 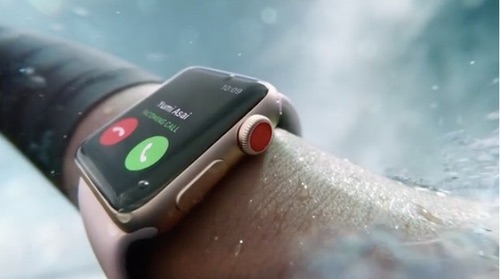 The Apple Watch is consistently underestimated, but this one looks like it might be the sleeper hit of the season, more important than new iPhones, which got all the glory.

The big difference between the Series 3 Apple Watch and its predecessors is that the Series 3 supports LTE. You can send and receive calls with the built-in speaker or a Bluetooth headset, listen to music, receive messages and send them using Siri dictation, get directions with Maps, and use the Watch as an activity and athletics monitor.

With this release, the Apple Watch finally finds its place in the world. Even though Apple has sold many Watches already, and customer satisfaction is high (I have one myself and like it a lot), it's a nice-to-have device, not a gotta-have device. If you have an iPhone in your pocket, the Watch is an added convenience. But you can already do everything you need to do on that phone so what do you need the Watch for?

With the Apple Watch Series 3, you don't need a phone nearby. The Apple Watch is for people who don't want to carry around a phone, and who aren't addicted to Facebook, Instagram or Snapchat. If you just want to be connected occasionally -- in case of emergency, for example -- and you want to do the other things the Watch can do, then it's the device for you. 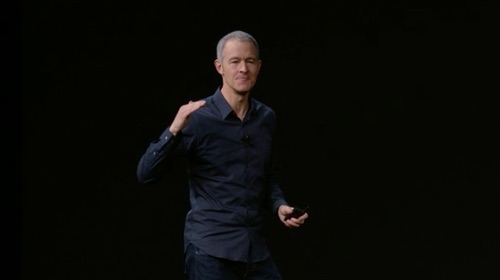 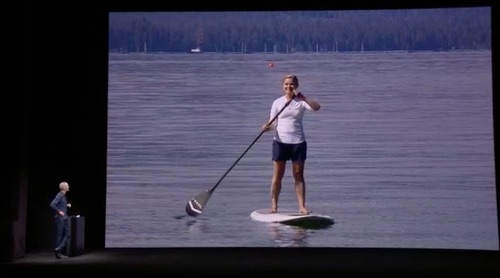 Williams demonstrates the Watch's phone quality with a call to Apple's Deidre Caldbeck, who takes the call on her Watch while standing on a surfboard. Hilariously, she struggled to perform this multitasking process without falling down. Sadly, she did not fall down, which would have been more hilarious. The audio quality was very good, by the standards of cell phone audio, and Williams noted it was all done with the cell connectivity and microphones available on the Apple Watch. In other words, the Watch is a practical device for making phone calls.

Midway through the Apple TV part of the presentation, the activity app on my Watch said it was time for me to get up and move around, so I went into the backyard and played with the dog for a minute.

When I came back, they got into the meat of the presentation.

New iPhones
The iPhone 8 and 8 Plus have what you'd expect from a new model of iPhones: New chips, better performance, better display and better cameras. In addition to portrait photo mode, introduced last year, the iPhone's built-in software can optimize lighting contours on the face when you compose a shot. And you can change the lighting in the Photos app later too. 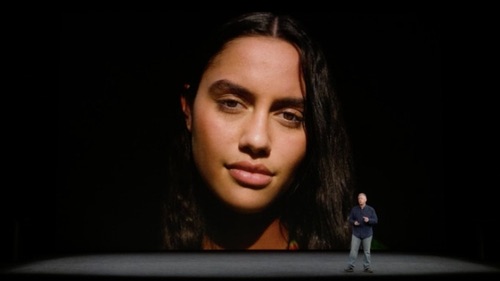 Phil Schiller, Apple senior vice president of worldwide marketing (the tiny man on the right), shows off the new portrait lighting feature on the iPhone 8.
Keep up with the latest enterprise cloud news and insights. Sign up for the weekly Enterprise Cloud News newsletter.

Next page: The iPhone X: The big finish

kq4ym 9/20/2017 | 9:07:36 AM
Re: Underestimation Perhaps the watch might be marketed to those folks who want to break the "facebook habit?" As noted the "Apple Watch is for people who don't want to carry around a phone, and who aren't addicted to Facebook, Instagram or Snapchat."I'm one of those folks who don't use the social media with regularity, and just keeping it "simple" is the way  I want to go. Maybe a new revolution of folks carrying a watch and little else?
Reply | Post Message | MESSAGES LIST | START A BOARD

Phil_Britt 9/19/2017 | 1:09:09 PM
Re: Ha! Wires are indeed useful for keeping track of things -- so I keep a wired mouse in my office. However, I find that hands-free Bluetooth earpiece is helpful, even though I have misplaced one or two over time. To prevent losses, I try to keep it in my ear or in a laptop case.
Reply | Post Message | MESSAGES LIST | START A BOARD

If I'm wrong, tell me how I'm wrong. Teach me something. Beyond a few barely useful features (e.g., synching with your iPhone for text-message/push-notification alerts), what are it's underestimations beyond HealthKit and a few particularized business cases? I'm not being critical for the sake of doing so. If there's something I'm missing, I welcome knowing about it.
Reply | Post Message | MESSAGES LIST | START A BOARD

Susan Fourtané 9/17/2017 | 10:59:59 AM
iPhone 8 Plus vs iPhone X Mitch  Apple Watch: I agree with your observations about the Apple Watch. With most of the same functions you can expect from your iPhone, the Apple Watch will become popular among many. Apple TV: I dont care about TVs. Not even if its Apple. iPhone 8 Plus and iPhone X: My current iPhone 6 Plus needs an upgrade. I was thinking this was going to be easier and I was just going to have the iPhone 8 Plus. But, now ... as you do, I also prefer a bigger screen, and 5.8 inches comparing to 5.5 on the iPhone 8 Plus may convince me to pay the extra $200. If I take advantage of Apples recycling program and take my iPhone 6 Plus to an Apple Store I can get an immediate $200 credit note that would automatically drop the price of the iPhone X to $800. :) And, because October 27 is my birthday, I cant think of a better present to give to myself. Animojis: I also found them cool. I think my favourites would be the hamster, the bunny, and the ET. Screen captures: Great job! I did the same, but couldnt get the Apple Watch as good as you did.
Reply | Post Message | MESSAGES LIST | START A BOARD

Susan Fourtané 9/17/2017 | 10:09:07 AM
She saved the world. A lot. Mitch before I can even start paying attention or thinking about any new Apple product, I need to ask: How is that that Buffy was finally killed? You said she got better. But ... is she a vampire now? I need to know. I need to know. I watched Buffy for a long time. Until I stopped. I dont remember when that was.
Reply | Post Message | MESSAGES LIST | START A BOARD

Susan Fourtané 9/17/2017 | 7:25:45 AM
Re: Underestimation Joe  I think that to make such statement you should first be knowledgable in what the Apple Watch can do. Otherwise, you are only suspecting and assuming about something you are not familiar with. The Apple Watch is currently the number one selling watch in the world. The Apple Watch is more than a toy, and way more than a super FitBit. And, its underestimated.
Reply | Post Message | MESSAGES LIST | START A BOARD

To be fair, the truly useful and meaningful use cases -- beyond that of "It's also a super-duper FitBit!" -- of the Apple Watch are pretty limited.

That said, a family member of mine extensively uses it in his business because of how it syncs so well with a business app that he relies on.

But most people, I suspect, have it as a toy (and, in many cases, a dust-collecting one).
Reply | Post Message | MESSAGES LIST | START A BOARD

Susan Fourtané 9/14/2017 | 12:52:19 PM
Airpods Airpods do work with the Apple Watch. You dont need to talk at your wrist. :) Just go like everyone else who talks to themselves in the streets today. Thats the new normal.
Reply | Post Message | MESSAGES LIST | START A BOARD

Also, will the Face ID feature get on an iPhone 9?
Reply | Post Message | MESSAGES LIST | START A BOARD

mhhfive 9/14/2017 | 10:45:57 AM
Re: Ha! So do Airpods work with the Apple Watch? I'm a bit curious if that combo would be a nice phone replacement. I'm not sure I want to look like Dick Tracy talking at my wrist when I make a call. (I'd rather look like a crazy person just talking to himself.)