VMware is advancing its hybrid cloud strategy, rolling out tools to help companies operate private managed clouds and strengthening its ties to Amazon Web Services, the company said on Wednesday.

Traditional IT vendors including VMware, Cisco, Dell (which owns 80% of VMware) and Hewlett-Packard Enterprise are threatened by the migration to public cloud, as enterprises that have gone 100% public cloud don't need to buy those companies' products to run on-premises. The vendors have all adopted variations on a hybrid cloud strategy, enabling enterprises to run the vendors' technology on-premises and bridge to public cloud. (See Cisco's 'Network Intuitive': A Risky Transition, AWS & VMware Vs. Cisco & Google: A Cloud Fight Worth Watching and Cisco, HPE, Dell EMC Fighting for Cloud Infrastructure Dominance.) 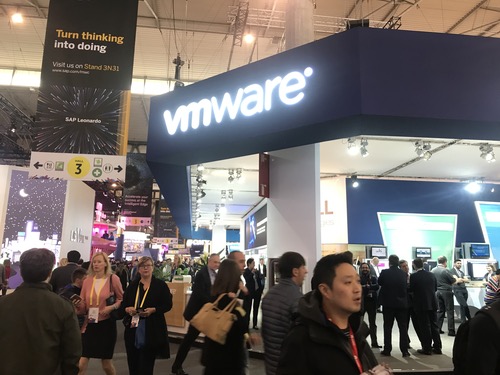 VMware at Mobile World Congress last week.
Want to learn more about network automation? Register today for Light Reading's Automation Everywhere on April 4 in Dallas. We will be tackling the business and technology challenges behind driving network automation. The event is free for communications service providers  don't miss out!

Hybrid Cloud Extension Services allows enterprises to move applications "without modification, with little or no application downtime, and across heterogeneous VMware vSphere environments," the company said in a statement.

VMware introduced log intelligence services, for IT troubleshooting and log management across multiple clouds, including VMware Cloud on AWS. And the company expanded its Cost Insight Service to assess the impact of migrating to VMware Cloud on AWS, adding to existing support for Microsoft Azure and VMware private cloud data centers.

And the company expanded its partner program to support VMware Cloud on AWS.

The hybrid cloud strategy has been successful for VMware, which reported financial results for the fourth quarter and full fiscal year March 1. Revenue for the fourth quarter was $2.31 billion, up 14% year-over-year, and the full year was $7.92 billion, up 12% annually. On a conference call with analysts, CEO Pat Gelsinger cited cloud in general, and the AWS partnership in particular, as growth drivers, as well as mobile, security and networking.

Dell is working on a "reverse-merger" with VMware that would put privately held Dell back on the public market, with a decision more than a month away, CNBC reported last week. (See Dell Confirms Possible IPO or VMware Merger.)

[email protected] 3/15/2018 | 11:43:47 AM
Re: VMware/AWS @Joe competition and collaborations all at once do make strange relationships but its something we are bound to see more of as interoperability in the key to the new wave of technology.


Being an island doesn't work and, in the end, could lead to certain demise as we saw with Microsoft when it refused to change for many years an was quickly overtaken by its competitors.
Reply | Post Message | MESSAGES LIST | START A BOARD

Some day, someone will write some VMware/AWS slashfic, and it will be fantastic.
Reply | Post Message | MESSAGES LIST | START A BOARD

mhhfive 3/7/2018 | 12:44:01 PM
Embrace and make frenemies... Supporting multi-cloud strategies is the only way to go. It allows customers to move not only away from proprietary cloud solutions, but back towards them as needs change. I think we'll see more and more of these hybrid cloud solutions -- and it may just be a matter of time until every cloud offers support for migration and interoperation as a customer service requirement.
Reply | Post Message | MESSAGES LIST | START A BOARD
EDUCATIONAL RESOURCES