For only the second time in 24 years, the United States does not have a supercomputer listed in one of the three spots in the semiannual Top 500 list of the world's most powerful high-performance computers.

The Top 500 list, which was released June 19, shows that China remains the leader in supercomputers, with the number one and number two systems. However, it was the updated supercomputer at the Swiss National Supercomputing Centre (CSCS) that pushed the United States out of the top three.

The US has five machines within the top ten, although the most powerful system, Cray's Titan computer at the Department of Energy's Oak Ridge National Laboratory in Tennessee, now ranks fourth instead of third.

The release of the list on Monday comes as the US Energy Department has awarded millions in grants to six technology companies to build an exascale supercomputer capable of handling a billion billion calculations a second, or one exaFLOPs. Officials hope to have the first system online by 2021 as a way to regain some stature in this field. (See US Energy Department Aims for Exascale.)

Supercomputers and HPC systems are still considered the vanguard of the computing industry, with these machines used for scientific research, as well as issues such as security. However these systems are also being used to expand the fields of artificial intelligence and machine learning, and Cray is now offering access to its technology through the cloud. 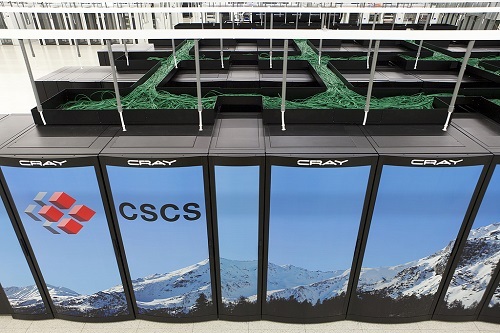 The world's most powerful system remains the Sunway TaihuLight, a supercomputer created by China's National Research Center of Parallel Computer Engineering & Technology (NRCPC). It's currently installed at the National Supercomputing Center in Wuxi, China, and is capable of 93 petaflops.

A petaflop is one quadrillion floating point calculations per second or a million billion.

The second most powerful supercomputer is the Tianhe-2, which is located at the National Supercomputer Center in Guangzho, China. It has the capacity of 33.9 petaflops.

The third system is the Piz Daint in Switzerland. This supercomputer is a Cray XC50 system that was recently upgraded with Nvidia's Tesla P100 graphic processing unit (GPU) chips, which increase its capacity from 9.8 petaflops to 19.6 petaflops, which pushed it into the top three.

The remaining systems with the top ten include:

Cray build four systems with the top ten, while IBM and Fujitsu build two each.