Goerke took the stage for Tuesday's conference keynote wearing a Star Trek uniform, in character as Captain Kirk, on a surprisingly faithful reproduction of the Enterprise bridge set from the 1960s TV show. Other executives, also in costume as Star Trek characters, took the stage to demonstrate new SAP technologies. 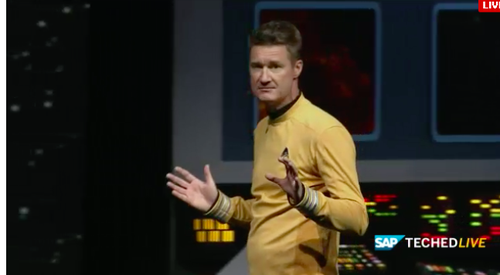 SAP also runs its Cloud Platform in its own data centers, with new ones announced this week in Toronto and Moscow, and expanding into the Amazon Web Services data center in Sao Paolo, planned for 4Q 2017.

SAP extended cloud support to developers who work in the company's legacy ABAP language, launching ABAP in SAP Cloud Platform, allowing ABAP developers to write code that runs in the cloud, with integration into Github.

SAP's software provides platform-as-a-service (PaaS) that runs on either the company's own infrastructure-as a-service or third-party clouds including Amazon, Microsoft, and now Google.

"Our strategy is to go multi-cloud and add value on the PaaS layer," Dan Lahl, SAP product marketing vice president, tells Enterprise Cloud News. "Where we will make our money is where we have always made money, which is the business process layer."

SAP uses Cloud Foundry as the enabling layer to run SAP's PaaS on AWS, Azure and Google, Lahl says. SAP also uses Kubernetes and Docker for portability. "That's why we're supporting open source. Why do we want to develop all that stuff on our own?" he said.

SAP's multi-cloud strategy is in contrast to competitor Oracle Corp. (Nasdaq: ORCL), which runs its own IaaS and PaaS. Last week, Larry Ellison, Oracle chief technology officer, co-founder and chairman, called a last-minute press conference to announce a new "self-driving," automated version of the company's database, available on Oracle's own cloud. Ellison spent much of the press conference talking about how much less expensive Oracle cloud is than AWS. (See Oracle's Ellison: We'll Beat Amazon Cloud Pricing by Half.)

Other SAP competitors include Salesforce.com Inc. and Workday , which provide limited IaaS options compared with SAP.

For an enterprise application company like SAP, it makes sense to be IaaS-agnostic, Josh Greenbaum, an independent enterprise applications analyst, tells Enterprise Cloud News. "The important thing for SAP is they're pushing all three of them" -- AWS, Azure, and Google, Greenbaum says. "Let customer choice define your platform."

Michelle 10/15/2017 | 4:40:04 PM
Re: Cloud agnosticism I've run into that a few times as well. Digital calendars and reminders seem like a good idea, but there are just so many of them...
Reply | Post Message | MESSAGES LIST | START A BOARD

Ariella 10/15/2017 | 11:55:03 AM
Re: Cloud agnosticism @Michelle I like calendar reminders. The only problem I ran into recently was misreading the reminder, thinking it said 10:30 when it really said 10. That only happened to me once, though.
Reply | Post Message | MESSAGES LIST | START A BOARD

kq4ym 10/15/2017 | 11:32:36 AM
Re: pic And probably a great way to get and keep the audience attention as SAP promotes it's strategy, going both against the cloud crowd and toward at the same time. SAP seems to be onto a strategy that should play well into the future.
Reply | Post Message | MESSAGES LIST | START A BOARD

(Personally, I've found that online tool to be a very handy scheduling/reminder hack -- and far more impactful than my usual calendaring/scheduling methods in some instances.)
Reply | Post Message | MESSAGES LIST | START A BOARD

Ariella 9/29/2017 | 9:51:41 AM
Re: pic @Joe it gets rather timey whimey when you have to consider styles set in a show influenced by its own time while trying to show the future.
Reply | Post Message | MESSAGES LIST | START A BOARD

It also reminds me of Apple's "carrier-agnostic" strategy that dates back a few years now -- back in the iPhone 4 days -- back when Cupertino was looking to move beyond AT&T. Apple was effectively able to make the choice-of-carrier conversation obsolete -- and instead make the conversation about choosing an iPhone.

That strategy has impacted the carrier market tremendously. T-Mobile -- as a bit of a discount carrier -- has staked a lot of their marketing on this, such as when they had that promotion offering to buy up people's remaining contracts with competing carriers. Companies like T-Mobile are out there banging the drum that carrier choice doesn't matter -- while Verizon and Sprint are even more loudly banging the opposite drum that carrier choice actually does matter a great deal to convince people who have turned skeptic. (Verizon's actual campaign now is something along the lines of "Better is better." If that's not especially revealing of the state of the market, I don't know what is.)
Reply | Post Message | MESSAGES LIST | START A BOARD
Page 1 / 2   >   >>
EDUCATIONAL RESOURCES