NEW YORK CITY -- The Open Networking User Group or ONUG is looking to rebrand itself a bit in an era of multi-cloud and hybrid cloud, with a greater emphasis on security, analytics and application monitoring.

The change is a significant one for the group, which started out as organization looking to create standards for commodity hardware within the enterprise. In fact, at its fall gathering here on Tuesday, October 17, Nick Lippis, the co-founder and co-chairman, announced that it would now use the acronym ONUG from now on, rather than the full name.

"The reason is that we now have a broader mission about we talk about now," Lippis said during the opening keynote on October 17. "We are an open, all-encompassing group and we want companies to get involved and contribute and learn. The 'N' is still 'N' but it's now for social networking, which is important for us because we want everyone plugged into the ONUG network."

One of the reason for this change is digital transformation. Enterprises need to make sense of a world that uses a combination of different public and private cloud, along with on-premises data centers for certain applications and workloads. (See 'Really Frightening': Monitoring Tools Lag Networking Growth.) 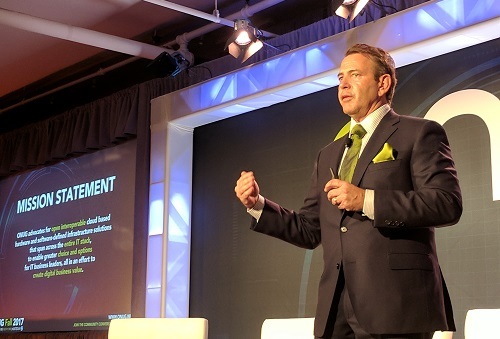 However, digital transformation also brings its own set of problems.

While CIOs see cloud as a cost-effective and efficient way to move toward digital, the IT managers in the field have issues of trust of these platforms, as well as concerns about having the resources -- skills, as well as monetary investments -- to actually complete these transformations.

So, instead of focusing on compute, storage and networking, Lippis wants ONUG to focus on other areas: One being security and the other defined as analytics and application monitoring.

Security, however, was at the top of the list.

"When I look at Equifax, Yahoo, JP Morgan, FedEx and Deloitte and all the many others that have been in the headlines, I see companies with really good IT professionals, so it's not the IT professionals that are causing these breaches," Lippis said. "I think the companies that have been selling security solutions to IT have totally and utterly failed us. I think we need a whole new way to think about security in this industry."

One way to overcome this is more an insurance policy-based approach as opposed to a product-based one, which Lippis called software-defined security.

On the flip side of that is monitoring and analyzing the infrastructure to check for exploits and mitigate those problems. ONUG is working on tools and policies for this as well.

In Lippis' view, ONUG wants to do the same for security and monitoring as the organization did for SD-WAN standards, and create new markets as well. Depending on estimates, the global SD-WAN market is looking to move past at least $1 billion in revenues soon. (See Cloud Pushing SD-WAN Market to $1.6B by 2021 – Report.)

With security, monitoring and analytics in place, ONUG is looking to emphasize the path toward digital transformation.

To hammer that message home, the group heard from GE CIO Jim Fowler, who has been working on the company's years-long transition from a classic manufacturing company to one that is using data to create a new infrastructure based around the Internet of Things.

There's also lots of software, and Fowler expects GE will take orders of up to $5 billion this year.

GE's digital transformation has been well chronicled over the years, although Fowler emphasized that he made the sure the company bosses new about "small wins" throughout this process, so that his team could show progress. He stressed that other enterprises should do this as well. (See GE Keeps the Lights on With IoT.)

The one point where Fowler differed from ONUG was on cloud.

"I'm a public cloud guy," Fowler said. "Maybe I'm not as efficient as everyone else, but I find public cloud cheaper than running one of our data centers."

[email protected] 10/30/2017 | 12:25:13 PM
Re: Wait, what? That's truly the issue with security the leak points are many. Identifying exactly where the breach happened and who is responsible is a major issue.
Reply | Post Message | MESSAGES LIST | START A BOARD

It was, for instance, an attitude I came across in researching and getting quotes for this recent article for ECN's sister site, Security Now: (link)
Reply | Post Message | MESSAGES LIST | START A BOARD

kq4ym 10/26/2017 | 10:54:13 AM
Re: Wait, what? Interesting how the blame for lax security is being shifted, arguing that "companies that have been selling security solutions to IT have totally and utterly failed us." I wonder how that will pan out.
Reply | Post Message | MESSAGES LIST | START A BOARD

Ariella 10/26/2017 | 8:18:07 AM
Re: Wait, what? @Joe you hit on the crux of the issue of how to regard failures that go against expectations here: < If it's truly an experiment, then they have to be prepared to accept a result that goes against their hypothesis.> Some people don't accept that the failure of the experiments disproves the hypothesis and will insist it is still correct, no matter what happens in real life.

Joe Stanganelli 10/26/2017 | 7:39:23 AM
Re: Wait, what? Thanks for the link. Read the article (as insufferable as I find the Globe's paywall more than any other paywall). If it's truly an experiment, then they have to be prepared to accept a result that goes against their hypothesis.

In this case, though, the activist organization was the business owner -- but they had a grander purpose. The pizza shop was a loss leader -- while their grander revenues come in via donations.

Even this negative publicity (if ever there were such a thing) will help them raise donations.

Similarly, bringing this back full circle, ONUG is ensuring that it is getting its fair share of headlines by going where the headlines are -- helping to increase membership among organizations that are interested in these "new" subjects.
Reply | Post Message | MESSAGES LIST | START A BOARD

Ariella 10/25/2017 | 1:39:42 PM
Re: Wait, what? Perfect timing, @Joe to share a story that occurred somewhere near you. http://www.bostonglobe.com/metro/2017/10/24/roxbury-dudley-dough-fair-wage-pizza-shop-close-its-doors/Mes9SKvvaKAHdHX7JHPXDI/story.html#comments

One of the comments on this sums it up as follows:

Small Business Owner - "I have to close my business, I'm not making any $$."

Activist - "I don't think anyone is looking at it as a failure," It's an experiment, and some very good
things came out of that, such as skill-building for staff and being in this building at this time of
gentrification and change in this community."

The only people who view it as a failure are the business owner and the employees, other than that it was a tremendous success!
Reply | Post Message | MESSAGES LIST | START A BOARD
Page 1 / 2   >   >>
EDUCATIONAL RESOURCES