Microsoft's Azure Stack, which looks to bring many of the same features found in the company's public cloud offering to hybrid and private cloud deployments, is creeping a step closer to a full, general release.

At its Inspire event in Washington, D.C. on Monday, Microsoft announced it will start taking orders for Azure Stack. This includes partnerships with three of the largest server vendors in the industry: Lenovo, Hewlett Packard Enterprise and Dell EMC. (See Microsoft, HPE Partner on Azure Stack Expansion.)

Redmond also released its own pricing scheme for Azure Stack.

Although still in technical release, Azure Stack is integral to Microsoft's strategy to dominate the hybrid cloud market, as well as private cloud platforms built on-premises. However, Azure, the public cloud and Azure Stack are closely tied together. 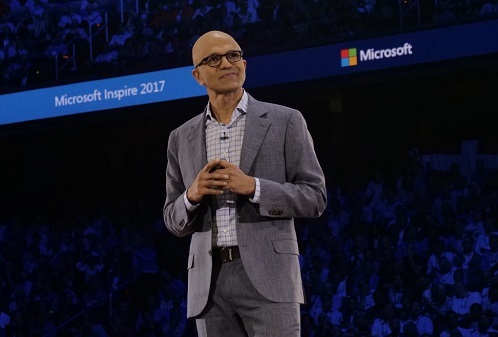 Who among us does not like the cloud?
(Source: Microsoft)

In a July 10 blog post, Mike Neil, corporate vice president for Azure Infrastructure and Management, wrote that "Azure Stack is an extension of Azure," and that it offers many of the same DevOps tools and access to Azure Marketplace to allow enterprises and developers to create applications that can run across different clouds in a hybrid environment.

For example, in edge computing, Microsoft is positioning Azure Stack as a cloud where data can be processed quickly at low latency and then returned as needed. However, if the enterprise wants to conduct a deep big data analysis, the same data can be sent up through the public Azure cloud, and stored and examined there.

The main difference is that while the Azure public cloud remains within Redmond's data centers, Azure Stack is being sold as an appliance. While Dell, HPE and Lenovo are the first out of the gate with it, Cisco and Huawei will add support later this year.

Microsoft is also working with companies such as Rackspace to make Azure Stack a managed service, where companies can buy the technology and let others run it.

There's also a host of ISVs and others to provide additional software such as Red Hat, SUSE, Pivotal Cloud Foundry, Docker and others.

When Azure Stack will be released is still a guessing game. As ZDNet's Mary Jo Foley pointed out, Microsoft originally planned to release it in 2016, but that year came and went without a full release. It's now slated to release sometime in the second half of this year.

The Azure Stack partnership announcements also come a few days after Microsoft reorganized its sales staff to focus more on cloud, as well as technologies such as artificial intelligence. That shift is also likely to cost 3,000 employees their jobs as the company's reorganization continues. (See Microsoft Cutting Jobs in Shift to Cloud.)

mhhfive 7/11/2017 | 3:18:29 PM
Same old Microsoft... I get that Microsoft needs to release something that it can control the quality of, but requiring an "appliance" sounds like a step backwards when other cloud efforts are moving away from specific hardware requirements.

Open source efforts don't seem to really be in Microsoft's DNA yet.. and this slow development towards a tightly controlled platform shows it.
Reply | Post Message | MESSAGES LIST | START A BOARD
EDUCATIONAL RESOURCES