It's been a little more than two years since Lenovo closed on a deal to buy IBM's System x business, and now the company seems poised to capitalize on the acquisition with an eye toward expanding deeper into the data center, as well as the cloud.

At its Transform show in New York City this week, Lenovo rolled out a massive number of new products, including 14 server platforms, seven storage devices, five networking offerings, along with updating its ThinkAgile line with a hyperconverged offering that uses Microsoft's Azure Stack. (See Lenovo Doubles Down on Hyperconverged With Microsoft's Help .)

All of it points to an expanded role in supplying more infrastructure to data centers.

However, the data center is only a start. In his keynote at the show, CEO Yuanqing Yang talked about a "fourth industrial revolution" that includes building on the data center and software-defined infrastructure and expanding into big data and artificial intelligence. 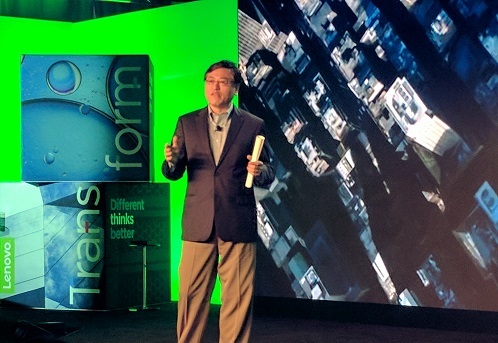 "The fourth revolution is already here," said Yang. "In just the past two or three years, the growth of data and the advancement of artificial intelligence has been astonishing. The computing power can now process the massive amounts of data about your customers, suppliers, partners and competitors that you couldn't imagine before. Artificial intelligence can not only tell you what they want today, but also anticipate what they need tomorrow."

Lenovo has had a data center business before, but it mainly focused in China, where the company was born. That focused helped give Lenovo a natural edge, especially with other customers there such as Alibaba. Now, however, the company is planning to use IBM's x86 server business to expand globally, which puts it in more direct competition with Dell EMC, Hewlett Packard Enterprise and, to an extent, Cisco. (See Dell, HPE, Cisco Top Cloud Infrastructure Market – Analysts .)

Patrick Moorhead, principal analyst at Moor Insights, sees a lot of commoditization within global infrastructure market as companies look to buy more hyperconverged and converged equipment to build out private and hybrid cloud deployments. What makes Lenovo interesting right now is that the company is building much of its own gear and not outsourcing those duties to an original design manufacturer (ODM).

At the same time, the company is facing pressure due to consolidation in the hyperconverged market. Dell EMC owns VMware and HPE has acquired several companies that partnered with Lenovo. (See Meg Whitman: HPE Is Ready to Expand Again.)

It's one reason why Lenovo and Microsoft joined together on ThinkAgile.

"To me they have made their bet," Moorhead told Enterprise Cloud News. "To me, they are going end-to-end rather than ODM and being slightly more sophisticated about it... this partner strategy is on the cutting edge but it's clear to me that all the big players are aligning and I think there's room for one extra big player."

Lenovo's other pitch for the data center is that it has no legacy business to protect, so it's willing to work with customer to build what they need instead of trying to resell gear with good margins.

To help with that, it now has a dedicated sales team that is only selling data center products, said Kirk Skaugen, the president of Lenovo's Data Center Group. He also pointed to the company's five global manufacturing centers, as well as seven data center research facilities.

For enterprises unsure if Lenovo can handle certain workloads, Skaugen noted that SAP is running its own in-house HANA in-line memory database on Lenovo hardware.

While Lenovo might want to sell itself more as a startup than a company that bought a legacy business, it's also showing it can innovate on a high level. At the show, Lenovo gave a glimpse of the supercomputer it constructed for the Barcelona Supercomputing Center called MareNostrum 4, which has the capacity of 11.1 petaflops.

The company now has more than 90 machines listed on the Top 500 supercomputer list and Skaugen said Lenovo harbors dreams of becoming the number one supplier to the high-performance computing (HPC) market. (See US Loses Top Slots in Supercomputing Rankings.)

Charles King, an analyst with Pund-IT Research, told ECN that Lenovo is trying to balance three things: its legacy x86 server business from IBM, the new ThinkAgile developments for hyperconverged and its desire to become a bigger player in HPC. It might take some time before Lenovo ranks with Dell EMC and HPE, but King does see the company making a bigger play into these market sooner rather than later.

Susan Fourtané 6/28/2017 | 11:07:27 AM
Re: Supercomputers Scott -- I had today a teleconference with several scientists working on exascale supercomputer projects in Europe. It seems like they expect these systems to be online by early 2020s. -Susan
Reply | Post Message | MESSAGES LIST | START A BOARD

Scott_Ferguson 6/26/2017 | 7:30:46 AM
Re: Supercomputers @Susan: The US has certainly fell behind in this part of computer science. I'm not sure if the government grants will help but it will be interesting to see when and how these systems come online and will that actually perform as advertised.
Reply | Post Message | MESSAGES LIST | START A BOARD

Susan Fourtané 6/25/2017 | 5:46:54 AM
Re: Supercomputers Scott, yes, super interesting. It will make dramatic changes in AI, machine learning, and everything else. I have been on it lately. I know the US is also working on an Exascale computer, but they don't expect to have the prototype ready before 2023. China's will be ready this year. So it's at least a six-year gap. Thanks for the link. I will check it out. -Susan
Reply | Post Message | MESSAGES LIST | START A BOARD

Scott_Ferguson 6/23/2017 | 9:22:30 AM
Re: Supercomputers @Susan: The exascale stuff is interesting. I know that Japan is building a machine that is supposed to scale to some 130 petaflops and that will be used for AI and machine learning research. Also, the US is trying to catch up as well: http://www.enterprisecloudnews.com/author.asp?section_id=571&doc_id=733803
Reply | Post Message | MESSAGES LIST | START A BOARD

Susan Fourtané 6/23/2017 | 7:15:41 AM
Supercomputers Data and AI are, indeed, are driving faster developments in supercomputing power in order to cover today's needs. China has announced that its Exascale supercomputer prototype will be completed this year. This will be the world's first fully functional Exascale supercomputer. Exascale supercomputers and their applications will be more powerful that the Petascales. Think of calculations of 18 zeros per second, and the massive volumes of data processed. Crazy, isn't it? Lenovo is certainly doing the right thing keeping a foot in the supercomputing space. -Susan
Reply | Post Message | MESSAGES LIST | START A BOARD
EDUCATIONAL RESOURCES