Hewlett Packard Enterprise plans to cut about 10% of its staff, at least 5,000 people, as it looks to trim expenses in the face of mounting competition, according to reports.

The reductions will start before the end of the year, says Bloomberg, citing sources requesting confidentiality. Workers in both the US and abroad, including managers, will be affected. Hewlett Packard Enterprise has about 50,000 workers.

HPE has been shedding business units since 2015, including a big split between the PC and printer business on the one hand, which is now doing business as Hewlett Packard, and, on the other, HPE, which retains the original company's enterprise, cloud and telecoms business.

Chief Financial Officer Tim Stonesifer said on an earnings call this month that the company is looking to save $1.5 billion over three years, Bloomberg noted. On the same call, CEO Meg Whitman said she's looking to make the company more efficient, even as the business sees growing demand.

HPE, along with Cisco and Dell EMC, are the leading suppliers of cloud infrastructure, according to a recent study from Synergy Research Group. HPE leads in storage in particular. (See Cisco, HPE, Dell EMC Fighting for Cloud Infrastructure Dominance.) 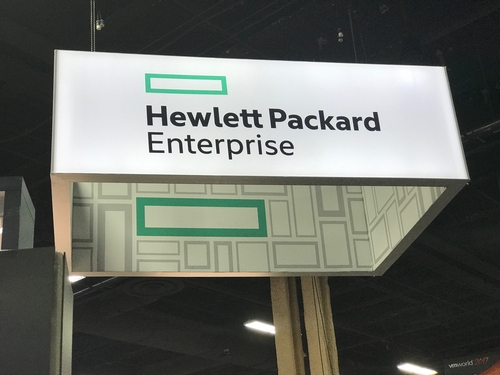 HPE sees the future of the industry, and its own business, as "hybrid IT," where enterprises have a mix of public, private and hybrid clouds, as well as legacy systems, and computing moves out to the "intelligent edge," Whitman said at the company's user conference in June. (See Meg Whitman: HPE Will Live on the Intelligent Edge.)

It also announced plans this month to acquire cloud consultancy Cloud Technology Partners to beef up its expertise in hybrid IT. (See HPE to Acquire Cloud Consulting Business.)

[email protected] 9/22/2017 | 12:44:51 PM
Reinvention HPE is still evolving in a changing market for PCs and printers this year they introduced Printers as a service which I thought was an interesting value proposition. It has worked for me at reducing ink costs and the deliveries have been prompt --implementing these types of innovative ways of doing business can help to save them in the long term. Maybe PC as a service is next?
Reply | Post Message | MESSAGES LIST | START A BOARD

Have to say, it was pretty smart for Dell to go private and embark on the strategy they have. I can't imagine this wasn't without HPE in the company's mind.
Reply | Post Message | MESSAGES LIST | START A BOARD

Joe Stanganelli 9/24/2017 | 4:02:02 PM
Re: Reinvention @daniel: It wasn't even smart so much as it was essential (and, to that end, Michael Dell deserves credit as the driving force behind taking the company private). Publicly traded companies are stymied in innovation and growth because of constantly having to appease investors quarter by quarter -- often at the expense of long-term strategy gains.

Michelle 9/24/2017 | 7:31:26 PM
Future bet Will this plan by HPE turn out to be a reorganization or will they really cut this many jobs? It's always a bit troubling when such a large company cuts so many wokers from its roster.
Reply | Post Message | MESSAGES LIST | START A BOARD

Phil_Britt 9/25/2017 | 8:31:18 PM
Re: Future bet Job cuts a reality thoughout tech companies and other businesses. A lot of tech companies start with plenty of bodies, then cut as the business matures. Wages, healthcare and other benefits continue to become more costly (on a per-worker basis). For many companies, it's much less expensive to pay overtime than to pay for the health and other benefits for an additional worker.
Reply | Post Message | MESSAGES LIST | START A BOARD

Michelle 9/26/2017 | 1:09:15 PM
Re: Future bet Good point about rising costs. I got a modest raise last year and it was gobbled up by increased insurance premiums. Premiums increased again this year. I can see how companies would rather pay overtime than for a whole other person...
Reply | Post Message | MESSAGES LIST | START A BOARD

[email protected] 9/26/2017 | 1:54:58 PM
Re: Future bet The job cuts may also be because a shift in their strategy that impacts their human capital needs and their cost infrastructure until we know more there is no complete way to tell. It's always hard when employees are let go but sometimes its unavoidable.
Reply | Post Message | MESSAGES LIST | START A BOARD

kq4ym 10/9/2017 | 12:25:26 PM
Re: Future bet Cutting 10% of that large workforce is indeed a biig cut, and those affected will certainly be anxious about what's going on. I wonder if during and after the cuts though that lots of outsourcing may take the place for some of those jobs that wlll actually be found a necessity?
Reply | Post Message | MESSAGES LIST | START A BOARD
EDUCATIONAL RESOURCES