Results were good enough to push the company's stock in after-hours trading by about 5%, following the October 17 announcement. 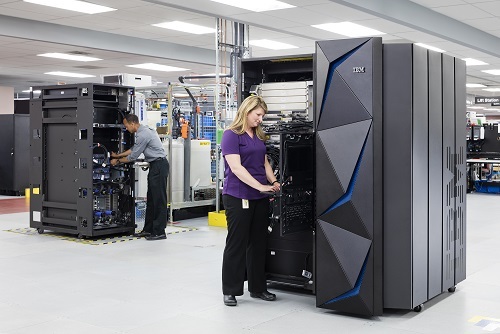 There were several bright spots within the IBM report, including the company's strategic imperatives section, which includes analytics, cloud, mobile and security. For the last 12 months, revenue has totaled $34.9 billion, a 10% increase. Third quarter revenues were up about 11% to about $8.8 billion.

The strategic imperatives section now accounts for about 45% of all IBM revenue.

"In the third quarter we achieved double-digit growth in our strategic imperatives, extended our enterprise cloud leadership, and expanded our cognitive solutions business," CEO Ginni Rometty wrote in the announcement.

Even IBM's legacy systems got into the act during the quarter. The company's systems divisions, which includes System z mainframes and storage, posted revenue of $1.7 billion, a 10% year-over-year increase. Much of this was driven by the release of the z14 System in July. (See IBM Brings Big Iron to the Big Cloud.)

"It's been reinvented for the cloud and cognitive era, including blockchain," Martin Schroeter, IBM's senior vice president and CFO, said of the mainframe during a call with analysts.

The Cognitive Solutions division, which includes the company's investments in artificial intelligence, posted revenues of $4.4 billion, a 4% year-over-year increase. However, the Global Business Services division saw its revenue fall 2% to about $4.1 billion. In addition, the Technology Services & Cloud Platforms division, which includes infrastructure services, technical support services and integration software posted revenues of $8.5 billion, which was a 3% decline.

In an email to clients, Patrick Moorhead, president and principal analyst for Moor Insights & Strategy, noted that IBM's struggles in certain areas reflect bigger issues within the industry, especially with the shift to cloud and new technologies such as AI.

In addition to its quarterly numbers released Tuesday, IBM also noted it expects to deliver earnings per share of $13.80 for the year. Wall Street analysts put that number at $13.75.

[email protected] 10/31/2017 | 11:10:29 PM
Re: Turning Big Blue into more green Philbrit Very true but if they start the turn early enough they can succeed, its companies that don't recognize the need to turn that are facing the greatest issues. Apple was a prime example of turnaround they were all but dead until the iPod, iPhone and revamped laptops. It can be done.
Reply | Post Message | MESSAGES LIST | START A BOARD

[email protected] 10/31/2017 | 10:09:01 AM
Re: Turning Big Blue into more green Susan thanks for the clarification that is a very interesting way of foiling an intrusion attack, is it fully automated or is it a manual effort?
Reply | Post Message | MESSAGES LIST | START A BOARD

Susan Fourtané 10/27/2017 | 11:03:45 PM
Re: Turning Big Blue into more green Maryam, This is the abstract from an IBM Research paper: Passwords are inherently vulnerable to dictionary attacks, but are quite secure if guessing attempts can be slowed down, for example by an online server. If this server gets compromised, however, the attacker can again perform an offline attack. The obvious remedy is to distribute the password verification process over multiple servers, so that the password remains secure as long as no more than a threshold of the servers are compromised. By letting these servers additionally host shares of a strong secret that the user can recover upon entering the cor- rect password, the user can perform further cryptographic tasks using this strong secret as a key, e.g., encrypting data in the cloud. Threshold password-authenticated secret sharing (TPASS) protocols provide exactly this func- tionality, but the two only known schemes by Bagherzandi et al. (CCS 2011) and Camenisch et al. (CCS 2012) leak the password if a user mistakenly executes the protocol with malicious servers. Authenticating to the wrong servers is a common scenario when users are tricked in phishing attacks. We propose the first t-out-of-n TPASS protocol for any n > t that does not suffer from this shortcoming. We prove our protocol secure in the UC frame- work, which for the particular case of password-based protocols offers important advantages over property-based definitions, e.g., by correctly modeling typos in password attempts.
Reply | Post Message | MESSAGES LIST | START A BOARD

Phil_Britt 10/27/2017 | 9:22:31 AM
Re: Turning Big Blue into more green Though IBM has the resources, as you point out, the downturn has been anything but short-term. It takes a long time to turn around a big ship.
Reply | Post Message | MESSAGES LIST | START A BOARD

kq4ym 10/26/2017 | 10:47:37 AM
Re: Turning Big Blue into more green While it's always hard to predict the future, IBM has the resources I would guess to recover from any temporary downturns while searching for ways to improve the bottom line among it's numerous business opportunities including moving along with the cloud transitions.
Reply | Post Message | MESSAGES LIST | START A BOARD

[email protected] 10/20/2017 | 2:00:11 PM
Re: Turning Big Blue into more green Susan agreed their moving in the right direction so if the focus continues they could very well claim a share of the market.
Reply | Post Message | MESSAGES LIST | START A BOARD

Susan Fourtané 10/19/2017 | 6:48:58 PM
Re: Turning Big Blue into more green It seems like its a time for transition for IBM as it moves into new technologies such as Blockchain. This is going to be interesting to watch, both the evolution into new technologies and what I believe it will be a financial recovery.
Reply | Post Message | MESSAGES LIST | START A BOARD
Page 1 / 2   >   >>
EDUCATIONAL RESOURCES