IBM Is Losing the Cloud Race

To a casual observer, the cloud is a bright spot in IBM's otherwise gloomy quarterly results, announced Tuesday.

It would be -- except the market as a whole is growing much faster; 50% year-over-year in the second quarter, according to a July report by Synergy Research. That's similar to the first quarter growth rate, and "comfortably higher" than 2017, the researchers said. And Microsoft, Google and Alibaba "far surpassed" the overall market. (See Amazon Still Dominates Cloud Market, Bigger Than Next Four Competitors Combined.)

IBM Corp. (NYSE: IBM) is driving a sportscar, but it's losing the race, because its competition is riding rockets. 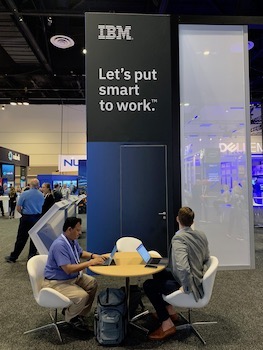 IBM at Microsoft Ignite last month.
Now entering its fifth year, the 2020 Vision Executive Summit is an exclusive meeting of global CSP executives focused on navigating the disruptive forces at work in telecom today. Join us in Lisbon on December 4-6 to meet with fellow experts as we define the future of next-gen communications and how to make it profitable.

IBM's overall financial news was unhappy even to a casual observer. Overall revenue was $18.8 billion, down 2%. That's the end of three consecutive quarters of revenue growth, and a return to a five-year decline that preceded those quarters.

Still, the cloud race is far from over. As James Kavanaugh, IBM senior vice president and CFO noted in Tuesday's earnings call, "enterprises are only 10% to 20% into their cloud journey." Organizations need a partner that can offer hybrid cloud, security and an open platform, which IBM can provide.

Of IBM's cloud revenue, $8.1 billion over the last 12 months came from hardware, software and services to enable IBM customers to implement hybrid cloud solutions with $10.9 billion as-a-service revenue. The annual exit run rate for as-a-service revenue increased in the quarter to $11.4 billion, up 21%, IBM says.

The business area that IBM calls "strategic imperatives," including hybrid cloud, AI, security and digital, grew 13% to $39.5 billion over the last 12 months -- near the $40 billion target IBM set more than three years ago, Kavanaugh noted.

Kavanaugh emphasized the positive on the earnings call. He said IBM "had a solid quarter," with $18.8 billion revenue consistent with guidance even in light of strengthening US dollar, which works against the company.

Moreover, IBM has "taken the actions to re-position our business entering 2018 and you see that play out as we enter the second half," Kavanaugh said, with strong demand in "key high value segments" -- the strategic imperatives, which are roughly half IBM's business, up from less than 25% three years ago. "That's a massive transformation over a period of time -- and that's led to significant improvement in our trajectory of revenue growth," Kavanaugh said.

He added, "Obviously, we've still got a lot to do."

Atlantis-dude 10/18/2018 | 7:48:05 PM
which segment is ibm loosing in the cloud? fed, large entrprise? or is it due to the non-availability of IBM cloud solution developers?
Reply | Post Message | MESSAGES LIST | START A BOARD

DHagar 10/18/2018 | 5:49:12 PM
IBM Not Yet in the Clouds! Excellent analysis!  As you point our IBM needs something to get off the ground - from their racecar - and get up in the clouds - like a rocket.  They need to innovate further on offerings of their technology to create the markets and compete in the opportunities with the cloud race - not just sell to the racecar drivers.

This is a tall order but one IBM needs to learn in transitioning their technology into the competitive user space.
Reply | Post Message | MESSAGES LIST | START A BOARD
EDUCATIONAL RESOURCES