Oracle reported a mix of good news and bad news for quarterly earnings Monday. The bad news is that Oracle's revenue and overall cloud growth is nearly flat, despite a booming cloud market.

The good news, the company says, is that its application growth is "spectacular," and it's got the pieces in place for its cloud database to revenue to take off in the coming year. And cloud applications -- particularly cloud Enterprise Resource Planning (ERP) -- and the cloud-based Autonomous Database are strategic to the future of the company, Larry Ellison, Oracle Corp. (Nasdaq: ORCL) chairman, CTO and co-founder, said Monday on the company's quarterly earnings call.

Oracle reported $9.6 billion in revenue for the quarter ending November 30, unchanged from the year-ago quarter. Total cloud services and license support, plus cloud license and on-premise license revenues were up 1% to $7.9 billion -- in a market where infrastructure cloud grew at 45%, according to the latest estimates from Synergy Research. (See Oracle Reports Q2 2019 Revenues $9.6B  Flat Year-Over-Year and Cloud Spending Growth Slows, While Big Providers Squeeze Little Guys Even Harder.)

Oracle crowed about its earnings-per-share growth -- up 19% in constant currency, Oracle co-CEO Safra Catz said in a statement. The company declared a quarterly cash dividend of $0.19 per share. Non-GAAP earnings per share was up 16% to $0.80. 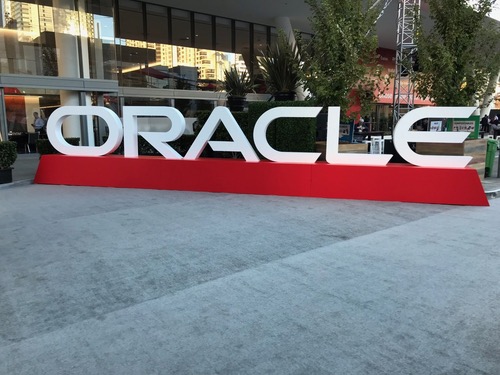 Cloud applications is where the good news comes in. Oracle's two cloud ERP businesses, Fusion ERP and NetSuite ERP, grew at a combined rate of 32%, Oracle co-CEO Mark Hurd said in a statement.

"Solid quarter for us top to bottom," Hurd said on the earnings call. "Apps had a spectacular quarter." The entire apps ecosystem grew 7%, to more than $11 billion for the trailing 12 months, with 91% of that recurring revenue. "We continue to grow faster than the market, with an enormous opportunity ahead of us, particularly in ERP as well as [Human Capital Management] HCM."

"The strength of our bookings growth along with climbing revenue rates gives me confidence that our cloud apps business is only -- only! -- going to strengthen from here," Hurd said (emphasis his). "If I'm not being clear, this is perhaps the best apps quarter we had, just in terms of breadth of bookings across the portfolio."

Oracle's database cloud growth has been held back by the need to run on a "first-class cloud infrastructure," Ellison said. "We finally have that now with our Generation 2 cloud, and you'll see rapid migration from on-prem to Oracle Public Cloud and Oracle Cloud at Customer."

And of course Ellison used the earnings call soapbox to trash Amazon Web Services Inc. . He can't miss an opportunity for that. (See Oracle's Ellison: No 'Normal Person' Would Move From Us to Amazon.)