After several quarters of less-than-stellar results, Cisco managed to beat analysts' expectations with a better-than-expected report for its first quarter of fiscal 2018.

Non-GAAP net income stood at $3 billion, a 2% year-over-year decline, and non-GAAP earnings per share came in at $0.61, according to the company's first quarter financial report released November 15.

Cisco Systems Inc. (Nasdaq: CSCO) managed to beat Wall Street expectation by a penny, giving the company something to crow about and pushing its stock up about 4% in after-hours trading. But Wednesday's report marked the eighth consecutive quarter in which Cisco's year-over-year revenues declined. 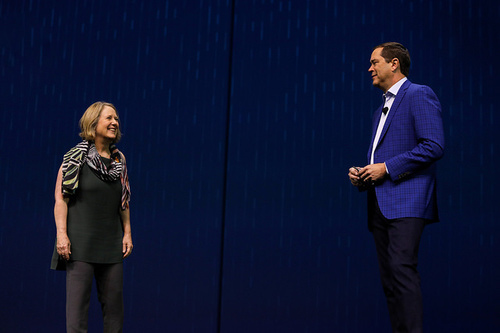 "Our results in Q1 demonstrate the continued progress we're making on our strategy," CEO Chuck Robbins wrote in a statement. "The network has never been more critical to business success. Cisco is delivering more insights and intelligence as we help our customers build highly secure, intelligent platforms for digital business."

Before Wednesday's announcement, Wall Street analysts were calling for $0.60 in earnings per share and $12.1 billion in revenue, according to Thompson Reuters. During the same quarter a year ago, Cisco reported earnings per share of $0.61 on revenue of $12.4 billion.

During these last two years of financial hardship, Cisco has been looking to transform itself from a company that dominated the market for networking gear and hardware to one that is focused on cloud computing, machine learning, intuitive networks, application performance, the Internet of Things and security. (See Cisco's ACI Could Close the Cloud, SDN Gap.)

During his call with analysts, Robbins noted that the company's recent partnership with Google (Nasdaq: GOOG) is the latest example of the company's new focus on these priorities. (See Google Teams With Cisco for Hybrid Cloud.)

In its first quarter financial report, Cisco also reorganized its product revenues into four categories: Infrastructure Platforms, Applications, Security and Other Products. These reflect the company's shift to report revenues from recurring and subscription models.

For the quarter, Infrastructure Platforms had revenues of $6.97 billion, a 4% decline. In his report, Robbins noted that the network intuitive platform now has 1,100 customers. During the last report, the number of customer numbered about 200. (See Cisco Revenue Decline Continues Into Q4.)

The Applications category posted revenue of $1.2 billion, a 6% increase. The Security division had revenues of $585 million, an 8% increase, while the Other Products category declined 16% year-over-year with revenue of $296 million.

Services, a category separate from the four product groupings, had revenues of $3.1 billion, a 1% year-over-year increase.

During Wednesday's presentation, Robbins noted that many of the hyper-scale and web-scale companies are continuing to revamp their infrastructures and Cisco is trying to work with these types of customers to meet their needs. He noted that deals with Google and Microsoft reflect that outlook. (See Cisco & Microsoft Are Collaborating: Arista Should Be Worried.)

"They have made major architectural decisions and have franchises, we're trying to re-enter, but if you look at the announcements we have made with Microsoft a couple of quarters ago or the announcement with Google... we continue to make progress on what we talked about over the last year-and-a-half, which is trying to go deeper," Robbins said, adding that edge computing is going to mission critical for these customers going forward.

Phil_Britt 11/24/2017 | 1:18:41 PM
Re: Turning the ship Don't know how much of this is Cisco and how much is the entire market (especially tech) going up. A rising tide lifts all boats. When market corrects, it will be interesting to see if Cisco stays with the market or stays ahead of the correction.
Reply | Post Message | MESSAGES LIST | START A BOARD

[email protected] 11/17/2017 | 1:48:45 PM
Turning the ship Cisco finally appears to be turning the ship! Many had written off Cisco when it couldn't adapt to the new technology infrastructure and their stock tanked. It's good to see they didn't let that stop them from retoolinging and reinventing themselves lets hope they can continue to carve out space in the market that they can lead in.
Reply | Post Message | MESSAGES LIST | START A BOARD
EDUCATIONAL RESOURCES