The release of the semiannual Top 500 Supercomputer List is a chance to gauge the who's who of countries that are pushing the boundaries of high-performance computing. The most recent list, released Monday, shows that China is now in a class by itself.

China now claims 202 systems within the Top 500, while the United States -- once the dominant player -- tumbles to second place with 143 systems represented on the list.

The growth of China and the decline of the United States within the Top 500 has prompted the US Department of Energy to doll out $258 million in grants to several tech companies to develop exascale systems, the next great leap in HPC. These systems can handle a billion billion calculations a second, or 1 exaflop. (See US Energy Department Aims for Exascale.)

However, even as these physical machines grow more and more powerful, a good portion of supercomputing power is moving to the cloud, where it can be accessed by more researchers and scientists, making the technology more democratic. Cray Inc. (Nasdaq: CRAY) and Microsoft recently announced a partnership to deliver HPC resources through the Azure cloud. (See Microsoft, Cray Bringing Supercomputer Power to Azure.) 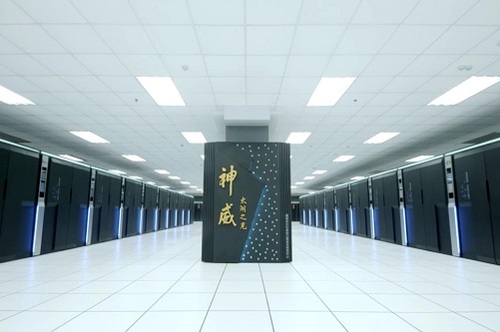 In terms of the most powerful supercomputing systems, the Top 500 List hasn't changed much since the first 2017 version was released in June. (See US Loses Top Slots in Supercomputing Rankings.)

One petaflop is one quadrillion (1 million billion, or 1015) floating point calculations per second.

The Sunway TaihuLight is currently installed at the National Supercomputing Center in Wuxi, China

The second most powerful system is also located in China. The Tianhe-2, which is based at the National Supercomputer Center in Guangzho, has capacity of 33.9 petaflops.

Third place belongs to the Piz Daint in Switzerland, which is a Cray XC50 system that used Nvidia's Tesla P100 graphic processing unit (GPU) chips. It has a capacity of 9.6 petaflops. The fourth most power supercomputer is Japan's Gyoukou system, which is deployed at Agency for Marine-Earth Science and Technology -- home of the Earth Simulator. Gyoukou clocks in at 19.14 petaflops.

In fifth place is Titan, a Cray supercomputer located at the US Department of Energy's Oak Ridge National Laboratory in Tennessee. The system fell from fourth to fifth place in the new rankings with a performance of 17.59 petaflops.

Despite its overall drop, the US still has three other systems listed within the top ten, including two more built by Cray and one designed by IBM. Japan also has two additional systems within the top ten. Overall, Hewlett Packard Enterprise has installed the most systems on the Top 500 List, with 122 supercomputers and HPC systems attached to the company.

kq4ym 11/27/2017 | 7:54:48 AM
Re: Who "owns" the supercomputer..? Yes, not only can the rankings come under some criticism, but how cloud computing and eventually quantum may affect it all will be interesting to project. I wonder too about why and how Switzerland is using theirs, as it's in second place. Seems a little odd competing with the richer and larger nations.
Reply | Post Message | MESSAGES LIST | START A BOARD

mhhfive 11/13/2017 | 2:04:07 PM
Who "owns" the supercomputer..? I vaguely remember seeing a critique of this annual list, saying something along the lines that nearly all of the processors were designed by American or Western countries (although the chips may be manufactured in Asian countries). So assigning the "ownership" of the top supercomputers may be a bit more complicated than it seems. China has been working on its own supercomputer chip designs so that it's not beholden to Western chip intellectual property, but it'll be quite some time before China's chip designs take away a significant marketshare. (at least the last time I looked..)

Scott_Ferguson 11/13/2017 | 1:51:56 PM
Re: Metal Versus Cloud @danielcawrey: Thanks for pointing that out. It's why I included this paragraph in the story: However, even as these physical machines grow more and more powerful, a good portion of supercomputing power is moving to the cloud, where it can be accessed by more researchers and scientists, making the technology more democratic. Cray Inc. (Nasdaq: CRAY) andMicrosoft recently announced a partnership to deliver HPC resources through the Azure cloud.
Reply | Post Message | MESSAGES LIST | START A BOARD

danielcawrey 11/13/2017 | 1:47:25 PM
Metal Versus Cloud Let's not get too caught up in a machine-by-machine race. The cloud will take over supercomputing, it's an inevitable fact.
Reply | Post Message | MESSAGES LIST | START A BOARD
EDUCATIONAL RESOURCES