Amazon Web Services is getting into the on-premises hardware business, with an assist from VMware.

The two companies brought their partnership full circle on Wednesday: After partnering on technology to bring VMware virtualization software to the AWS public cloud last year, they're now joining up to introduce "Outposts," hardware that brings the AWS cloud on-premises.

Users can choose to run either VMware private cloud software on Outposts, or use the native AWS APIs. Either way, users get a uniform experience bridging the public and private cloud, the vendors say.

The Amazon Web Services Inc. -VMware Inc. (NYSE: VMW) partnership is designed to help enterprises that have been slow moving to the public cloud, AWS CEO Andy Jassy said at a Wednesday keynote at the AWS re:Invent partner conference. "The longer they wait, the deeper the ditch gets," he said. (See AWS Launches 'Outposts' To Bring Its Cloud Infrastructure On-Prem.)

Some workloads will live on-premises for a long time -- for example, factory automation applications requiring low latency. AWS Outposts gives enterprises the ability to run compute and storage on-premises, while interacting seamlessly with AWS applications and services. "Customers order racks that have the same hardware that AWS is running on our regions," Jassy said. 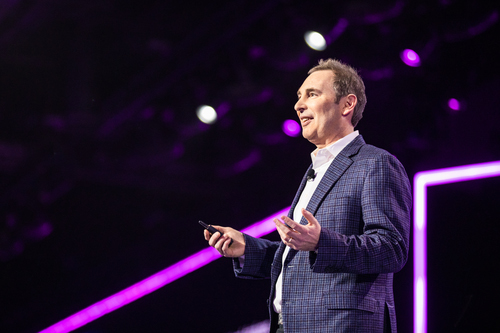 AWS's Jassy. (Photo by AWS.)
Now entering its fifth year, the 2020 Vision Executive Summit is an exclusive meeting of global CSP executives focused on navigating the disruptive forces at work in telecom today. Join us in Lisbon on December 4-6 to meet with fellow experts as we define the future of next-gen communications and how to make it profitable.

AWS Outposts are in private preview, with public general availability in the second half of 2019, AWS says.

Outposts is not AWS' first foray into the private cloud. It previously offered "Snowball Edge," a hardware device running AWS software, ruggedized for harsh conditions -- such as factory floor -- and optimized for compute.