AWS Drives More Than Half of Amazon's Operating Income

For Amazon, the cloud is the little engine that could. Amazon Web Services comprised just 11% of the company's overall sales in 2018, but delivered more operating income than all other business units combined.

Operating income for AWS was $2.17 billion, up from $1.35 billion in the year-ago quarter. 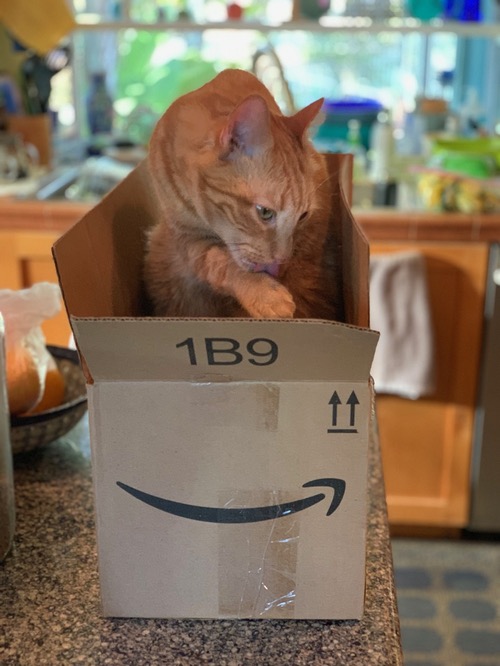 Amazon is cleaning up in the cloud, much as the author's cat cleans itself in this Amazon box.

For AWS's sales growth to accelerate in that fashion is noteworthy because AWS is by far the leader in cloud market share, ahead of second-ranked Microsoft Corp. (Nasdaq: MSFT) by a wide margin; accelerating growth speaks to overall strength for AWS and the cloud market in general.

And AWS is the lion's share of Amazon's operating income: Nearly 58% in the fourth quarter of 2018, and nearly 59% for the full year.

For Amazon overall, including its mainstay retail business, for the quarter, sales were up 20% to $72.4 billion after a strong holiday season. Net income increased to $3 billion in the fourth quarter, or $6.04 per diluted share, compared with $1.9 billion or $3.75 per diluted share in the year-ago quarter.

The Echo Dot was the best-selling item across all products on Amazon globally, Amazon CEO Jeff Bezos said in its earnings press release. "Alexa was very busy during her holiday season," he said.

Amazon is the second major US cloud provider to report quarterly earnings this month. Microsoft reported that Azure revenues rose 76% Wednesday -- not an apples-to-apples comparison with AWS, as Microsoft breaks out its cloud finances in multiple pieces and reports those pieces mixed in with other business units. (See Microsoft Azure Revenues Climb 76%.)

I can't really say that I'm surprised. It seems like cloud-based solutions has been on the rise for a few years now, and it's understandable why; cost-efficiency, security, scalability and so one. It's pretty much something that companies of all sizes can benefit from!

...and of cause Amazon would be the ones to dominate it.

Not having to run a big server farm yourself is a big bonus for a lot of smaller companies - like our own. We don't have the capacity to have our own servers, and cloud - like AWS - is the way to go for us.