Liberty Mutual Aspires to Be 'Software Company That Sells Insurance'

Liberty Mutual, a 100-year-old insurance company, is jumping into the cloud, leveraging Cloud Foundry and agile methodologies to transform the technology it uses to deliver software and services to customers and employees.

The problem Liberty Mutual faces is familiar to any enterprise: Developing solutions took too long. Prior to making the transition to the cloud, the company needed months to spec a solution, then a year or more to develop it and bring it back. By that time, the solution wasn't what the users needed, Mojgan Lefebvre, Liberty Mutual senior vice president and CIO for global speciality, said. Lefebvre delivered a keynote presentation at Cloud Foundry Summit in Santa Clara, Calif., last week.

"Most of the time [development] took longer, was more expensive and didn't really do what they thought they were getting," Lefebvre said. 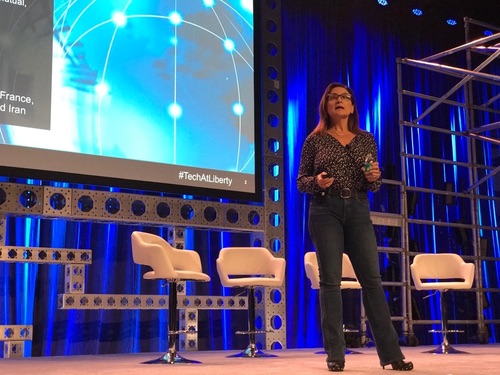 Customers and users demand more. They're also doing business with Amazon, Airbnb and other cloud businesses, and expect that standard of ease of use and responsiveness from enterprise IT, Lefebvre said.

She echoed a statement by tech investor and Internet pioneer Marc Andreessen, who said, "Software is eating the world." That's certainly true in the insurance market, where competitors such as Lemonade let consumers transact business on their phone in minutes, she said.

"We know that we, too, have to become a software company that sells insurance," Lefebvre said.

As part of transforming IT to meet business needs, Liberty Mutual has several aspirational goals: 60% of workload operating in public cloud, 50% of apps releasing code to production daily and 75% of staff writing code, she said.

As of now, only 5% to 10% of the workload is in the cloud, and at most 50% of the staff writes code, with others doing documentation, requirements gathering, project management and operations, Lefebvre said.

To achieve change, Liberty Mutual adopted a "transform by doing" strategy, she said. Building on the cloud became the default, she said.

For example, Liberty Mutual's Australian business wanted to launch into the Australian accident and health market, a potential $240 million opportunity. That business looked to IT to build an end-to-end underwriting portal for independent brokers, with only six months to spec out the problem and build it, Lefebvre said.

First, Liberty Mutual looked at vendor solutions. "The brokers hated everything that's out there," she said. Vendor solutions would have required longer than six months and too much expense.

Liberty Mutual worked with Cloud Foundry vendors Pivotal Software in Sydney, Australia, to coordinate with brokers on their needs. "This was the first time our developers were directly talking to end customers. I can tell the energy they got from that is phenomenal," she said.

Working with Pivotal, Liberty Mutual had a working prototype in four months, working with feedback from internal underwriters and friendly brokers, Lefebvre said. Within six months, the portal was ready to go to brokers.

The portal proved successful, receiving 200 quotes and added 60 policies to the system within its first month of operations, she said.

"With every opportunity that came our way, we would build it on the cloud unless we proved somehow we could not do that. And we have yet to encounter that situation, Lefebvre said.

Phil_Britt 6/27/2017 | 10:58:20 AM
Re: Liberty Too often, the insurance companies see the customers as commodities. Any support offered by call center reps paid just above minimum wage and who are pressured to get calls done quickly. And the companies quit cutting back on the number of people dedicated to support.
Reply | Post Message | MESSAGES LIST | START A BOARD

kq4ym 6/27/2017 | 10:04:25 AM
Re: Liberty Dealing with insurance companies is never an easy task for me. With yearly increases a standard, consumer experts recommend shopping prices every few years. But, that's easier said than done. Using some of the online insurance shopping sites, I find that you can't really get an accurate price, and end up calling and spending some time with their reps. And even then it's not easy to get a "best" price without all the extras they'll try to sell you. If only the online site were a bit better designed for ease of use and completeness that would be a boon to customers.
Reply | Post Message | MESSAGES LIST | START A BOARD

Thanks for the advice, but home and our autos with another company that doesn't write policies in her state (she's in Fla., us in Ill.). She's already through college. when all policies renew next year, it might be worth considering Liberty, Geico, State Farm or another national firm.

Ariella 6/26/2017 | 10:03:45 AM
Re: Liberty @PhilBritt, sure, insurance is not one-size-fits-all. If she has a college affiliation, ask if there's a discount for that. Liberty game me one for mine. I also do save a bit more for combining home and car policies, which likely does not apply for your daughter.
Reply | Post Message | MESSAGES LIST | START A BOARD

Roadside assistance will be a consideration, though I may be able to include her on our motoring club policy for that. The initial quote came back far too high, but I can do a couple of things to attempt to lower it, and still need to price/service compare against national providers and vs. what independent agents might be able to offer.
Reply | Post Message | MESSAGES LIST | START A BOARD

Ariella 6/26/2017 | 9:47:38 AM
Re: Liberty @PhilBritt You can include roadside assistance. I've had to use it a couple of times when I couldn't get my car to start, but it takes a very long time to get there.
Reply | Post Message | MESSAGES LIST | START A BOARD

Michelle 6/25/2017 | 4:40:45 PM
Re: Liberty @Ariella Sometimes the price makes all the difference...I guess you finally got your issue handled after multiple phone calls.
Reply | Post Message | MESSAGES LIST | START A BOARD

Phil_Britt 6/25/2017 | 12:06:58 PM
Re: Liberty I am looking into Liberty for a daughter who lives in a different locale, so including her on our policy not an option. While price certainly a prime consideration, responsiveness to important issues such a being locked out, a car not running or an accident is more important than price alone. That's why insurance companies need satisfied customers who post reviews to help convince those choosing a policy for the first time or those who are looking to switch.
Reply | Post Message | MESSAGES LIST | START A BOARD

Ariella 6/22/2017 | 5:33:58 PM
Re: Liberty @Mitch I agree 100%. I was so put off by having to call 3 different times for the same thing that I was ready to switch. That's when I got the prices quotes and ascertained that Liberty was offering the best rate in my area.
Reply | Post Message | MESSAGES LIST | START A BOARD