IBM's Rometty: 'You Have to Get Comfortable With Being Uncomfortable'

IBM CEO Ginni Rometty credited her mother, grandmother, and great-grandmother for building a foundation for her professional success. And the company's century-plus record of diversity and inclusion was also a big help, the IBM boss said.

Rometty spoke in an on-stage conversation billed as a "fireside chat" with Salesforce CEO Marc Benioff at the Salesforce.com Inc. Dreamforce conference in San Francisco this month. Benioff asked the IBM Corp. (NYSE: IBM) boss why she thought some people succeed and some "drop off."

Rometty replied by quoting former Texas Governor Ann Richards: "It's passion and perseverance when anyone else would have given up." She also quoted Thomas Edison: "Many of life's failures are people who gave up right before they would have become successful."

Successful people need to be "passionate," she said, which is why she switched from the auto industry at the start of her career, to tech. 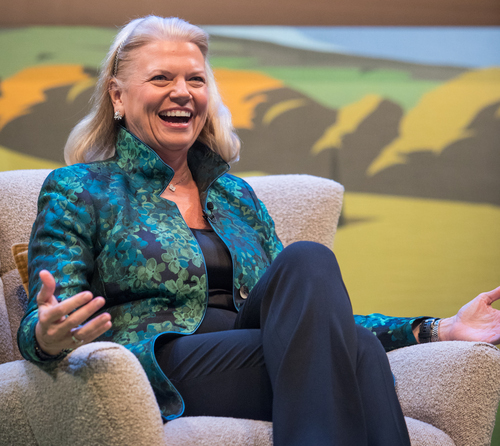 IBM CEO Ginni Rometty. Photo by Salesforce.
Keep up with the latest enterprise cloud news and insights. Sign up for the weekly Enterprise Cloud News newsletter.

"Growth and comfort -- they will never coexist. You have to get comfortable with being uncomfortable," she said.

Benioff and Rometty spoke for less than an hour, but they covered a lot of ground. They talked about how to keep a century-old company innovative and successful, as well as the cloud and artificial intelligence. Read about that here: IBM CEO Ginni Rometty: Darn Agile for a 106-Year-Old.

Rometty said the preceding three generations of women in her family set examples for her.

"That passion comes from my mother, my grandmother, my great grandmother," Rometty said. "I had wonderful women in my life. My great-grandmother came from Russia and she was a cleaning lady at the Wrigley Building in Chicago.

"Every year for Christmas we got gum. I still have a little tin," Rometty said, adding, "She worked like a god so we could have something."

"I don't know how many of you had your prom dresses sewed by your grandmother," Rometty asked the Dreamforce audience. Rometty's grandmother taught Rometty how to sew.

Rometty's mother "had a very happy ending." She went on to become administrator at Rush Presbyterian in Chicago, at the sleep clinic.

"Not that I sleep much," Rometty said. Her brothers and sisters are also successful, which comes from Rometty's mother's example, the IBM CEO said.

kq4ym 11/30/2017 | 8:27:13 AM
Re: Comfortable with Discomfort While Rometty's career is indeed impressive and her advice on persistence and hard work is most likely valid, I'm a bit skeptical of advising that "You have to get comfortable with being uncomfortable," as a general addage for success in business. For many, if taken to the extreme, that may likely lead to a pretty stressful life, and diminish results if taking a bit more balanced psychology. Although some strees is motivating and usefull, too much or too little may be what to watch out for.
Reply | Post Message | MESSAGES LIST | START A BOARD

Ariella 11/21/2017 | 1:30:27 PM
Re: Comfortable with Discomfort @Kelsey that would be the "no pain, no gain" view of exercise, I suppose. Without believing in that, no one would ever do planks.
Reply | Post Message | MESSAGES LIST | START A BOARD

At the same time, many pundits/critics frequently note that AI often bears the bias of its creators. (Though this may not necessarily/always be the case when it comes to some self-learning AI, I tend to think -- although even this is debatable.) Was there further discussion on this point? What is the "interaction level" like with Watson to check and balance both human and AI biases?
Reply | Post Message | MESSAGES LIST | START A BOARD

Joe Stanganelli 11/21/2017 | 1:19:38 PM
Re: title @Ariella: In the context of the quote it comes from (i.e., where she discusses "Growth and comfort"), it seems to be the latter -- specifically, more about the idea of getting used to constantly pushing yourself to unfamiliar territory.

Put another way, I suppose: If you're comfortable, you're doing something wrong. (Or, at least, not being your best self -- both as an organization and as an individual.)
Reply | Post Message | MESSAGES LIST | START A BOARD

Kelsey Ziser 11/20/2017 | 4:32:18 PM
Comfortable with Discomfort I had to chuckle because "get comfortable with being uncomfortable" is also what Jillian Michaels says in her Yoga Meltdown DVD...not that I own that or anything ;) It's good advice, though, that applies to both fitness and in Rometty's case, to furthering your career.

Ariella 11/20/2017 | 3:45:11 PM
title Is that like "expect the unexpected" or be aware of the "unknown unknowns" or is it just the general idea that businesses can't sit and be complacent?
Reply | Post Message | MESSAGES LIST | START A BOARD
EDUCATIONAL RESOURCES
sponsor supplied content
IDC Whitepaper: Key Considerations When Operationalizing Artificial Intelligence Strategy
Design Guide: best-in-class hybrid IT infrastructure with AWS Outposts
Blueprint: optimize data exchange with AWS Outposts
Ericssons Cloud RAN e-book: A comprehensive guide to adopting, deploying, and scaling virtualized 5G in your networks
The Four Key Components of Cloud RAN
How to get the most out of 5G mid-band in Cloud RAN
QCT Introduces New Innovative Family of Edge Servers for the Telco Marketplace.
TOOL - Interactive Experience: Learn how to Evolve your Architecture and Monetize Next Generation Metro and Edge Networks
Whitepaper  Achieving IP/Optical Convergence: Building from Existing Networks
Executive Guide  Enabling Next-Generation Metro and Edge Networks for Communications Service Providers
Educational Resources Archive
More Blogs from Wagners Ring
Podcast: Don't Call Us an SD-WAN Provider  Cato Networks