SAN FRANCISCO -- Salesforce Dreamforce -- When IBM was founded in 1911, punch cards were hot new technology. How does a company that old stay on top of emerging technology such as the cloud, artificial intelligence, quantum computing and blockchain?

"You have to be willing to change everything about yourself but your core values," IBM Corp. (NYSE: IBM) CEO Ginni Rometty said in an on-stage conversation with Salesforce.com Inc. CEO Marc Benioff here this week. That's the real key to successful digital transformation.

She summed up IBM's core values in a few principles: "Dedication to every client's success, innovation that matters for ourselves and the world, and trust and responsibility in all our relationships."

Benioff and Rometty talked for about an hour about the role of emerging technology such as artificial intelligence in shaping business and the the workplace, as well as Rometty's own career and IBM's history of championing diversity. 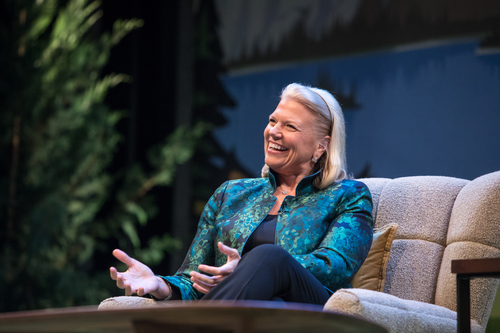 IBM's Ginni Rometty. Photo by Salesforce
Keep up with the latest enterprise cloud news and insights. Sign up for the weekly Enterprise Cloud News newsletter.

It was a relaxed and positive conversation between two friends. Benioff described Rometty as "the top female CEO in the world."

Not mentioned: Revenues at IBM have declined 22 consecutive quarters, with the company posting non-GAAP revenue of $19.2 billion in its most recent quarter. Cloud revenue grew annually to $15.8 billion, but that wasn't enough to push overall revenue up. The company's "strategic imperatives" businesses, including analytics, cloud, mobility and security saw $34.9 billion revenue over the trailing 12 months, up 10%. (See IBM's Long Decline Continues, Despite Cloud Growth.)

Benioff noted that Rometty has been at IBM 36 years, and asked whether she expected to be CEO when she started.

"Of course not," Rometty said. "Did you think you were going to run Salesforce?"

"I did when I started it," Benioff said, which got a big laugh from the audience. (It was the timing. The line doesn't read as funny as it sounded.)

Rometty said she started working at an auto company ("a good one," she said, when asked to name it; in response to which Benioff noted that IBM has multiple auto companies as customers), but switched to tech because she had a passion for tech but not for autos. It was the difference between a mere "job" and a "career," she said.

Similarly, when Benioff interviewed Diane Greene, Google (Nasdaq: GOOG) Cloud senior vice president, earlier in the week, she said she started in the oil business but switched to tech early in her career. (See Google's Diane Greene Opens Up on Her Life & Career.)

Benioff asked if IBM's founders were still around when Rometty started at IBM. Rometty's response got another big laugh. "How old do you think I am?" she said. "IBM is 106 years old. I am the ninth CEO, not the third."

Fast-forward to today, and the challenges IBM -- and society -- face. "Data will be one of the key issues of our time," Rometty said. "Clients have trusted us with their most precious asset, which is their data."

IBM's principles regarding customer data: "Your data is yours, not mine to give away," Rometty said. Similarly, the customer owns the insights from artificial intelligence. And the customer decides what country data resides in, not the government.

"We're the only tech that has never given government access to data," she boasted.

AI will be transformative, which creates enormous responsibility for companies such as IBM and Salesforce that are pioneering the technology, Rometty said. "Things like AI -- it is our job to usher those safely into the world," she said. (See At Dreamforce 2017, Salesforce Doubling Down on AI.)

Next page: Watch out for AI 'fearmongering'

th3j4ckl3 12/19/2017 | 2:30:32 AM
How many quarter revenue fails under her leadership? the stock has fallen from about $194 when CEO Ginni Rometty took control to the recent $160 -- a 17.5% decline over five years. And that is after spending $9 billion on payouts (mostly share buybacks) to prop up the stock!  22 quarterly growth failures.  And nobody including shareholders fails to ask why she is still holding her position?  Anyone else would have been asked to resign.  Blue chip stock no longer.

kq4ym 11/22/2017 | 4:05:50 PM
Re: A bold statement? Yes that is curious about why the government hasn't received anything from them. And it would be interesting to have some response to company revenues that " have declined 22 consecutive quarters." Wonder if that has any correlation to non-disclosures to the government. Not likely I'm sure, but who knows.
Reply | Post Message | MESSAGES LIST | START A BOARD

mhhfive 11/13/2017 | 7:08:51 PM
Re: A bold statement? IBM isn't losing money -- it's just not making as much as it used to. IBM is still profitable, so it's a bit easier to "switch out the engines" in mid-flight when you still have enough altitude. It's a lot harder when you're still on the runway or closer to it.
Reply | Post Message | MESSAGES LIST | START A BOARD

danielcawrey 11/13/2017 | 4:00:44 PM
Re: A bold statement? This is really good - keep the core values, embrace change. The problem is keeping everything flying when you are switching out the engines midflight.
Reply | Post Message | MESSAGES LIST | START A BOARD

Wow. I'm not sure exactly how impressed I should be by that. Does that essentially mean that the government has never asked? Or that IBM has refused government requests so effectively that no one has heard of their refusals? It may be a bit unwise to boast about this -- because it may take only one government request now from the current administration to make her regret this.

On the other hand, maybe IBM simply doesn't have the right customers for the government to be interested in? Apple only hands over data to the government because apparently its products are so popular that even terrorists and criminals use them. I'm sure there are plenty of unpopular tech companies that have never handed over data to government officials simply because their products/services were never the subject of an investigation.
Reply | Post Message | MESSAGES LIST | START A BOARD
EDUCATIONAL RESOURCES