HPE: Can the New Boss Bring Back the Magic?

Meg Whitman was a wartime CEO for Hewlett Packard Enterprise. Now, she says, the company needs new leadership -- Antonio Neri, a technologist who came up through the company ranks.

In a transition announced last week, Whitman is leaving the CEO position in February, replaced by Neri, a 22-year company veteran and current president, who heads up enterprise technology solutions and services. (See HPE CEO Whitman to Leave, Soon After Saying She's 'Not Going Anywhere' .)

Neri inherits a company that's leaner than the one Whitman took charge of in 2011. The old Hewlett-Packard split in 2015 under Whitman into Hewlett Packard Enterprise and HP Inc., comprising the old HP's PC and printer business.

Subsequently, HPE divested great swathes of its software and services business, while acquiring a couple of smaller specialist firms. (See HPE Spins Software Business to Micro Focus for $8.8B .) 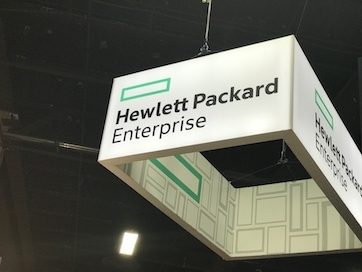 The perfect person
"Meg seemed like the perfect person at the right time for downsizing and rightsizing and streamlining of HP, and focusing on core competencies," GlobalData analyst Brad Shimmin tells Enterprise Cloud News.

Ovum analyst Mike Sapien agrees. Whitman was "great for the high level," identifying the major HP divisions and separating them and successfully "making hard decisions about these business units." But HP and later HPE didn't "get cloud business aligned until late in the game," Sapien says.

But it was time for Whitman to move on and turn the company over to leadership more suitable to its next phase.

Innovation will be key to Neri's success, Shimmin says. "Antonio is a journeyman that has a lot of moxie when it comes to innovation, and driving the company forward."

Neri came up through the ranks after starting as a call center engineer, and his long history with HP will project stability to customers, Shimmin adds. He won't be seen as a "serial CEO."

HPE needs someone who can run the company with a view beyond "just selling more boxes against Dell EMC, Cisco, et. al," 451 Research analyst Melanie Posey said in an email to Enterprise Cloud News. "Neri can also provide "a technology roadmap that involves platforms, not boxes -- with hooks into third-party cloud services and full stack automation/orchestration capabilities that help customers manage their IT environments regardless of whether the gear is on-premises or off-premises."

HPE helps enterprises with deep IT investments transition those investments into assets, becoming more cloud- and mobile-friendly, and embracing opportunities such as Internet of Things, Shimmin says. "It's not a cloud company but will thrive in a world of cloud companies," he says.

In particular, HPE's wireless capabilities, stemming from the company's 2015 acquisition of Aruba, gives HPE an advantage in the Internet of Things market, Conde says. (See HP Sets Sail for Aruba.)

The middle game
HPE describes its mission as "hybrid IT," combining legacy infrastructure, private cloud, multiple public clouds, edge computing, and Internet of Things. (See HPE Goes All in With Hybrid IT.)

Whitman handled the opening of that transition. Now it's up to Neri to handle the "middle game," Shimmin says. "Now we have all the pieces positioned on the board; we need to find a winning attack."

kq4ym 12/8/2017 | 9:11:39 AM
Re: Cloud It will be interesting to HPE go from it's employee shedding phase to the so-called innovative phase under Neri. Whether the downsized staffing and new innovation in thinking and services will make a profitability advantage remains to be seen.
Reply | Post Message | MESSAGES LIST | START A BOARD

Phil_Britt 11/29/2017 | 7:20:41 PM
Re: Cloud The timing of the announcement still seems a little "off" to me, HPE doing OK, nothing has emerged about boardroom issues....Maybe Whitman needs to separate herself for a certain length of time before going to a competitor.
Reply | Post Message | MESSAGES LIST | START A BOARD

mhhfive 11/29/2017 | 3:12:21 PM
Re: Cloud I assume there may be a more telling book in the future about this transition. Maybe not as popular as the Steve Jobs biography, but I think someday, many people will wonder what really happened. But perhsps the true story is just too boring? (eg. HPE simply didn't perform as well as it was expected to, and innovation didn't happen fast enough...)
Reply | Post Message | MESSAGES LIST | START A BOARD

Mitch Wagner 11/28/2017 | 2:06:12 PM
Re: Cloud IBM seems to do pretty well selling cloud to existing IBM shops. Whether they can expand significantly to a new base remains to be seen.
Reply | Post Message | MESSAGES LIST | START A BOARD

danielcawrey 11/27/2017 | 11:34:08 AM
Cloud It would seem the cloud was totally missed by this company. I feel like HPE and IBM are in similar spots where they are still trying to figure cloud out. Amazon, Microsoft and Google are clearly ahead in this space.
Reply | Post Message | MESSAGES LIST | START A BOARD
EDUCATIONAL RESOURCES